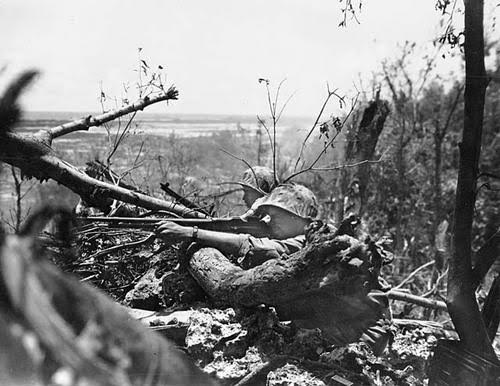 Pfc. John D. New was a member of The Old Breed. That title was given to the first division-sized, amphibious striking force in the U.S. military. The Marines of The Old Breed spearheaded the first major offensive in the Pacific war at Guadalcanal. John D. New fought alongside his fellow Marines at Guadalcanal, Cape Gloucester and finally gave his life, fighting in that hellhole called Peleliu.

John Dury New was born in Mobile, Alabama, on August 12, 1925. His parents were Jessie James New and Mary M. Gambel New. He attended St. Joseph’s Parochial School and other public schools in Mobile. After the Japanese attack on Pearl Harbor, John New was the first Mobile man to join the military when he enlisted in the Marine Corps on December 8, 1941. He arrived at Parris Island, South Carolina, on December 12 and joined the 4th Recruit Battalion. Following the completion of basic training, he briefly served at Quantico, Virginia.

In September 1942, Private John New was assigned to the 4th Replacement Battalion, Fleet Marine Force Training Center at San Diego, California. The following month, he was assigned to the 2nd Battalion, 7th Marines, 1st Marine Division and sent overseas to take part in the invasion of Guadalcanal. The Battle of Guadalcanal ended on February 9, 1943.

The Battle of Cape Gloucester began with an amphibious assault by the Marines on December 26, 1943. Private John New took part in the battle, defending an airfield once it was captured.

By April 1944, New had been promoted to Private First Class and shipped to Pavuvu in the Russell Islands for rest and relaxation.

On September 15, 1944, Pfc. New and the 2nd Battalion, 7th Marines were part of the invasion of Peleliu by the 1st Marine Division. Nine days later, Pfc. John D. New would be dead.

Peleliu was not supposed to be the deadly slugfest that it became before the Marines finally declared it secure. There was much debate about the need for the invasion. Peleliu is part of the Palau Islands that lie some 500 miles to the east of Mindanao in the Philippines. General MacArthur felt his planned invasion of the Philippines would be endangered if Japan continued  to occupy its bases in the Palaus.

On the 25th of September, Pfc. John New and two other Marines were on Peleliu directing mortar fire against enemy gun emplacements. Suddenly, a Japanese soldier emerged from a cave in a cliff and hurled a grenade that landed where the Marines were located. With complete disregard for his own life, Pfc. New dove on the grenade, absorbing the full impact of the explosion, thus saving the lives of the other two Marines. For this heroic action. Private First-Class John D. New would be awarded the Medal of Honor posthumously.

The unselfish actions of someone such as Pfc. John D. New are described in the Bible:

“ Greater love hath no man than this, that a man lay down his life for his friends.”

The Medal of Honor was presented to Pfc. New’s father on June 23, 1945, at Naval Air Station, Pensacola, Florida by Rear-Admiral C.A. Pownall.

John D. New’s body was originally buried at the U.S. Armed Forces Cemetery on Peleliu. It was disinterred and reburied at Mobile National Cemetery in Mobile, Alabama in 1948.

In 1946, the U.S. Navy commissioned the destroyer USS New [DD-818] in honor of Pfc. John D. New. The City of Mobile, Alabama renamed its Cottage Hill Park as Medal of Honor Park in memory of Pfc. New in August 2001.

Words cannot adequately convey the horrors of war and the total feeling of helplessness and rage experienced by the soldier who has lost a buddy. The bloody battle on Peleliu that cost the lives of so many like Pfc. New is graphically described in the acclaimed book, “With the Old Breed at Peleliu and Okinawa” by Eugene B. Sledge of Mobile, Alabama. The following is a quote from Sledge’s book:

“The corpsman was on his knees bending over a young Marine who had just died…A blood-soaked battle dressing was on the side of the dead man’s neck. His fine, handsome, boyish face was ashen. ‘What a pitiful waste’, I thought. ‘He can’t be a day over 17 years old.’ I thanked God his mother couldn’t see him. The corpsman held the dead Marine’s chin tenderly between the thumb and the fingers of his left and made the sign of the cross with his right hand. Tears streamed down his dusty, tanned grief-contorted face while he sobbed quietly.”

May we never forget the young men and women who have sacrificed so much for our country. Every day is Memorial Day.  We can never give them the honor they deserve.

[Sources: Wikipedia; cmohs.org; National Medal of Honor Museum; marinemedals.com; “With the Old Breed at Peleliu and Okinawa by Eugene B. Sledge] 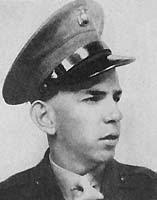