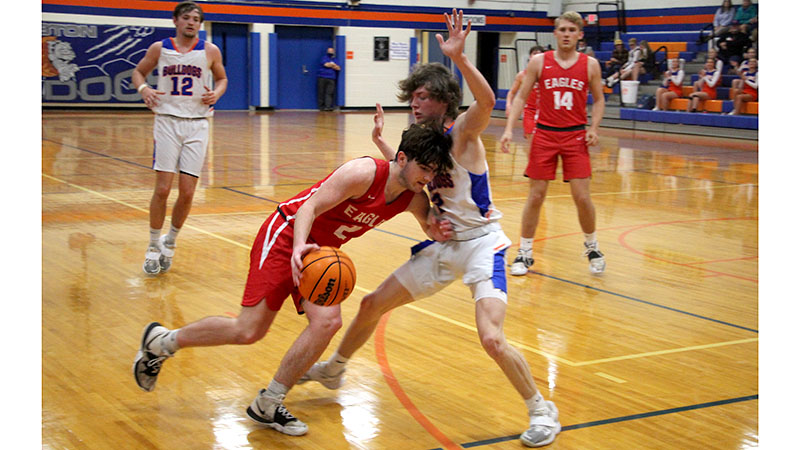 Pleasant Home's Mason Anderson tries to get inside against a Kinston defender.

Pleasant Home fell just short in a hard-fought in the 1A Area 2 semi-final contest at Kinston Wednesday, 59-57, ending the Eagles’ season.

In a game that saw multiple lead changes, it was the Eagles were down late. A three pointer by Mason Anderson cut the lead to a single point with less than a minute to go. A foul shot by Kinston made it a two-point game down the stretch. With 6.5 seconds on the clock, Pleasant Home had one more chance to tie the game, but was not able to convert.

The first period set the tone with both teams coming away with 15 points.

Points came a bit slower in the second period as Kinston took a slight edge going into the half, 25-23.

Led by Ethan Curry’s two three pointers in the third and a bucket at the buzzer, Pleasant Home took a one-point lead by the end of the third, 43-42.

Kinston came out hot in the fourth period and took a 52-50 edge, but Curry came through with another three-pointer to make it a two-point game with 3:40 left to play. Two free throws converted by D. Purifoy evened the score a few seconds later.

Once again though, Kinston scored consecutive buckets to go back up by four. Anderson nailed the three to give Pleasant Home a chance to tie, but the buzzer sounded with Kinson ahead 59-57.

Leading the Eagle offense was Curry with 21 points and Anderson finished with 18 points.

The area champion will be determined Saturday when Kinston travels to Florala. Tipoff is scheduled for 2 p.m.