WILDCATS ADVANCE TO AREA CHAMPIONSHIP: Florala dominates Samson to head to the Class 1A Area 2 championship, 78-19 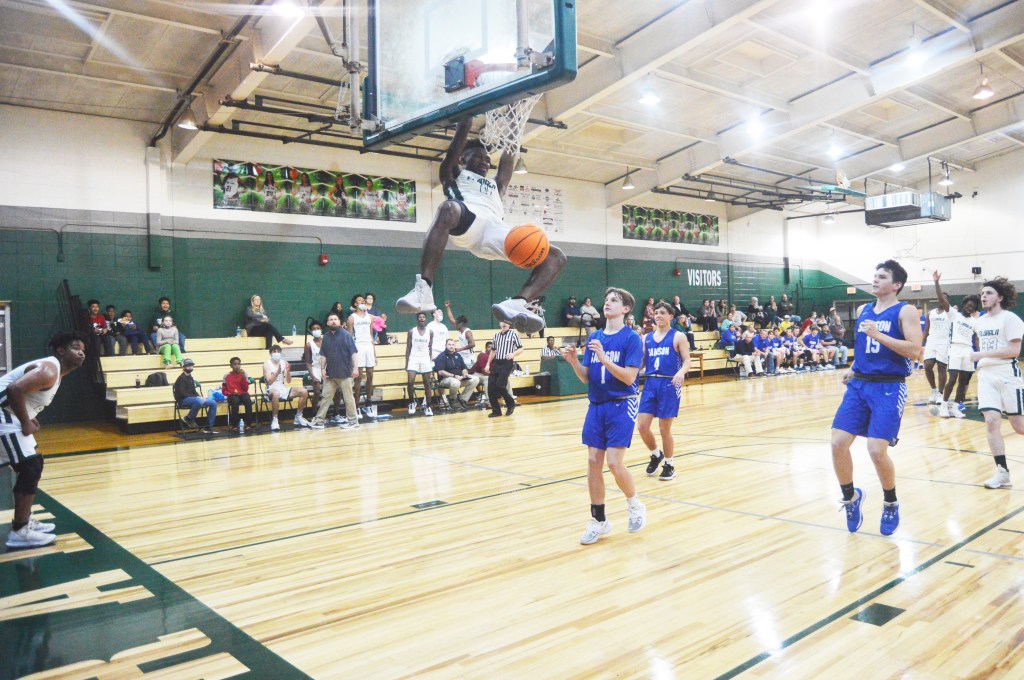 The Florala High School boys varsity basketball team held Samson to zero points in the fourth quarter to advance to the area championship, 78-19.

It was a close game until about four minutes to go in the first period when Florala exploded on the court.

Mehki James had a lay up to start then a three-pointer from Rayshon Coleman and a steal and lay up from Rashaad Coleman pushed the Wildcats to 13-4.

Rashaad Coleman opened the second period for the Wildcats with a lay up to increase the Wildcat lead 23-5.

Anthone Stone followed with a lay up and Rashaad Coleman hit a three-pointer after that to go up 28-5.

With 5:21 left in the half, Samson hit a lay up to make it 28-7, but Rashaad Coleman answered with a lay up of his own. Will Reese hit a three-pointer to increase the Wildcat lead 35-7.

After a lay up from Rashaad Coleman with 2:33 left in the half, Samson got on the board again with a three-pointer to make it 37-10.

With 1:35 remaining in the half, James had a steal and passed it off to Rashaad Coleman for the lay up. Samson then hit another three-pointer, but Stone answered to make it 41-13.

To end the half, James passed again to Rashaad Coleman who put it in with 25 seconds and then James had a lay up with six seconds left to go up 45-13 at the half.

James then opened the third period with a lay up, but Samson scored a three-pointer, which was answered by Florala’s Stone to make it 49-16.

Rashaad Coleman then went on a scoring streak, hitting a three-pointer and a jump shot to go up 59-16 with 3:55 left in the third period.

Samson hit a three-pointer with 3:20 to go in the third, but Rashaad Coleman had a huge dunk with James having a steal and lay up after to increase the Wildcat lead 65-19.

With 47 seconds left in the third period, Jamon Mitchell had a lay up to make it 69-19.

Zane Weeks had a lay up with three seconds left to end the third period with the Wildcats up 71-19.

The fourth period was all Wildcat territory with several seventh and eighth graders coming on the court, holding Samson to zero points.

Zane Weeks had a lay up and eighth-grader Rayshon Coleman threw down a one-handed dunk with 50 seconds left in the game to end the scoring effort at 78-19.

Rashaad Coleman led the scoring effort for the Wildcats with 27 points and six rebounds. Rayshon Coleman had 12 points and five steals. Anthone Stone had 10 points and 11 rebounds. Mekhi James eight points and seven assists and Zane Weeks had 8 points and 7 rebounds.

“The main focus of tonight’s game was to just play well,” FHS head coach Troy Turman said. “We got off to a little bit of a slow start, but we had some good practicing leading up to the game and the main focus was to just play well and I thought we did that. We tried to get our main players in a rhythm, but I thought everybody contributed well and everybody played well. There at the fourth quarter, we had five underclassmen that didn’t allow a point. They played hard and we are looking forward to those young guys getting more playing time next year.”

Moving to the area championship, Turman said they are focusing on themselves.

“We are really just focused on us right now,” Turman said. “We just need the ball to go into the hoop and we need some confidence shooting the ball. We need to play our style of basketball, which is getting up and down the floor, taking care of the basketball, making open shots and guard, box out and rebound. Once we work the kinks out the first three or four minutes of the game, we started making plays. We are going to need everybody moving forward.”

The Wildcats will take on Kinston in the area championship on Saturday at 2 p.m., in Florala.