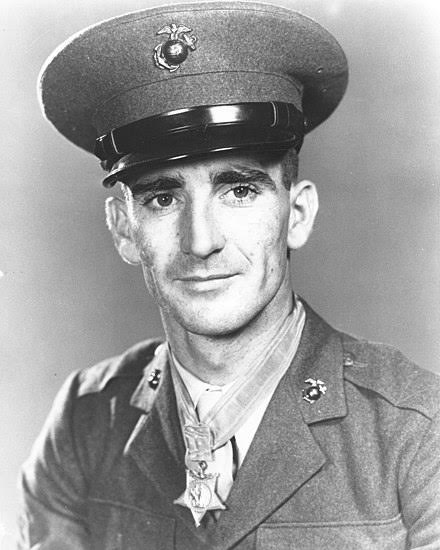 Pfc. Alford L. McLaughlin had volunteered for his second continuous duty assignment in Korea when, on the night of September 4-5, 1952, he became a one-man army, defending his outpost against hoards of Chinese Communist soldiers. That action would earn him the Medal of Honor.

Alford Lee McLaughlin was born March, 18, 1928 in Leeds, Jefferson County Alabama. His parents were Max G. McLaughlin and Annie Billups McLaughlin. He attended public schools in Leeds until 1944 and enlisted in the Marine Corps on May 3, 1945. After completing basic training at Parris Island, South Carolina, he was sent to Camp Lejeune, North Carolina, then on to Guam in November 1945. He was ordered to Japan to serve with the occupation forces in March 1946. McLaughlin served in several posts with the Marine Corps until he was sent to Camp Pendleton, California in February 1952, for further training before departing for Korea in February 1952. He would be serving with the 1st Marine Division.

The Korean War is sometimes referred to as The Forgotten War. At the end of WW II, the Korean peninsula was divided along the 38th parallel and placed into an international trusteeship with Soviet forces occupying the north and Allied forces occupying the south. It was thought that the arrangement would end at some point in the future when Korea was deemed ready for self-rule. The Korean question was referred to the United Nations in 1948.

On June 25, 1950, more than 75,000 soldiers from the North Korean People’s Army [PVA] poured across the 38th parallel into South Korea. The United Nations Security Council voted to come to South Korea’s aid and by July, U.S. and U.N. forces had entered the war on South Korea’s behalf. On October 19, the Korean War escalated into a major conflict when the Chinese People’s Liberation Army [PVA] poured south across the Yalu River to aid their North Korean neighbors.

After two years, the fighting was almost at a stalemate with the opposing forces facing each other along a central line in Korea, called The Jamestown Line. The 1st Marine Division was defending part of that line in a defensive position called Bunker Hill. That defensive battle would be called the Battle of Bunker Hill and would last from August 9 – September 30. One of those defenders was Pfc. Alford L. McLaughlin of India Company, 3rd Battalion, 5th Marine Regiment. Parts of his battalion were defending a section of Bunker Hill called Outpost Bruce in the early morning hours of September 5-6.  India Company had suffered a savage barrage of artillery and mortars when they were attacked by overwhelming numbers of enemy infantry. Pfc. McLaughlin set up plans for the defense of his platoon and proceeded to singlehandedly

turn back the attack. Alternately using two machine guns, a carbine and grenades, he laid down a devastating fire upon the attackers. Although painfully wounded, he continued firing the machine guns from the hip until his hands were blistered by the hot weapons. When that happened, he laid the machine guns on the ground to cool, picked up the carbine and grenades and continued the fight. Standing up in full view of the enemy, McLaughlin shouted encouragement to his platoon-mates. When the attack had been turned back, an estimated 200 Chinese PVA soldiers lay dead or wounded near McLaughlin’s position. His courageous stand, with no fear for his life, inspired a gallant defense by his fellow Marines that saved Outpost Bruce from being overrun. McLaughlin’s heroic actions won him the Medal of Honor.

Pfc. McLaughlin’s citation for the Medal of Honor reads:

“For his conspicuous gallantry and intrepidity at the risk of his life above and beyond the call of duty while serving as a Machine Gunner of Company I, Third Battalion, Fifth Marines, First Marine Division [reinforced], in action against enemy aggressor forces in Korea on the night of 4-5 September 1952. Volunteering for his second continuous tour of duty on a strategic combat outpost far in advance of the main line of resistance, Private First Class McLaughlin, although operating under a barrage of enemy artillery and mortar fire, set up plans for the defense of his platoon which proved decisive in the successful defense of the outpost…..[describes the action above]….His outstanding heroism and unwavering devotion to duty reflect the highest credit upon himself and enhance the finest traditions of the United States Naval Service.”

Pfc. Alford L. McLaughlin was presented the Medal of Honor by President Dwight D. Eisenhower at the White House on October 27, 1953. He was the 33rd United States Marine to receive that honor for the Korean War.

After the Korean War, McLaughlin served as a Military Policeman at Camp Lejeune, North Carolina and with the 4th Marine Corps Reserve Rifle Company at Rome, Georgia. He married Kathryn West in 1953 and they had one son. McLaughlin was serving with the 10th Marines at Camp Lejeune when he retired in 1972 as a Master Sergeant.

Laughlin died on January 14, 1977 at the age of 48 and was buried at Mount Hebron Cemetery in Leeds, Alabama. Leeds was also the hometown of two other Medal of Honor recipients: William R. Lawley, Jr. and Henry E “Red” Erwin, both from WW II.

REMEMBER WHEN: History trivia on Covington County and Andalusia