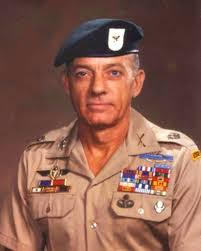 “You can’t be Mize, He’s dead,” replied the officer. To tell the truth, Mize should have been dead. The battle that Sergeant Ola L. Mize had endured over the last day and a half had nearly taken his life. His fearless and courageous actions during the battle would earn him our nation’s highest honor.

Ola Lee Mize was born August 28, 1931 in Albertville, Alabama to Herbert A. and Lula Belle Barry Mize. His father was a sharecropper. Ola was forced to leave school in the ninth grade to help the family put food on the table. After several low-paying jobs, one earning just $15 per week, Mize tried to enlist in the Army. On his first attempt, he was rejected because he only weighed 120 pounds. He returned later after putting on a few pounds. He still had to overcome a greater problem because he had lost an eye when he was five years old. During the eye exam, Mize faked switching the paddles over the blind eye [a trick he had practiced at home with spoons]. He was finally able to join the Army in 1950.

After basic training, Mize joined the 82nd Airborne Division. He was planning on completing his tour and going to college but the Korean War interrupted his plans. He decided to re-enlist and volunteered for combat on the front lines. He joined K Company, 15th Infantry Regiment, 3rd Infantry Division.

As he had requested, Mize soon found himself on the front lines, manning a critical post in a mountainous area near Surang-ni in South Korea called Outpost Harry. The order had come down from General Maxwell Taylor, “Hold Harry at all cost.” The outpost was located several hundred yards away from the American lines and about the same distance from Communist lines. On several nights prior to the night of June 10, 1953, Mize had observed enemy trucks bringing in large numbers of men and equipment. Each time, he had called in artillery strikes and air strikes, only to have them denied. One officer told Mize, “Sergeant, they’ve got to re-supply their men just like we do, “ insinuating that the traffic Mize had seen was nothing out of the ordinary. Mize replied, “Well, with 40 or 50 trucks a night, there must be a whole Chinese army behind the hills over there.”

On the night of June 10, Mize received a report from a weapons squad leader that something didn’t seem right about the terrain in front of his post. Mize quietly made his way over to the location in a trench and asked about the problem. The squad leader said that the terrain just didn’t seem the same as before. Mize climbed over the top of the trench and said, “Where the Hell did all them bushes come from? I don’t remember them being there before.” There were bushes all over the place, about 10 yards from their trench. Mize continued, “ About that time, a few of the bushes moved and I just automatically started spraying the bushes. There was bodies falling all over the place. About that time, they kicked off the artillery, I mean they opened up, I thought the end of the world was coming. I started sand-bagging everybody in and as I was putting the sand bags in, an artillery round hit right behind me. I thought I was blowed all to pieces. It drove me into the timbers there in the back of the bunker. When I got my conscious back, my Medic had about six of them on top of him and they killed him before I could get to him. Well, I done them the same favor.”

As he went by the heavy machine gun position he noticed that his BAR man and his assistant were in a bunker without any weapons. They had left them outside the bunker when an artillery round hit. Mize told the two men to load his empty carbine magazines with a case of carbine ammunition that was in the bunker. About that time, the Chinese came pouring over the trench-line.

Mize continued, “The next two hours I was shooting Chinese. We was filling that trench up as fast as they’d come over that trench-line. The two guys were re-charging my magazines. Finally, I told them to come with me. We climbed over stuff and just as we were coming to the command bunker, we saw another BAR man fighting with six Chinese who were trying to capture him.”

Mize shot the six Chinese. He chastised the BAR man for fighting rather than just shooting the Chinese. It turned out that the 10 round ammunition clips that they had been given were loaded with carbine rounds. None of the M-1 rifles nor BARs could use the 10 round clips. Mize went over and checked the dead U.S. soldiers and they all had M-1s or BARs with 10 round carbine clips that were useless. Mize was infuriated. With all of the officers dead or wounded, Mize frantically established a defensive perimeter. Then he came up with an ingenuous plan of deception. He assembled a patrol that moved from bunker to bunker, hurling grenades and firing rifles, then quickly moving on to another bunker. That tactic made their force seem larger to the Chinese. Although wounded three times by artillery fire and grenade blasts, Mize continued to fight. At one point, a Chinese soldier stepped out and brought his gun to bear on a U.S. soldier. Mize dropped him before he could shoot.

Mize would later say that, “I thought I’d bought the farm. I just knew I was going to die. I knew it. I accepted it. All I wanted to do was to take as many of them with me as I could.”

At dawn the next morning, Mize regrouped and formed a counterattack that routed the Chinese from the area. By one account, Mize had killed more than 65 enemy soldiers. He later said that when he saw an officer’s throat cut, “ I just went kind of battle crazy.” Of the 56 Americans at Outpost Harry, only eight survived.

Sergeant Ola L. Mize was recommended for the Medal of Honor but initially refused, saying, “It should go to the troops who died defending Outpost Harry.” He finally received the Medal of Honor in 1954 from President Dwight D. Eisenhower.

Ola Mize remained in the Army after Korea and became an officer. He attended the Special Forces Officers Course in 1962 and was assigned to the 7th Special Forces Group upon graduation. In late 1963, he deployed to Vietnam with the 5th Special Forces Group as an A Team Leader. As a Green Beret Camp Commander, he helped train local Vietnamese people to oppose the Viet Cong. In 1965, Mize was assigned to the Special Forces Training Group at Fort Bragg, North Carolina. As head of the Advanced Training Committee, he was responsible for the HALO, SCUBA, and SKYHOOK schools. He was credited with starting the Combat Divers Qualification Course at Key West, Florida.

Mize returned to Vietnam in 1966-67 and again in 1969 where he was Commander of the 3rd Mobile Strike Force [Cambodian Troops]. He was nominated for a second Medal of Honor but Secretary of Defense Robert McNamara turned it down “because Mize was an officer and had already received one.” In 1975, Mize, who was now a Colonel, was assigned as Chief for the Special Forces School, Field Training Division at Fort Bragg. He later became Commander of the school, then known as the U.S. Army JFK Institute for Military Assistance. The school was later renamed the Special Warfare School. Colonel Ola L. Mize retired in 1981. Besides the Medal of Honor, his awards included the Silver Star, Legion of Merit [with Oak Leaf Cluster], Bronze Star [with four Oak Leaf Clusters], Master Parachutist Badge, Ranger Tab, SCUBA Badge and Combat Infantryman’s Badge [second award].

After retirement, Colonel Mize moved to Gadsden, Alabama where he was involved in military affairs and often gave motivational speeches. When introduced, he always asked that he be introduced as a Christian first, before the Medal of Honor. Ola Mize died on March 12, 2014 at the age of 82. He was buried at Crestwood Memorial Cemetery in East Gadsden, Alabama. Colonel Mize was survived by his wife, Betty Jackson Mize, one daughter and several grandchildren and great-grandchildren. Just four months prior to Mize’s death, The Ola Lee Mize Patriots Park and War Memorial Museum located at Noccalula Falls State Park had been dedicated and named for the Colonel.

On May 14, 2015, the 50th anniversary of the Special Forces Underwater Operations School at Key West, Florida, the Headquarters and Administration Building was named for Colonel Ola Lee Mize.