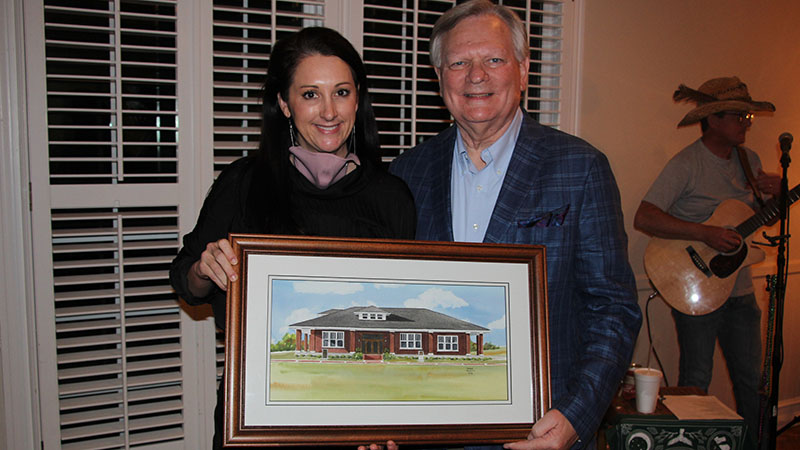 Andalusia Mayor Earl Johnson presents former Chamber Director Chrissie Duffy with a custom painting of the chamber office as a gift of appreciation for her eight years of service.

Earlier this month, Duffy was named the Directory of Institutional Advancement at LBW Community College, ending her eight-year tenure as the leader of the local chamber of commerce. 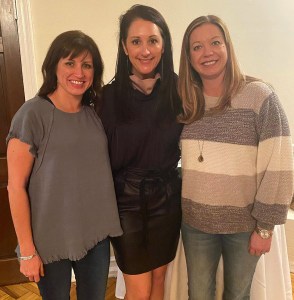 Duffy (center) with Lynsey Williams, left, and Jennifer Curry who worked together to plan the surprise party for the former director.

The going-away gathering held Thursday at the Andalusia County Cub was organized as a surprise to Duffy. During the event, she was presented with a gift basket filled with items donated by chamber businesses as well as a framed custom painting of the renovated chamber office.

“The chamber has been my home for the past eight years and my time there has been a blessing,” Duffy said. “Getting to be a part of all the excitement, growth and fun that comes with putting together our chamber events … I’m the one who has gained from this experience. From day one, I had unending support from the people in this room and it made my job much easier. I will be a forever advocate and ambassador for the City of Andalusia and the chamber of commerce.”

Andalusia Mayor Earl Johnson said that Duffy’s efforts as chamber director will have a lasting impact on the city.

“Chrissie has played a huge role in turning Andalusia into one of the great cities in the South. All of the board members and chamber members agree that it is a different organization now. It has changed our city. Christmas certainly would not be the same without Chrissie,” Johnson said.

Currently, Maggie Holmes is serving the chamber as its Director of Membership Services. Members of the board of directors are working to advertise for executive director candidates. Chamber Board President Mark Chambers said he hopes the position will be filled by April.

“Chrissie certainly leaves big shoes to fill, but she did a great job in setting us up for success. The board will work over the coming weeks to find the right person to lead our chamber moving forward,” Chambers said.

Meanwhile, the chamber is still holding events, such as a “Starting a Business” seminar held Wednesday, and the annual banquet is scheduled for April 22.