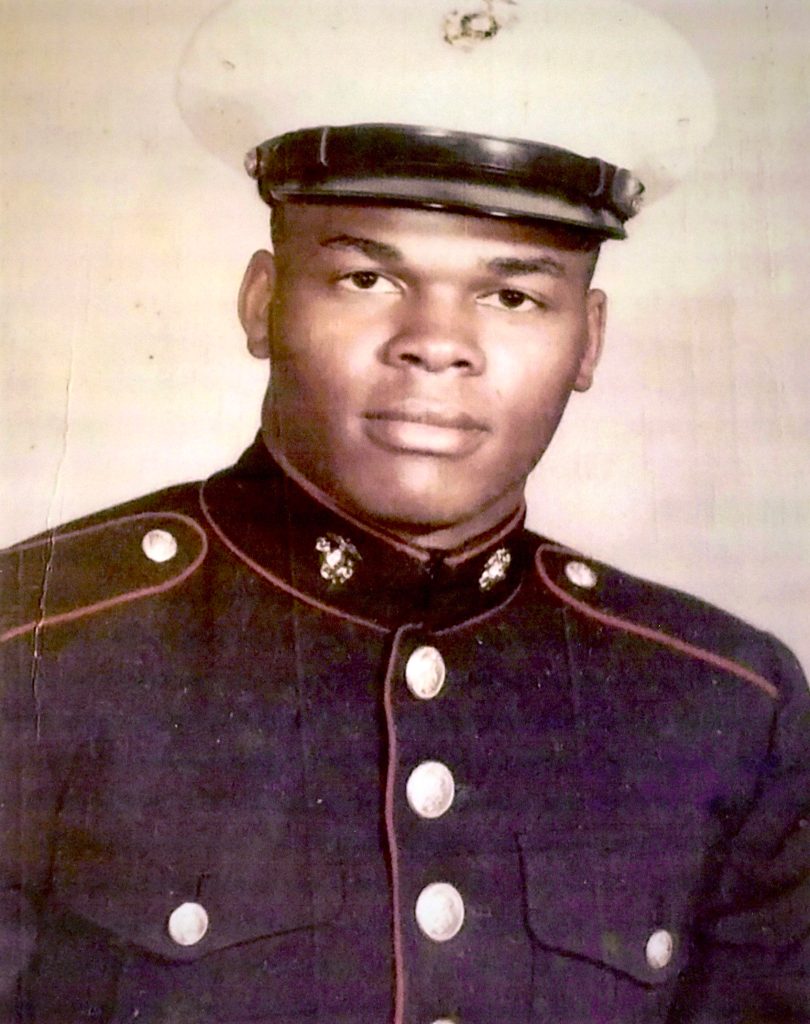 Willie Locke and Mortar Squad #8 were busy pumping round after round into the oncoming North Vietnamese assault. Willie suddenly found himself blown several yards from the bunker, disoriented and said, ‘Where did that round come from?’ About that time, one of my buddies from the mortar squad came over and said ‘Man, you’re bleeding all over!’ That’s when the Corpsman came over.”

Willie James Locke, Jr. was born November, 16, 1947 to Willie Gene Locke and Daisy Tucker Locke in Evergreen, Alabama. He attended Conecuh County Training School and graduated in 1966. Willie was an outstanding baseball player and received a scholarship offer from Stillman College in Tuscaloosa. He decided not to go to Stillman but did not want to continue working on his parents farm. For a change, he decided to go visit his Uncle Herman Locke in New Jersey.

After arriving there, he went to work at a gunpowder factory. In December of 1966, Willie received his draft notice. He was given his choice of the military services and decided on the Marine Corps because “I liked those dress blues.”

Upon completing basic training at Parris Island, South Carolina, Willie was honored as one of two outstanding recruits in the 3rd Recruit Battalion and allowed to wear those special dress blues. From Parris Island he went to Camp Lejeune, North Carolina where he trained as a squad member on an 81 mm. mortar. From there, he was sent to Camp Pendleton, California for Advanced Infantry training. He joined the Headquarters Company, 3rd Battalion, 9th Marines of the 5th Marine Division. After several weeks, the battalion boarded a plane and flew to Okinawa for two weeks of jungle training. From Okinawa, they flew to Dong Ha Combat Base in Quang Tri Province.

In early June 1967, Willie was sent to the firebase at Khe Sanh, which had been under heavy attack by the North Vietnamese. After their arrival,  Willie’s mortar squad was deployed on a perimeter just outside the main base. There were eight mortar squads of eight men each. Willie was the eighth man on the eighth squad.

On September 10, all of the mortar squads were under heavy attack by B-40 Russian rockets [rocket propelled grenades called RPG-7s]. Suddenly, Squad #7 took a direct hit. The explosion killed Willie’s best friend that he had met at Camp Pendleton. Shortly after that, Willie and Squad #8 sustained a hit just outside their bunker. Their bunkers were gun pits surrounded by sand bags. Four men of Squad #8 were seriously wounded, including Willie, who sustained a shrapnel wound in the left arm. The four men were evacuated by helicopter and taken to a hospital at Dong Ha.

After a couple of weeks treatment, Willie was sent back to Khe Sanh . The Khe Sanh firebase sat atop a hill overlooking the DMZ [demilitarized zone]. Its close proximity to the DMZ made it a constant target for the North Vietnamese. By June 1968, the attacks became more frequent and more violent. On June 25, the North Vietnamese began attacking in waves. The mortar squads overlooked the frontline Marines who were in trenches. Willie remembered the way the enemy attacked, “The first wave piled onto the triple-concertina barb wire. The second wave climbed over them and the third wave came on after that.”

Willie doesn’t remember the exact moment when he was hit. Mortar Crew #8 was busy firing mortars when a rocket landed just outside their gun pit. The next thing he remembered was lying on the ground outside the gun pit, helmet missing and bleeding from a piece of shrapnel that was lodged in the top of his head. Willie said, “ I was a little wobbly but I never lost consciousness.” A Navy Corpsman came up to him and said, “You’re bleeding from the head and we need to get you to the Aid Station.” Willie was placed on a litter and carried a short distance to the Aid Station [or sick bay as it was called by the Marines]. He was examined by a doctor who ordered Willie to be evacuated to the base hospital at Dong Ha.

At Dong Ha, Willie was patched up and kept under observation for three or four days. After that, he was sent back to Khe Sanh and placed on light duty for several days before rejoining his mortar unit. He stayed at Khe Sanh  through August and was sent back to Dong Ha in September. From there he was flown to Okinawa where he stayed at the medical facility for three or four weeks. After that he was pronounced “OK” and was flown to Hawaii and then on to San Francisco.

Willie says that he will never forget the “welcome” they received after landing at San Francisco. Before the plane landed, an officer warned them about the “reception” that they would receive. Even though he was told what to expect, Willie said that he was not prepared for the “Screaming, spitting, and vile curse words that came from the mob of protesters. They held signs with every imaginable vulgar word and pictures. We were called ‘baby killers’ and worse.” It took 20 or 30 minutes to make it through the mob before they arrived at the gate for their plane home.

Willie flew to Atlanta and then on to Montgomery where his brother met him at the airport to drive him home.  He was able to spend three weeks at home before reporting to his next duty station at Camp Lejeune. Willie was a Sergeant by now and he was put in charge of the rifle range. While at Camp Lejeune, Willie found time to marry this high school sweetheart, Emma Samuels. They were married in Evergreen on September 6, 1969. Emma stayed in Evergreen and Willie returned to Camp Lejeune where he was honorably discharged in March 1970. Willie’s decorations included the National Defense Medal, Vietnam Service Medal [with three stars], Vietnam Campaign Medal [with device], Purple Heart [with one star], Presidential Unit Citation, Combat Action Ribbon and Good Conduct Medal.

Willie tells a humorous story about how he came to become a Postal Worker. The Marine Corps required each soldier being discharged to state where they would be working. Willie said, “ I’m gonna go home, sit in a rocking-chair and relax.” The Marine Corps wouldn’t accept Willie’s job description and told him that he would have to enroll in a study course for a particular job that he might apply for. The Marine Captain encouraged Willie to enroll in the Postal Service course. Willie completed the course and the examination that followed. When he was discharged, he was given three possible job openings with the Postal Service in Atlanta, New Orleans and Andalusia. The Postal Service wanted Willie to go to New Orleans but he chose to try for the one nearest his hometown, Andalusia.

Willie arrived in Andalusia in 1970 and was interviewed by Postmaster Henry Lee Mullins. At the conclusion of the interview, Mullins told Willie that he had two more interviews before deciding who he would hire. Willie said, “ I reminded Mr. Mullins that I had a 10 point veteran’s bonus which put me at the top of the list.” Willie got the job and spent the next 35 years working out of the Andalusia Post Office.

Willie retired in 2005. He enjoys carpentry work and has built cabinets for friends and family. Willie serves on the City of Andalusia Zoning Board and is Chairman of the City Housing Board.  He and Emma have three children, Willie III, Marshall and Traci. They have four grandchildren and one great-grandchild. Willie and Emma are Members of First Baptist Church, Whatley Street in Andalusia.

Willie III spent 26 years in the U.S. Army, including two tours in Iraq. He retired as a Colonel.

Maybe we can write his story sometime soon.

Author’s note: I have known Willie for more than 40 years, as a friend and an outstanding Postman. I’ve always wanted to write about his service with the Marine Corps in Vietnam and it has been a special honor to do so. 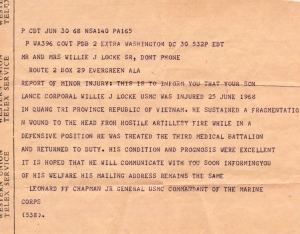 Telegram sent to Willie Locke’s parents after his second combat wound on June 25, 1968.

[Photo: Courtesy of the Locke family]