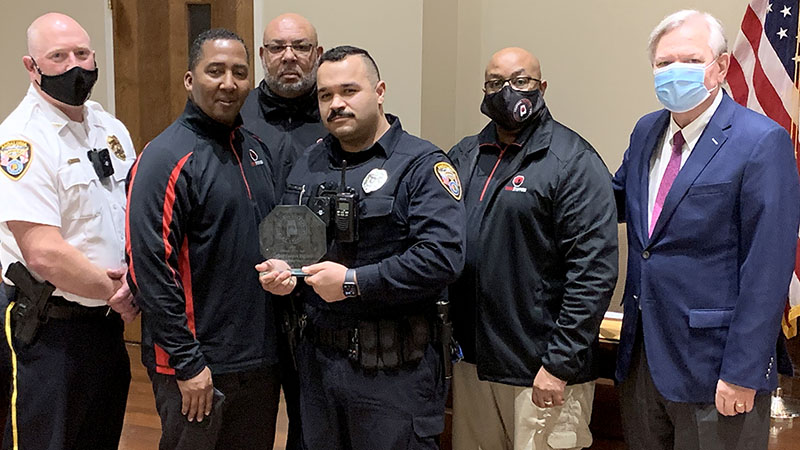 A member of the Andalusia Police Department is the recipient of the Crimestoppers’ Officer of the Year in Andalusia for his efforts in saving a newborn baby during Hurricane Sally. He was presented the award during Tuesday’s meeting of the Andalusia City Council.

Officer Camron Ragland was on patrol in mid-September when he responded to an emergency call. Upon arriving he found that a woman had given birth at her home and the child, a baby girl, was unresponsive. Ragland performed CPR on the baby and brought her back to life before paramedics arrived.

Following the incident, Ragland visited the mother and baby in the hospital where both were said to be in good health.

“We appreciate Officer Ragland’s fine work and the quick action he took. He did what needed to be done,” said Andalusia Police Chief Paul Hudson.

Ragland has been a police officer for three years, serving with the APD for one year. He was recognized in October by the City of Andalusia with a commendation for his life-saving actions.

“Our police officers across the nation for a number of years have gotten a bad rap. What we have here tonight is different from most of the cases we hear about police officer. This is an officer shining a bright blue light in our community by saving a life,” said Councilman Terry Powell.