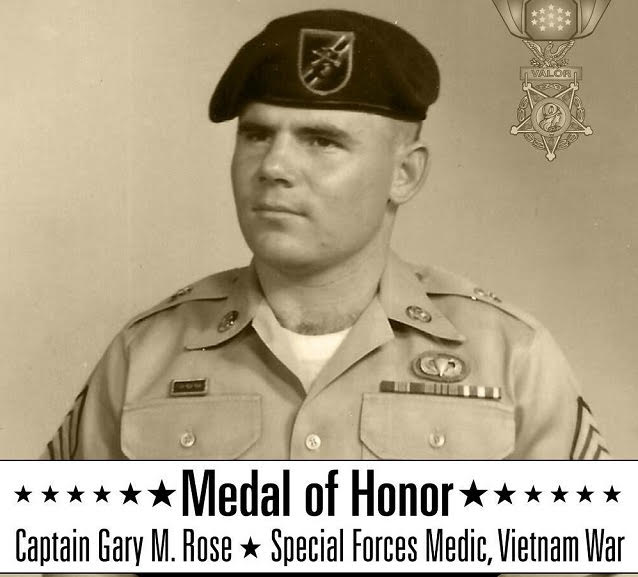 “You get on a helicopter and you fly for 45 minutes, an hour west – when you know by helicopter the border’s only five minutes away – you know you’re in Laos.”

Those words spoken by Army Captain Gary Michael “Mike” Rose set the stage for his part in Operation Tailwind, a four-day U.S. Army Special Forces operation into Laos in support of the Royal Lao Army. The details of this operation remained secret for the next 28 years. Rose was recommended for the Medal of Honor for his actions during the four-day battle. Because of the classified nature of the mission, details backing up his actions were withheld and he was awarded the Distinguished Service Cross instead. It would be 47 years before, then Captain Rose, a resident of Huntsville, Alabama, would be awarded the Medal of Honor.

Gary Michael Rose was born October 17, 1947 in Watertown, New York. His family later moved to Los Angeles. Rose graduated from James Monroe High School in Northridge in 1965. He enlisted in the Army and attended basic training at Fort Ord, California. From there, he received Advanced Infantry training at Fort Gordon, Georgia. Because of his high aptitude scores, he was sent to the Army Airborne School at Fort Benning, Georgia. After earning his Army Parachutist Badge, he entered Army Special Forces training at Fort Bragg, North Carolina. Upon graduation, he was assigned to the 7th Special Forces Group [Airborne] as a medic. Upon reenlistment in 1969, Rose joined the 46th Special Forces Company in Lopburi, Thailand. He was responsible for training Thai soldiers and border police medics.

Rose requested transfer to South Vietnam in April 1970 and was assigned to the Military Assistance Command, Vietnam – Studies and Observation Group [SOG]. His station in South Vietnam was the Forward Operating Base II at Kontum where he treated wounded soldiers and local civilians. His work at the dispensary did not involve combat but that would change in June.

Rose’s first combat mission resulted in a Purple Heart and the awarding of the Bronze Star. His next combat mission was in September when he was part of a force inserted into Laos. On that mission, Sergeant Rose was responsible for the medical care of 15 other Americans and 120 Montagnards, the indigenous people from Vietnam’s Central Highlands.

During the latter part of 1970, the CIA had been conducting Operation Gauntlet in Laos using Royal Lao Army troops. The operation’s goal was to interdict the North Vietnamese Army’s supply operation that used the Ho Chi Minh trail through Laos. By September, things were going badly for the Laotian troops, so the CIA called in help from U.S. Special Forces. On September 11, Sergeant Rose and his group were brought in by helicopter to create a diversion that would relieve some of the pressure on the troops under fire.

The four-day mission into Laos began on September 11. Sgt. Rose, along with 15 American soldiers and 120 Montagnards were dropped deep into enemy territory by Marine helicopters. The landing zone was in a cleared area which came under enemy fire the moment they landed. Rose and the entire force rushed to the jungle perimeter for cover. One soldier was shot and trapped outside the defensive area. Sgt. Rose raced to the wounded man, firing his weapon as he went. He shielded the man while treating the wounds, then carried him to safety, still firing his weapon. Similar scenes were repeated throughout the first day and night. As the casualties mounted, Rose helped dig foxholes for the wounded, all the while treating their wounds and offering encouragement. Rose’s commanding officer, Lt. Col. Eugene McCarley, said of the medic’s heroic action, “The level of gallantry and disregard for his own safety that he showed – I’ve rarely seen anything like it.”

On the second day, an enemy RPG [rocket propelled grenade] exploded near the command post, wounding Rose in the foot. “I got a hole blown through my foot about the size of my thumb,” Rose described. He was hobbled by the wound but continued treating the wounded and moving them to safety. Rose explained, “It was my job. I was responsible for the health and welfare, I guess, of the 135 men that were with me. As they went down, I went to their aid. That’s what I was supposed to do.”

By day three, the men with Rose had destroyed an enemy base camp but found themselves surrounded by 500 North Vietnamese soldiers. By this time, they needed to evacuate their increasing numbers of wounded, so a medevac helicopter was called in. Sgt. Rose helped rig bamboo litters for the severely wounded and helped carry them to the hovering helicopter. However, the enemy fire became so intense that the pilot was forced to abort the mission.

By day four, with food and ammunition running low and the enemy’s mortar fire increasingly intense, extraction helicopters were ordered in. Even as the mortars fell around him, Sgt. Rose helped retrieve the dead and wounded and load them on the helicopters. Finally, he boarded the chopper and left. As they were lifting off, a Marine door gunner was shot through the neck. Rose quickly came to his aid and stopped the flow of blood. Rose would say later that he couldn’t believe the Marine survived, “He’d gotten hit in the throat. I can tell you this much, God decided he wasn’t going to die that day.” Shortly after that, the helicopter’s engine was hit, causing it to crash near a river bank. Rose and the wounded Marine were thrown clear. Rose crawled back to the wreckage, pulled several men out and treated their wounds once they were safely away from the crash site. It wasn’t long before another helicopter arrived and loaded Rose and the other men and carried them back to their base. Sgt. Rose was credited with saving the lives of 60-70 men over the four-day battle in Laos. All 16 American soldiers returned and would be awarded 24 Purple Hearts. All but three of the Montagnards returned.

Sgt. Mike Rose would be awarded the Distinguished Service Cross.

Rose gave all the credit to the helicopter crews, especially the fourth helicopter that had extracted 35 men from the site, “I will tell you this much: if it was not for those Air Force pilots and the Marine Corps Cobra pilots – they would return to base, refuel and come back out; they didn’t get any more sleep than we did – we would not have made it. We owe our lives to those crews.”

After Sgt. Rose’s Vietnam service, he returned to the states and attended OCS [Officer Candidate School]. He married his wife, Margaret in 1971. He had various assignments within the Army and graduated from Cameron University in Lawton, Oklahoma in 1977. He retired from the Army in 1987 with the rank of Captain. His awards at the time included the Distinguished Service Cross, the Bronze Star with one Oak Leaf Cluster and “V” device, the Purple Heart with two Oak Leaf Clusters, the Vietnamese Cross of Gallantry Unit Citation, the Presidential Unit Citation [MAC SOG], along with many others. Rose went back to college and received his Master of Arts degree in Communications from the University of Oklahoma in 1989. Captain Rose worked in the manufacturing industry, including the Raytheon Corporation, writing operating manuals as well as user and maintenance manuals. He left Raytheon in 2003 and moved to Huntsville, Alabama in 2005. Rose and his wife Margaret still reside in Huntsville. They have three children and two grandchildren. He has worked closely with the Knights of Columbus and other charities.

More than 47 years after Sgt. Mike Rose’s heroic actions in Laos, on October 23, 2017, President Donald J. Trump. Awarded him the Medal of Honor. After the ceremony, Captain Rose said, “This award, which I consider a collective medal, is for all of the men, to include the Air Force and the Marines who helped us. This is our medal. We all earned it. And to a great extent, it is for all the men who fought for those seven years in MACSOG, and even further than that, for all the Special Forces who fought and died in that war.”

When interviewed later by a reporter, Rose was asked if he thought God’s hands were evident in his survival. He replied, “It’s your right in this country not to believe in God…..but I don’t see how anybody couldn’t believe in God if you were with us on that day. When I think about those four days, I don’t see how you could survive something like that without Somebody deciding it was not your time to go.” Captain Rose readily acknowledged his faith which he says was embedded in his head from his early childhood. He also gives much credit to his wife for their faith together. Rose is not just a military hero but has that combination of courage and faith that is found among America’s greatest military heroes. Our country is blessed to have men like Captain Mike Rose serve in its armed forces..

Author’s note: Some 30 years after Operation Tailwind, CNN and Time Magazine developed a joint investigative report that was published in June 1998.The report, which was televised and narrated by well-known war reporter, James Arnett, claimed that during Operation Tailwind, U.S. air support had used Sarin gas on its opponents and had committed other war crimes. After an outcry by some of those who had participated in the operation, CNN and the Pentagon conducted a joint investigation which discredited the report. CNN and Time Magazine were forced to retract the report and its producers were fired. Arnett resigned also. The resulting publicity from the controversy forced the Pentagon to declassify Operation Tailwind, thereby bringing to light, the heroic actions by Sgt. Mike Rose. 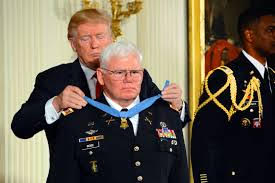