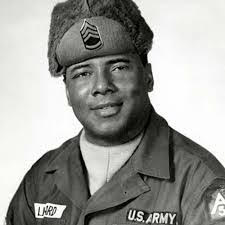 We have no way of knowing the final thoughts of Platoon Sergeant Mathew Leonard as he sat propped against a tree for support, emptying his gun’s magazine at the surrounding enemy. Leonard had taken charge of the platoon when his commander was injured in a fire-fight near Suoi Da, Vietnam. Sergeant Mathew Leonard’s heroic actions on February 28, 1967, would cost him his life and earn him the Medal of Honor.

Mathew Leonard was born November 26, 1929 in Eutaw, Greene County, Alabama. Mathew met his future wife, Lois, at Avondale School. She said there were two Avondale Schools, one for white students and one for blacks. Lois remembered Leonard walking the halls at school in his Boy Scout uniform. Leonard later attended Ullman High School and worked part-time at a drugstore for $15 a week. He dropped out of school in 1947 after completing the 11th grade and joined the Army. After he enlisted in the Army, Mathew and Lois were married. They would have five children.

Mathew’s first battle tour was in Korea and he retuned home safely. After that, Mathew was assigned to Germany and Lois accompanied him there. He made Sergeant there but lost a stripe when he got into a fight with a soldier who called him the n-word. After returning to the States, Mathew was assigned to Fort Leonard Wood, Missouri. His duties there involved training young men who were on their way to Vietnam. He told Lois not to spoil their boys because he couldn’t turn mama’s boys into soldiers who would make it home.

Mathew Leonard made his mind up to volunteer for Vietnam. He told Lois, “They are killing them like flies and I can help.” Lois told him, “You’re crazy. You ought not to do it.” But Mathew had made up his mind. He couldn’t bear the thought of young soldiers, barely older than his two sons, dying in Vietnam. Lois always knew where she stood, “The Army was his first wife. I was his second.”

It seemed to some of Mathew’s friends that he knew that decision meant he would not return home. Mathew sensed that he would not make it back. He told Lois, “I have to die in Vietnam.”

He began his tour on August 31, 1966. He was now a Sergeant First Class. He was assigned to B Company, 1st Battalion, 16th Infantry Regiment, 1st Infantry Division, as a Light Weapons Specialist.

In February 1967, B Company and Leonard were part of Operation Junction City.  On February 28, his platoon was encamped near Suoi Da in Tay Ninh province when they were attacked by a large North Vietnamese contingent. With his commander wounded in the first assault, Leonard rallied the platoon to throw back the enemy troops. During a brief pause in the battle, Leonard organized a defensive perimeter and redistributed ammunition to his men. He constantly encouraged them as he checked the perimeter. Upon noticing a wounded man outside the perimeter, Leonard made his way to the soldier and dragged him to safety. Before they could reach their defensive line, Leonard’s left hand was shattered by a sniper’s bullet. He refused medical attention and rallied his men in the face of increasing enemy fire. He constantly moved from position to position, directing fire as the enemy began a new assault. The North Vietnamese soldiers finally were able to place a machine gun so that it could sweep Leonard’s entire defensive perimeter. To make matters worse, the platoon’s only machine gun jammed. Leonard quickly crawled to the machine gun and was helping to clear it when their position came under heavy fire, wounding the entire crew. Leonard rose up and charged the enemy machine gun. He destroyed the entire enemy machine gun crew but was wounded several times. Leonard was finally able to crawl to a tree and prop himself up. From there, he continued to fire on the enemy soldiers until he succumbed to his wounds.

Sergeant Leonard’s courageous actions, in the face of a superior enemy force, inspired his platoon and bought them time until reinforcements arrived. Many lives were saved by Leonard’s heroism but Lois and the children were devastated by his death. When the two soldiers came to tell of Mathew’s death, she said, “I heard them but I was asleep or in a trance. I heard them but it was like I wasn’t there. I like to lost my mind, but my children were my life so I had to pray a lot.” Sergeant Leonard was buried at Fort Mitchell National Cemetery, Fort Mitchell, Russell County, Alabama.

A year after Mathew’s death, Lois got another visit from a soldier. This time she was told that her husband had been awarded the Medal of Honor. On December 19, 1968, Lois and the family were flown to Washington, D.C. where President Lyndon B. Johnson presented them the Medal of Honor.

In addition to the Medal of Honor, Sergeant Leonard was awarded the Republic of Korea Presidential Citation, the Purple Heart, Army Presidential Unit Citation, Vietnam Gallantry Cross and several commendations and awards.