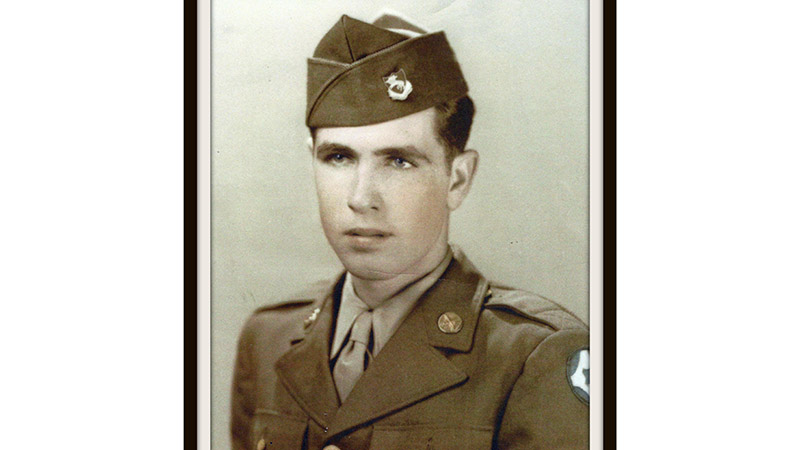 Mr. Charles Leonard Saunders was a great American soldier and member of The Greatest Generation. He died at his home in Troy, Alabama, on March 18, 2021. Like so many others of his generation who fought in WW II, Charles was modest and humble. He was blessed with a special memory and was able to recall events from his wartime experiences in great detail. Some of those memories were recorded in a 2015 interview, conducted by Robert Evers, John Vick and Jim Lawrence. Parts of that interview were included in a DVD produced by Robert Evers for the Covington County Veterans committee. That 30-minute video is available in Blue-Ray format from Covington Veterans Foundation; PO Box 52; Andalusia, AL 36420. The cost is $30, postage included. 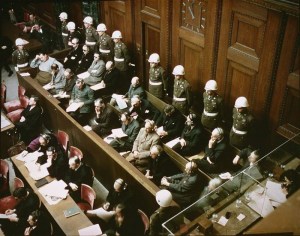 Following the end of the war, Charles was selected as one of the guards for the Nuremberg trials.

At the conclusion of the interview in 2015, our group took Mr. Saunders to lunch at his favorite dining place in Troy, Sisters’ Restaurant. Lunch was delayed more than 15 minutes while every waitress in the restaurant came over to give Charles a hug.

Charles Saunders was born in Opp, Alabama, on June 14, 1925. His parents were Lawrence L. and Lena Mae Saunders. He graduated from Opp High School in 1943 and joined the Army. After completing Army Infantry Training at Fort Jackson, South Carolina, Charles was assigned to the Military Police. He volunteered for an elite guard unit with the MPs which required a high school diploma. That unit would be sent to the European theater in 1944.

Saunders was assigned to the 795th MP Battalion which was a part of the 29th Division. They went ashore at Normandy on June 12, 1944, just six days after D Day. As the Allies fought on into France, Belgium and Germany, the MPs followed. As a member of an elite unit of MPs, Charles often was assigned to guard Lt. Gen. William H. Stimpson, commanding officer of the 9th Army. When Paris was freed from German occupation, Charles was part of the unit that escorted French Gen. Charles DeGaulle into the city. Not all of Saunders’ duties were as pleasant as those.

The MPs were often given the task of burying the dead, both Allied and German. During the German offensive in Belgium in late 1944 [Battle of the Bulge], Charles’ unit was sent by train, northeast of Bastogne, to set up checkpoints at key roads. The Germans had infiltrated Allied lines, dressed in American uniforms. In some cases, they even posed as MPs who would give false directions to Allied vehicles. When the German infiltrators were caught by the U.S. MPs, they were captured, tried as spies and executed the next day. Charles Saunders recalled using leather straps to tie the hands of the prisoners before they were executed.

Following the end of the war, Charles was selected as one of the guards for the Nuremberg trials. One of the prisoners that he guarded was former head of the German Luftwaffe, Herman Goering. Unfortunately, Goering escaped justice by taking a cyanide pill before his sentence. Charles also guarded Albert Speer, former head of Germany’s Armaments and War Production.

The author enjoyed Mr. Saunders’ friendship and listening to his recollections from the war. In a phone call in 2020, he related a story that I believe says more about the man than the war.

“Our squad was near the Belgian town of St. Vith when nightfall came. We decided to bivouac near a small country church. We pitched our tents in the cemetery because we thought the rock wall surrounding the cemetery might give us some protection. Sometime during the night, I was awakened by a gunshot. A German soldier had climbed up on the wall and taken a shot at us. My good friend, Ralph Ertle and I took off after the German. We were able to chase him down and force him to the ground. I told Ertle, ‘You know Eisenhower said not to take any prisoners, so you shoot him!’ General Eisenhower, the Supreme Allied Commander in Europe has supposedly issued the order after the Nazis had massacred some Allied Prisoners-of War. ‘ Ertle replied, ‘No, you shoot him!’ I bent over and searched the German for any papers he might have and found his wallet. Inside, I found a picture of his wife and two kids. I told Ertle, ‘Let’s turn him in to Headquarters.’”

[Some details of Charles Saunders’ service during WW II were taken from a book by my friend, USAF Ret. Lt. Col. Jim Lawrence’s, American Veterans – Their Stories of Service and Valor]