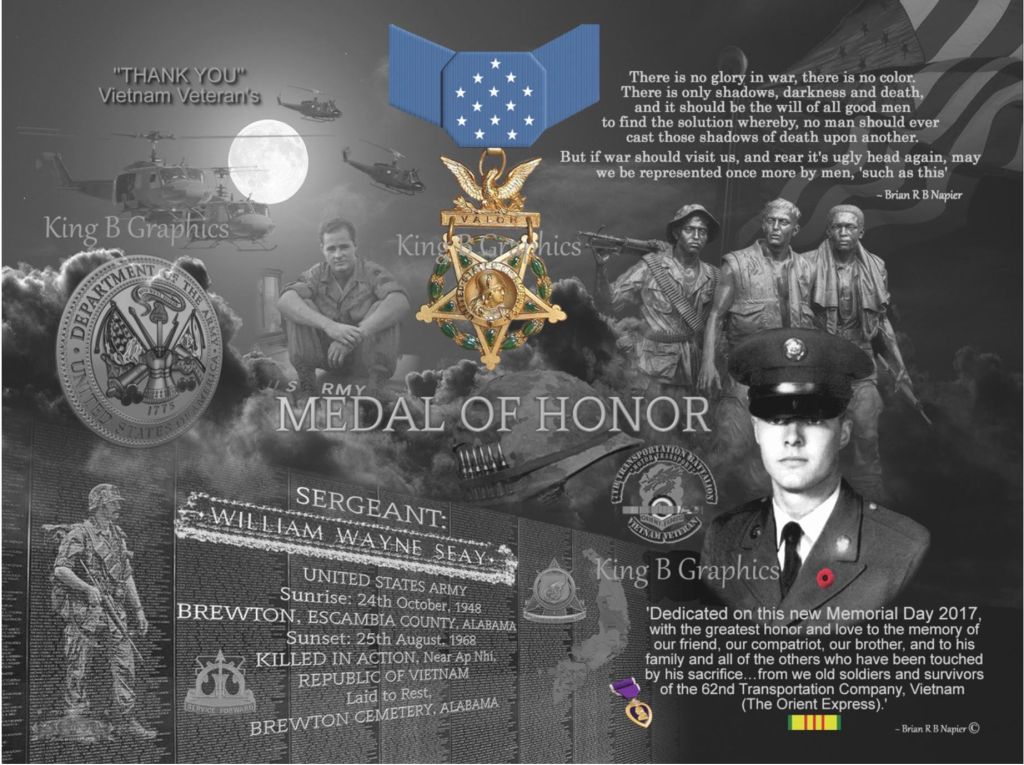 On this week of Vietnam Veterans Memorial Day, we salute all those who served and remember the fallen. This is the last of three articles honoring one of the fallen, Sergeant William W. “Billy” Seay.

In honoring those combat veterans who gave their lives serving our country, we may in some small way, repay that debt by telling their story. May they never be forgotten.

In concluding the story of Medal of Honor recipient, Sergeant Billy Seay, the author would like to thank the people who helped bring his story full-circle. His sister Sarah Lee and her daughter, Linda Darwish, were gracious in helping contact some of Billy’s friends. In spite of stirring sad memories from the past, they told Billy’s family story. Vietnam veterans Randy Richmond and Kirt Fordyce were able to provide information about Billy’s time in Vietnam, particularly during the time of the ambush and their quest to contact the family, so many years later.

Words cannot convey the graphic violence that confronted those American soldiers that awful day, a half-century ago. Outnumbered many times over, defending their convoy on terrain chosen by the enemy, taking what little cover was available behind explosives-laden trucks – the men of the 62nd Transportation Company – particularly Sergeant William W. Seay – fought with a courageous ferocity and determination until help arrived. Their deeds live on in the memories of those who survived and deserve our most fervent efforts to preserve their stories.

Nineteen-year-old Billy Seay died tragically in an unpopular war that would take the lives of more than 58,000 of his comrades. He died from an enemy’s bullet but not before having given a good accounting of himself. His gallant, extraordinary acts of courage did not go unnoticed that dark day at Ap Nhi in 1968. President Richard M. Nixon presented the Medal of Honor, posthumously to the family of Billy Seay at the White House on April 7, 1970.

Eleven days after his death in Vietnam, Billy Seay was returned home to his family in Pensacola. His sister Sarah remembered, “The Army couldn’t give us many details about what happened to Billy. For some reason, they didn’t want me to meet Billy’s plane when he came home. I had always seen him when he came home or left and I meant to do it that time. So, with my husband on one side and my sister-in-law on the other, I was there to meet Billy when he came home.” Everything was a blur for Sarah for the next few days. She stayed by his side during the day and a half before the funeral service. A uniformed soldier and some of Sarah’s friends stayed with her.

After the funeral, the procession made its way from Pensacola to the Weaver Cemetery in Brewton, Alabama, where he was buried with full military honors. For a year after the burial, a soldier stood guard at Billy’s grave. Sarah was told that they were volunteers from Fort Rucker, Alabama.

Sergeant Billy Seay has been honored many times in addition to the Medal of Honor. Several officers’ barracks have been named for him, along with five military parade fields, two tugboats, and a training center. The Army Reserve Center in Mobile, Alabama is named for Seay. An auditorium at the U.S. Transportation Command at Scott Air Force Base, Illinois, was also named for Sergeant Seay

On June 20, 1998, a 950-foot long Navy Cargo ship, the USNS Seay [T-AKR-302], built at Avondale Shipyard in New Orleans was named for Sergeant Seay. The ship is a Bob Hope class roll on, roll off vehicle cargo ship. It is operated by the Navy Military Sealift Command and can carry an entire Marine Corps expeditionary force.

Speaking of Seay at the christening, Air Force General Walter Kross, commander U.S Transportation Command said, “He didn’t just defend. As enemy fire intensified, so did his response. Seay picked off a sniper. Then as grenades rained down on him and his buddies, he repeatedly rose from cover and braving enemy fire, pitched the grenades back killing several of the enemy. Painfully wounded, he continued to return fire….Without thought for his own safety, in severe pain with only his left hand usable, he stood and took them under fire, killing three of them, until he fell, mortally wounded from a sniper’s bullet.”

Sergeant Seay was further honored by a joint resolution of the Alabama Legislature in 2020. On December 5, 2020, a ceremony was held dedicating a portion of U.S. Highway 31 between Flomaton and Brewton, The Sergeant William W. Seay Memorial Highway in honor of Seay.

Through the years, Billy’s family grieved in their own way. A group of Billy’s fellow soldiers from that Ap Nhi convoy also grieved. Not until 2008 would his fellow soldiers learn that he had been awarded the Medal of Honor. Still, there had been no connection between Billy’s family and his soldier-friends from 1968. That changed in 2016 when Randy Richmond first heard Billy’s name mentioned by a few members of a small “chat group” who had served with Billy in Vietnam.

Randy Richmond was a Specialist-five in the Army and had been stationed at Long Binh, Vietnam with the 402nd Transportation Company during the war. Randy’s passion is to unite buddies that fought in that war. Randy and some friends who served with Billy in Vietnam belong to a chat group that meets twice weekly.

They talk about everything from the war to the weather and their grandkids. They had long wanted to connect with members of Seay’s family but had never been able to contact any of them. Randy Richmond volunteered to help in their search. He spent many hours scanning the internet and leaving messages on sites such as “Find a Grave.” Randy finally received a note from Billy Seay’s niece, Lynda Darwish. Through that connection, Kirt Fordyce, a fellow soldier and friend of Billy told the family of their plans to come to Alabama to honor him on Memorial Day 2017. The family made plans to meet Billy’s friends at Atmore, Alabama, on that day.

At that meeting were three of Billy’s friends from the convoy that day: Joe Tuttle from Michigan, Mike Gum from Ohio and Kirt Fordyce from Massachusetts. They had made a very special plaque honoring Billy and they presented it to his family. All of them were able to honor Billy at his gravesite at Weaver Cemetery in Brewton on that Memorial Day.

Billy’s sister Sarah said of that meeting, “We were thankful to Randy Richmond for bringing us all together. We learned a lot of what the Army had kept silent from us. After all these years, some of the mystery was cleared up for us. Those brothers of Billy’s would answer any and all of our questions.”

Kirt Fordyce still remembers his friend, “August 25, 1968 in Vietnam was the day my comrade William Seay heroically gave his life, protecting his brothers in the 62nd Transportation Company in a horrific ambush on our supply convoy….Because of his amazing courage that day, many more of his comrades were able to stay in the fight when we were greatly outnumbered.” It took almost 50 years but Billy’s friends were finally able to tell his family how much his friendship had meant and that he had never been forgotten.

In 2019, Kirt Fordyce learned that the USNS Seay was in drydock at the Boston Naval Shipyard. He contacted the ship’s captain and arranged to visit the next day. He was given a tour of the ship and he presented his plaque [honoring Billy] to the ship for display. Kirt left with several hats and shirts with the ship’s name. Kirt said, “What a great and memorable day with super people.” Billy Seay’s heroism in Vietnam lives on in the hearts of the men who man the ship named for him. 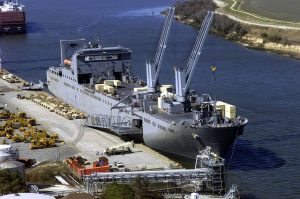