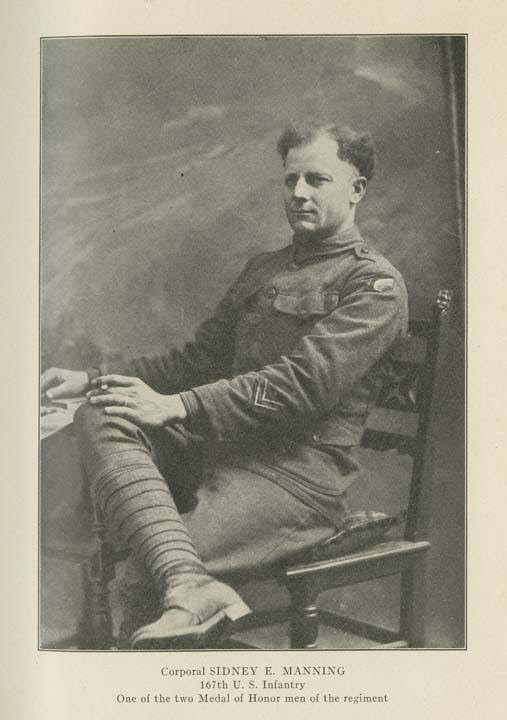 Only two native Alabamians were awarded the Medal of Honor during WW I. They were Army Corporal Sydney E. Manning and Navy Gunners Mate First Class Osmond Kelly Ingram.

This article will tell the story of Corporal Manning.

Sydney Ernest Manning was born on July 17, 1892 in Butler County, Alabama. His parents were Barney Austin and Sarah Elizabeth Vickery Manning. The family moved to Flomaton, Escambia County, Alabama early in Sydney’s childhood. When he registered for the draft in 1917, he was listed as a farmer and married to Mamie Knowles Manning with two children. One child died in infancy while Manning was serving overseas.

Manning was drafted and assigned to the Fourth Alabama Infantry. In August 1917, the infantry unit was federalized as the U.S. 167th Infantry Regiment. The 167th was part of the newly created 42nd “Rainbow Division,” which was composed of National Guardsmen from 26 states and the District of Columbia. Colonel Douglas MacArthur, commander of the division, remarked that their component units stretched across the country “like a rainbow,” so the name stuck. The 42nd Division arrived in France in February 1918.

The colorful history of the 167th Infantry Regiment of the 42nd Rainbow Division is covered in depth in the acclaimed book written by Nimrod T. Frazer, “Send the Alabamians.” The exploits of Corporal Sydney Manning are but a part of the heroic history of the 167th Regiment.

By July 1918, the 167th Regiment had proven itself and was a hardened, battle-tested unit. Corporal Manning was a member of Company G, 2nd Battalion and would be at the center of the fierce fight in which he earned the Medal of Honor.

By the middle of July, the German Army’s offensive had steadily progressed into the Chateau-Thierry region of France and seemed on the verge of taking Paris. To try and halt the German advance, the Allied forces decided to counter-attack in the Aisne-Marne region. Along with units of the French Army, the AEF [American Expeditionary Force] launched an offensive in July. in an area known as La Croix Rouge Farm. The 167th was successful in routing the Germans in fierce hand-to-hand fighting that left 162 Americans dead.

On the morning of July 28, the 2nd Battalion of the 167th Regiment was ordered to cross the Onrcq River and seize a foothold on the northern heights. During the crossing the battalion was under fire from a furious artillery barrage and concentrated machine gun emplacements atop the heights above the river. Around mid-morning, Corporal Manning’s platoon commander was killed and his platoon sergeant severely wounded, leaving him in charge of the platoon. With his automatic rifle squad and the platoon, Manning, who was already wounded, led the 35 men still able to fight, over the crest of a hill directly into the enemy stronghold. Although he was repeatedly wounded in the assault, Corporal Manning led the way against the enemy which was entrenched and protected by barbed wire. By the time they had taken the foothold, all but seven men of the original 35 had been killed or wounded.

While he held the ground that had been taken, Corporal Manning directed his men back to the rest of their company who were trying to catch up. With the enemy less than 50 yards away, Manning held his ground until the position had been consolidated. He had been wounded nine times during the fight.

In a letter to the commanding officer of the 42th Infantry Division, the commander of Company G, Lieutenant Richard B. Kelly Jr. recommended Manning for the Medal of Honor.

General John J. Pershing presented the Medal of Honor to Corporal Manning in March 1919, in Remagen, Germany. The 42nd Division was stationed there as part of the Army of Occupation. Manning was also awarded the Distinguished Service Cross, the Purple Heart, the French Croix de Guerre [Cross of War], Medaille Militaire [Military Medal] of France, the Croce al Merito di Guerra [War Merit Cross] from Italy and the Medalja za Hrabrost [Medal for Bravery] from Montenegro.

Sydney Manning returned to Flomaton later that year. He reportedly avoided a celebration held in his honor by disembarking his train early.

At the government’s request, Manning attended the inaugural Veterans Day wreath laying ceremony at the Tomb of the Unknown Soldier in 1921. Nearly destitute, Manning finally received help from the Alabama legislature in 1935 when they voted to give him financial support to buy a farm and equipment.

More about Manning is contained in an article written by WPA author Annie L. Bowman in 1940. She wrote that, “Corporal Manning lives four miles from Flomaton across big Escambia River on a farm of 40 acres…..He receives $50 a month pension. Although only 45 years old, he lives quietly on the farm with his wife Mamie Knowles….He has never recovered from wounds received during the war and suffers continually.”

Sydney E. Manning died on December 15, 1960, in a Veterans Administration Hospital in Montgomery, Alabama. He was buried at Little Escambia Cemetery in Flomaton. He was survived by his wife, Mamie Knowles Manning, and a son, Sydney H. Manning.

In 1976, the city of Flomaton erected a monument in Lion’s Park, dedicated to Corporal Sydney E. Manning. It was later moved to the Flomaton Welcome Center.

In December 2020 the Alabama legislature passed a joint resolution naming the portion of U.S.31, between Atmore and Flomaton, The Sydney E. Manning Memorial Highway.

Postscript: In remembering all the heroes who fought and died in “The Great War,” General

John J. “Blackjack” Pershing gave this omniscient warning to the world, “We never really let the Germans know who won the war. They are being told that their army was stabbed in the back, betrayed, that their army had not been defeated. The Germans never believed they were beaten. It will have to be done all over again….” His words would ring true some 20 years later when Germany invaded Poland, beginning the war Pershing had predicted. 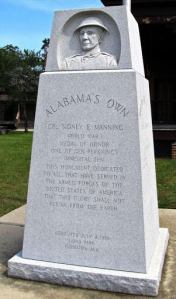 at the Flomaton, Alabama Welcome Center.

Ambush at Ap Nhi – The Heroism of Sergeant…