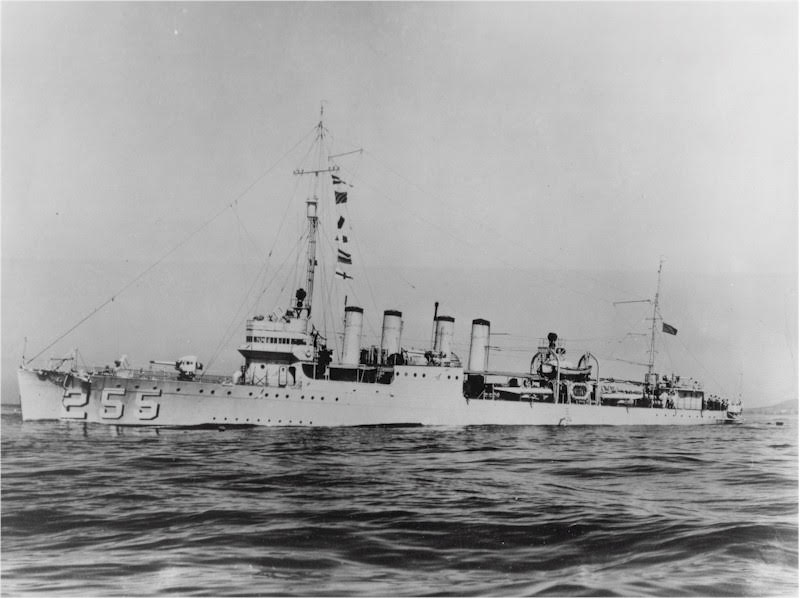 USS Osmond Ingram [DD-255], named for the WW I recipient of the Medal of Honor. [Photo: U.S. Navy History and Heritage Command]

The first U.S. Navy enlisted man to die in WW I was Gunners Mate First Class [GM1] Osmond Kelly Ingram of Pratt City, Alabama. The 30-year-old seaman was serving aboard the Navy destroyer USS Cassin [DD-43] when it was torpedoed by a German Submarine U-61 on October 15, 1917. Ingram would be awarded the Medal of Honor for his heroic actions that day.

Osmond Kelly Ingram was born on August 7, 1887, in Oneonta, Blount County, Alabama, to Naomi [Bettie] and Robert Ingram. His father was a Methodist Episcopal minister and Confederate Army veteran. The family moved to Pratt City, Jefferson County, Alabama sometime before Robert’s death in 1897.

Kelly, as he was called, decided to join the Navy after he turned 16 years old in 1903. With his mother’s consent, he enlisted in the U.S. Navy on November 24, 1903. After serving five years in the Navy, he left to join the Pratt City Fire Department. He worked as a firefighter for five years before deciding to reenlist in the Navy. He was assigned to the USS Cassin as a Gunners Mate in the Gunnery Department.

Ingram was still aboard the Cassin when the United States entered the war on April 6, 1917. His ship was part of the Navy fleet sent to protect American merchant ships bringing goods to France and England.

On the morning of October 15, 1917, Cassin was patrolling off the coast of Ireland when she came in contact with the German submarine U-61, which launched a torpedo. Aboard the destroyer, Ingram was the first person to spot the torpedo which was headed toward the ship’s stern. Realizing that the depth charges were stored on the stern, Ingram raced to the rear of the ship and started releasing them in an effort lessen the impact of the explosion. He had released many of the depth charges before the torpedo impact. The resulting explosion blew Ingram overboard and severely damaged Cassin’s rudder. Ingram’s death was the only casualty and the destroyer was able to make its way back into port for repairs. His body was never recovered.

GM1 Osmond Kelly Ingram would be awarded the Medal of Honor posthumously. His mother became the first recipient of funds for dependents of soldiers and sailors after Congress passed the Military and Naval Insurance Act in 1918.

In June 1919, the navy commissioned a destroyer, the USS Osmond Ingram [DD-255] in honor of the Pratt City sailor. It was the first navy ship named for an enlisted sailor. The ship went through a conversion to a troop transport, then back to a destroyer and was one of the ships moored at Pearl Harbor on December 7, 1941.

Ingram was honored by naming the main flagpole and colors area of the Naval training Center, Sand Diego, California, Ingram Plaza. In 1932, West End Park in Birmingham was renamed Kelly Ingram Park with a memorial placed on the park grounds. Post 668 of the Veterans of Foreign Wars in Birmingham was also named for Ingram. Ingram’s name is listed on the Wall of the Missing at the American Battle Monuments Commission, Brookwood American Cemetery in Surrey, England.