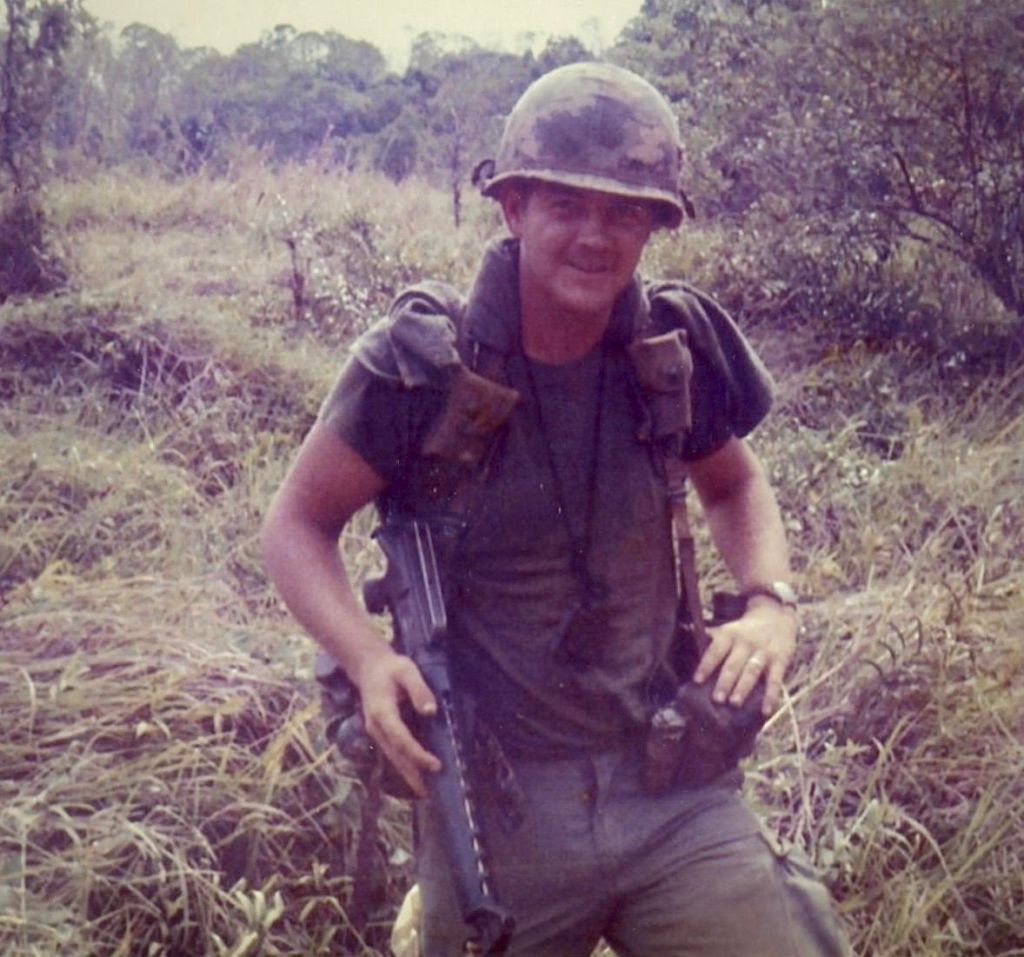 The Air Cavalry concept for the Army began in 1965 when the 1st Cavalry Division [Airmobile] was organized. Their purpose was to provide reconnaissance for large field commands, conduct security operations and to maintain security and control over the people and resources for an assigned area using helicopters. One soldier who took part in the Air Cavalry operations in Vietnam was a former resident of the Red Oak community in Covington County, John W. Kelley.

1st Lt. Kelley was on his third tour in Vietnam, this time as a platoon leader with A Company, 1st Battalion, 12th Cavalry Regiment [1st Air Cavalry Division]. His platoon was conducting a combat assault against a known enemy position. They had barely moved 100 meters inland from the Landing Zone [LZ] when the mine went off. The Viet Cong [VC]had a habit of placing mines in unexpected places. This one was hidden in a termite mound, several feet above ground in order to cause maximum damage. The loud flash and explosion were followed by screams and moans. As soon as the dust cleared, Kelley could see the two men closest to him had been hit. His young Jamaican-born medic’s legs were nearly blown off and his Radio Telephone Operator [RTO] had suffered life-threatening wounds. Both men were within three feet, on either side of Kelley, but he had not been injured. As quickly as he could, Kelley directed his squad leaders to assess the platoon’s injuries and to establish a defensive perimeter. They were already under fire from small arms and Rocket Propelled Grenades [RPGs]. The radio was undamaged so Kelley called in the Medevac helicopter himself. The Dustoff crew [as the UH-1 Huey Medevacs were called] arrived within 15 minutes but the fire-fight lasted another 30 minutes.

John Wilbur Kelley was born August 30, 1945 in Mobile, Alabama. His parents were John J. Kelley and Ruby Bulger Kelley. Four years later, the family moved to the Red Oak community in Covington County. John Wilbur Kelley and his sisters, Rebecca Kelley Maddox, Aurelia Kelley Jones and Ruby Kelley Fleming, grew up in Red Oak in a home their father had built. Their father worked for Waller Construction Company in Andalusia. He also farmed peanuts, cotton and corn and John helped out on the farm when he was not in school. He attended W.S. Harlan Elementary School in Lockhart and Covington County High School in Florala. While in high school, John met Glenda Ann Watford and they became sweethearts and were married during their senior year.

John joined the 900th Engineers with the Alabama National Guard in Florala his junior year in high school. Before graduating in 1964, he quit school and started a job at Dorsey Trailers in Elba. In February 1965, John left Dorsey Trailers to join the Army and was sent to Fort Rucker, Alabama and the Army Aviation school. He was trained as a Crew Chief aboard a UH-1 Huey helicopter. Upon completion of training at Fort Rucker, John was assigned to the Division Artillery Aviation Section of the 25th Infantry Division, Schofield Barracks in Hawaii. In December 1965, he was offered a chance to volunteer for a secret mission. He wasn’t told where the mission would take place but in January 1966, he was part of the 2nd Brigade Task Force that departed for Chu Chi, South Vietnam.

The Task Force consisted of four infantry battalions, two artillery battalions, an engineer battalion and a medical unit. They landed at Chu Chi [pronounced koo-chee], a base some 25 miles northwest of Saigon. It was unknown at the time but Chu Chi was located in the midst of a vast Viet Cong tunnel complex. The troops at Chu Chi were subjected to frequent sniper fire along with rocket and mortar attacks.

In his first tour in Vietnam, Sgt. John Kelley flew as a Scout Observer aboard a Forward Observer helicopter that directed air and artillery strikes. He remembered one particular mission during that first tour. On that day, he was aboard an unarmed Huey that was being ferried from maintenance work at Saigon back to Chu Chi. They received a call on the Emergency Guard frequency asking them to pick up wounded. They would be flying into a battle zone, unarmed except for Kelley’s M-16 rifle and the two pilots’ handguns. They quickly diverted to the location of the firefight which was still underway.

They landed right next to a Medevac Huey while explosions were still going off around them. Just as the Medevac was lifting off, Kelley observed an armored personnel carrier hit a land mine and explode with a force that sent it cartwheeling into the air. With the Medevac gone, three badly wounded soldiers were brought to Kelley’s helicopter. He still remembers the scene as if it were yesterday, “All three of them had burns over 90 percent of their bodies. The smell was horrific and they were in terrible pain. I never felt more helpless because there was no way I could comfort these wounded Brothers. Our flight to the hospital at Chu Chi was only 10 minutes but I was told that all three succumbed to their injuries. It was so heart-breaking and it still haunts me to this day.”

Sgt. Kelley’s second tour in Vietnam was with the 118th Assault Helicopter Company based at Bien Hoa Airbase. As a Flight Platoon Sergeant, he usually flew missions three or four times a week to relieve a Crew Chief. One particular mission on December 17, 1967 stands out in Kelley’s memory, “We were tasked with a mission to fly cover over three downed helicopters, keeping the enemy away with machine gun fire. Two of our gunships had started a firing run on the enemy, hidden in a wood line near the Landing Zone [LZ] when the lead ship was hit by enemy fire. I watched as it crashed landed with its tail boom separated and its main rotor blades flying in all directions. We immediately landed to pick up the downed crew. The Gunner and I got out and raced toward the crashed ship when four figures raised up out of the rice paddy, covered in mud and waving. For a moment we weren’t sure if they were the crew or the enemy. They were our guys and it seemed miraculous that they had only suffered minor injuries. We soon had them aboard and were gone within a couple of minutes but it seemed like an eternity.” Sgt. Kelley and his Gunner were awarded the Air Medal for Valor for this action.

January 31, 1968 is a date Kelley won’t forget – that date was the start of the Tet offensive by North Vietnam. His airbase at Bien Hoa came under a massive ground and rocket attack around midnight. The assault at Bien Hoa was part of a well-coordinated, country-wide attack across South Vietnam. The North Vietnamese hoped the Tet attack would bring about an uprising that would cause the South Vietnamese government to collapse. With a little warning, Sgt. Kelley along with his crew chiefs, gunners and clerks had starting stocking the perimeter fighting positions with extra ammunition. When the rocket attack started, they manned their defensive positions and fought the enemy for the next eight hours. Kelley recalled, “We were receiving heavy fire but we were returning even heavier fire. About three o’clock in the morning, an armored Cavalry Troop arrived and set up about 200 yards to our left. I would have hugged their necks if I could have because they brought tanks, armored personnel carriers and massive firepower. Up until that point, I wasn’t sure if we were going to be able to maintain our defense.”

After his second tour in Vietnam, Kelley was sent to the Army Aviation School at Fort Rucker and was assigned as an instructor in the Huey Door Gunner Branch. While there, he applied for OCS [Officers Candidate School] and was accepted. After graduating from OCS at Fort Benning, Georgia, he was commissioned a Second Lieutenant and assigned back to Fort Rucker with a Long-Range Reconnaissance Company. After a few months, he was sent to Germany and assigned to the 2nd Battalion, 4th Infantry Regiment with the 7th Corps. A year later, he was assigned back to the 1st Air Cavalry Division and started his third tour in Vietnam.

On his third tour from 1971-72, 1st Lieutenant Kelley was Rifle Platoon Leader, 1st Platoon, “A” Company, 1st Battalion, 12th Cavalry Regiment, 1st Air Cavalry Division. After a short orientation at Bien Hoa, the different battalions were assigned to firebases located 10 -20 miles out. Four companies were assigned to each firebase. One company stayed at the base for security and rotated out into the field with the other three. A mission in the field usually lasted 30-40 days and they were resupplied every four days. Their assigned mission was to conduct reconnaissance-in-force patrols daily and ambushes nightly.

Kelley recalled the operations of his platoon, “The majority of our missions consisted of platoon-sized operations in jungle terrain. My infantry platoon averaged about 27 men. The infantrymen were called ‘Grunts’ because they lived like pigs!”

He went on to talk about one engagement when his First Platoon was sent to assist the Third Platoon which was engaged in a firefight. “Our company commander directed me to move out and link up with the other platoon. Moving late in the evening is difficult because of the thick jungle which kept us from preparing good fighting positions, when we linked up with the other platoon. When we reached the other platoon, I coordinated our position with theirs. Around 9 pm, the enemy launched a fresh attack on Third Platoon. An hour later, they began to probe my platoon sector and we repelled their probe with M-16 fire…..They harassed us throughout the night by firing RPGs but my platoon suffered no casualties. The Third Platoon suffered several casualties.” This action preceded the incident in which Kelley’s platoon was struck with the claymore mine hidden in a termite mound. This was Kelley’s third tour in Vietnam. During this last tour, his platoon would lose four men killed in action and another 20 wounded.

Retirement was followed by a two-year stint as JROTC Senior Army Instructor for Wingate High School, Fort Wingate, New Mexico. After that, John joined General Dynamics in 1992, and worked on the Abrams Tank system at Fort Hood, Texas and Saudi Arabia until 2009 when he retired.

Major John W. Kelley lives in Milton, Florida, with his wife, Glenda. They raised a daughter Vicki and three sons – Darren, Jeff and Rob [who is deceased].

Speaking of his 23-year military career, Major Kelley said, “I feel privileged to have fought alongside and led some of our country’s bravest young men. I wish all children could grow up in a community like the Red Oak Church community. I attribute any success I have had to my wonderful family and the folks at Red Oak and my wife, Glenda, who was in charge of our children on my many field training exercises and three tours in Vietnam.”

Author’s note: I only met Major Kelley a few years ago but his father, John J. Kelley, was a dear friend and Maintenance Supervisor with me at Dixon Plywood [1970-78].

[Sources: Wikipedia, history.net. I wish to thank Major Kelley for his interview and help in providing his career information]. 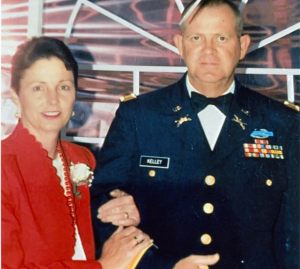