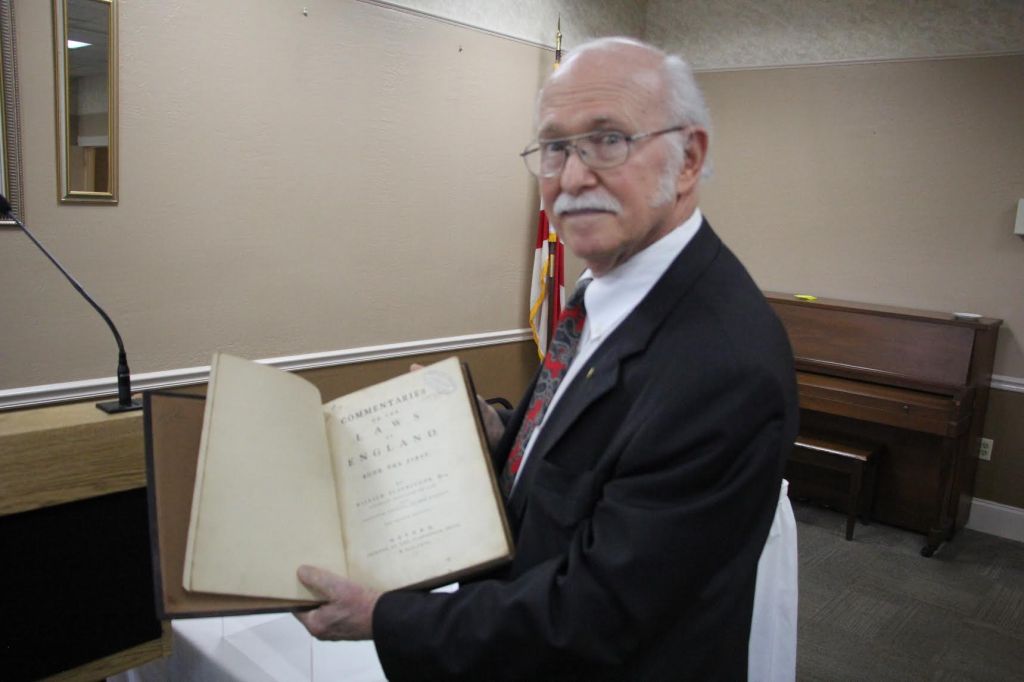 The Andalusia Rotary Club hosted Alabama Chief Justice Tom Parker who shared with the members the story of a set of law books of great historical significance.

Parker purchased the mixed first edition of “Commentaries on the Laws of England” by William Blackstone. It is widely agreed that Blackstone and his commentaries played a big role in the earliest development of laws and government of the United States.

“Research shows that Blackstone was the second most cited thinker in America from 1760-1805, behind (French judge) Montesquieu. This is a legal writer who was having this influence on American politics,” Parker said.

But, the books purchased by the judge have a unique history beyond the significance of the author and its content.

The set features first editions originally published in 1766, 1767, 1768 and 1869. While Parker purchased the set at a New York auction, he didn’t learn until later that the set originated in what is now Alabama with its first owner being Edmund Rush Wegg, the attorney general of British West Florida, an area that encompassed the Florida Panhandle north to what is now Montgomery. Wegg resided on the Eastern Shore of Mobile Bay at what is now known as Battles Wharf. After the Revolutionary War, Wegg joined the colony of British exiles in the Bahamas where he was appointed attorney general.

The second owner of the set was William Wylly, who had fought against the colonials as a captain in the King’s Rangers. He fled his native Georgia after the war after the legislature there indicted him for treason. He became solicitor general in the Bahamas. Wylly eventually converted to Methodism and became a vocal abolitionist.

William Jones, who fought with Washington at Trenton and Princeton before serving in the Continental Navy, was the third owner of the volumes. After the way, Jones opened a shipping firm in Charleston, later returning to his hometown of Philadelphia and was elected to Congress. He was appointed to Secretary of the Navy by President James Madison during the latter half of the War of 1812. He sent his own shipbuilders to build the vessels that Thomas McDonough used to defeat the British on Lake Champlain. After the war, he was selected to serve as president of the Second Bank of the United States.

The fourth owner, whose signature stamp appears inside, is Martin van Buren, the eighth president of the United States.

When Alabama’s Chief Justice purchased the set of books in New York, he brought them back to the area where they were first owned by Wegg on the Eastern Shore over 250 years ago.

“We know the books went to the Bahamas and that they went to New York. Now, they have come back to Alabama. Isn’t it amazing that we can see, depicted in the owners of this set, the currents that were affecting the globe at that time,” Parker said.