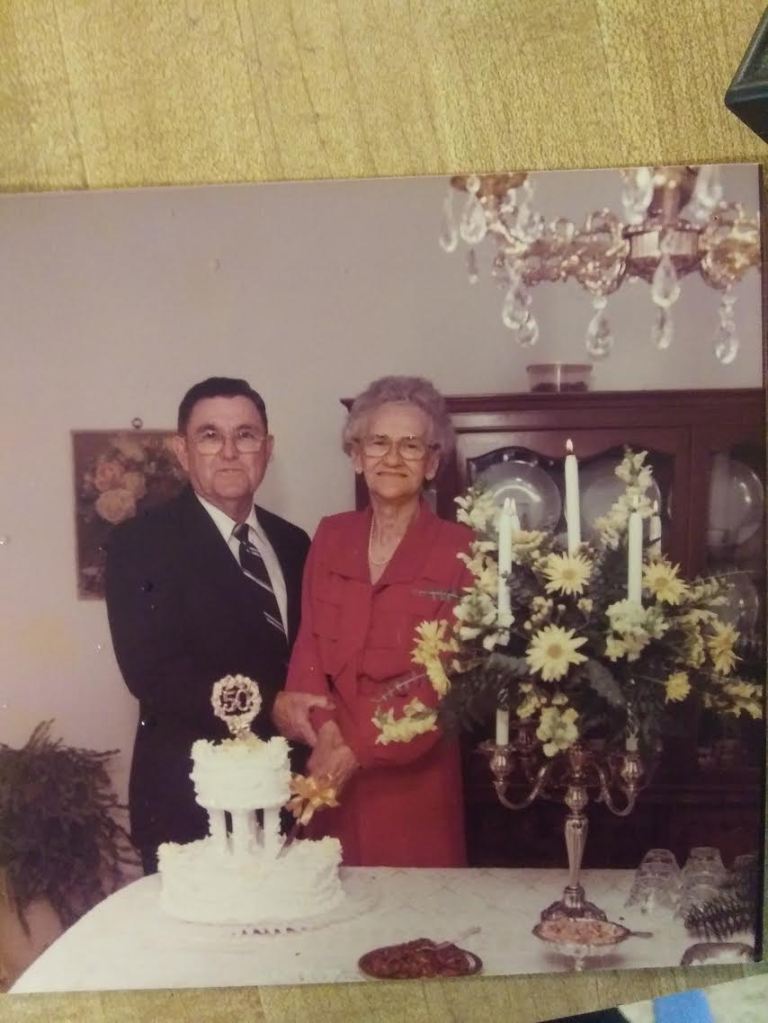 Carrie Edna Cordelia (Thomasson) Moore was the youngest daughter and next to youngest child born to Frank Thomasson and his second wife, Lizzie Ella (Griswold) Nichols. Cordelia was born in 1915 south of Andalusia in the Cedar Grove community on Brooklyn Road. She was reared there in a large family with whom she developed close relationships that lasted a lifetime. As a youth, she attended Adellum School and Cedar Grove Church of Christ along with her siblings. She became a devoted Christian servant and was always a dedicated homemaker.

In 1935, Cordelia was married to James Alfred “Dilly” Moore, son of Clarence Eugene Moore and Maggie Estelle Knowles. They established their home on “Chalk Hill” near Adellum Baptist Church in the house built by Noah Stanford Stokes around 1900. They created a loving and hospitable home in which they reared four children. Dilly supported the family with his work as a well-known plumber. In later years they built a new brick house on their property facing Brooklyn Road.

The oldest child, Dorothy Wynette, was born in 1937 in Andalusia, and the family soon moved to Panama City where her daddy worked in the shipyard for a year or so before returning home. She was graduated from Pleasant Home School in 1955 and married the next year to Will Ronnie Mullen, son of Frank Nicholas Mullen and Edna Lois Bush. She worked as a secretary at Alatex and later, Andala. Ronnie worked in sales and became mngr. at Veterans Butane Gas Co. and later, National Butane in Atmore. In 1969, they purchased the Ford dealership in Evergreen and it became Ronnie Mullen Ford. In 1981, they sold the business and established Asphalt Specialists Paving Co. where Ronnie worked until his death in 2004. His family continued to run the business.

Vickie and her husband, Doug Miles, reside in Troy, Ala., where Vickie works as Registrar and Asst. to Provost at Troy U. She also teaches in the Leadership Program. She has an A.A. from ACC, B.A. in lib. arts from Faulkner U. and M.S. in fd. of ed. from TSU. Doug has an AA from ACC and B.S. in mkt. from AU. They are the parents of two children: Ashley Maria, b. 1982, m. Jonathan Godwin, son of Zack and Rosalyn Godwin; and Carter Aaron, b. 1987, m. Janet “Jan” Catherine McGuire, daughter of Judge Trippy McGuire and Margaret Moore.

Ashley and Jonathan live in Auburn, and she works in Montgomery as Dir. of AUM Speech and Hearing Clinic and Chm. of AUM’s Dept. of Speech Communication Disorders. She has a B.S. in sph. Comm. disorders and Dr. of audiology, both from AU. Jonathan has a B.A. in bus. from AU and is Reg. Dir. of J.B. Hunt Co. They have a daughter, Aubrey Anna. and expecting a son, Miles Will, due in June. Carter and Jan reside in Auburn where he is a mech. engr. at AU. He has a B.B.A. in mkt. and a B.S. in mech. engr. from AU. Jan has a B.B.A. in mkt. and M.S. in adult ed., both from AU and works as an admissions coordinator for AU.

Angie and her husband, Tony Raines, reside in Evergreen and manage the Asphalt Specialists business. Angie attended ACC and later earned an B.A. in hum. resources from Faulkner U.  She taught school several years before joining the family in the asphalt bus. They became the parents of two children: Victoria “Torey” De Nae, b. 1987, m. Conner Randall Madden: and Tony Randall Jr., b.1988, single. Torey earned a degree in nail tech. from LBW and works in Evergreen, and Randy works in Brewton with McMillan Co. They have two children: Conner Randall Jr. and Gracelyn De Nae and reside in Evergreen. Tony Jr. attended AU and returned to Evergreen to work in the family’s asphalt bus.

The oldest son, Frank Donald Moore, attended A.H.S. and TSU afterwards where he was elected president of the freshmen class. He was an excellent salesman and spent most of his life selling autos, particularly with his business, Frank Moore’s Used Cars. In 1962, he married Elizabeth Ann Easley, daughter of Forrest Lee Easley and Elon Elizabeth Gafford. Ann attended Judson C. and later worked in the banking industry. They built a home on Easley Drive near Ann’s parents. Frank experienced serious health issues and tragically died in 1981 at the young age of 41.

Frank and Ann were blessed with two daughters: Melissa Ann, b. 1964; and Malinda Kay, b. 1976, m. Christopher Travis Martin. Melissa lives in Prattville, is single and works in the restaurant business. Malinda and Chris reside in Andalusia where she owns and manages Merle Norman Cosmetics. She earned an A.A. from McArthur Tech. and LBW Jr. C. She has a son, Austin Daniel Leverington, b. 1996, single, and studied indust. Electronics at MacArthur Tech. She recalled how her daddy loved music and enjoyed singing “Amazing Grace” while playing his guitar, and the entire Moore family enjoyed singing gospel hymns.

The second son, James Eugene Moore, was graduated from A.H.S. He has a B.A. in Bible from ACC and M.A. in Bible from Ala. Sch. of Religion plus 30 hours post grad. work, some from USM. He was awarded an honorary Dr. of Human Letters by FU. He served 12 years as preacher for Cov. Rd. CofC in Natchez, Miss. and 12 years for Concord St. CoC in Orlando, Fla. Afterwards he served 30 years as Pres. of Mt. Dora Christian Acad. & Children’s Home, Mt. Dora, Fla. Since 2019, he has served that institution as Pres. Emeritus. In 1966, he married Shirley Katherine Arnold, daughter of Wade Alfred and Sammie Kate Arnold. Shirley earned an A.A. in elem. ed. from ACC. She worked as a legal and medical office asst. in addition to being a devoted wife and mother.

James and Shirley are the parents of two children: Scott Eugene, b. 1969, m. Cassandra Cochran div. later. He has B.S. in bus. adm. from FU and has pursued a career in the pet industry. He resides in Cummings, Ga., and is a nat’l sales mngr. They have a son, Brady Jordan, b. 1995, single, who has B.S. in mkt. from U.So.F., and lives in Sarasota, Fla.; and Tonya Gayle, b. 1972, m. Scott Alan Woodbury. She has B.S. in elem. ed. from Limestone C., Gaffney, S.C. and M.A. from Converse C., Spartanburg, S.C. She earned a gifted ed. cert. and teaches classes for gifted students.

The youngest son, Ferris Gordon Moore, was graduated from A.H.S., earned A.A. from ACC and later attended Huntingdon C. studying math. In 1971, he opened a Wet Pets store on McGehee Rd. in Montgomery where he still works, one at Eastdale Mall in 1977 which operated for 30 years, and one in Univ. Mall, Tuscaloosa, in 1980 which operated for 10 years. In 2008, he opened Petland in Eastchase Mall. In 1969, Gordon married Nita Diane Creech, daughter of G.L. and Neva Creech. She earned an A.A. at ACC and has worked part-time at FU along with being a homemaker.

They have two daughters: Leah Jeanette, b. 1972, m. Daniel Keith Evans; and Holly Elise, b. 1974, m. Newt Greer Norton, div. later. Leah has a B.S. in organic chem. from AUM and has worked last 13 years at Petland. Keith has a B.A. in bus. adm. from FU, worked 30 years in pet bus. and current mngr. of Petland. They have two children: Daniel Grayson, sr. at UA in phy. ther.; and Kaitlyn “Katy” Jeanette, freshman at UA. Holly has B.S. in mkt. from AUM and has worked at Petland for the last 13 years. She is the mother of Meredith Reed, m. Payton Lackey, and has B.S. in soc. wk. from TU; and Kyndall Greer, sr. at TU majoring in human resources.

Cordelia (Thomasson) Moore is remembered by her children: Her daughter, Wynette, described her as “One of the kindest, most loving and compassionate people I have every known. She was a very spiritual person, and she had genuine Christian qualities such as forgiving others, never criticizing, and ignoring social and class distinctions. She freely shared with others and always gave the best she had. In her words, ‘God will bless us a thousand times over!’ Her desire was for everyone to go to Heaven, and she lived her life toward that goal. Her example left a lasting impression on all her children and on many others as well.” Her other children seconded this and mentioned other points such as Proverbs 31 describing her so well and her exceptional hospitality. She put God, her family, her church family and Christian living first in everything.

Dorothy (Thomasson) and Willie Henry Lawson made their home…