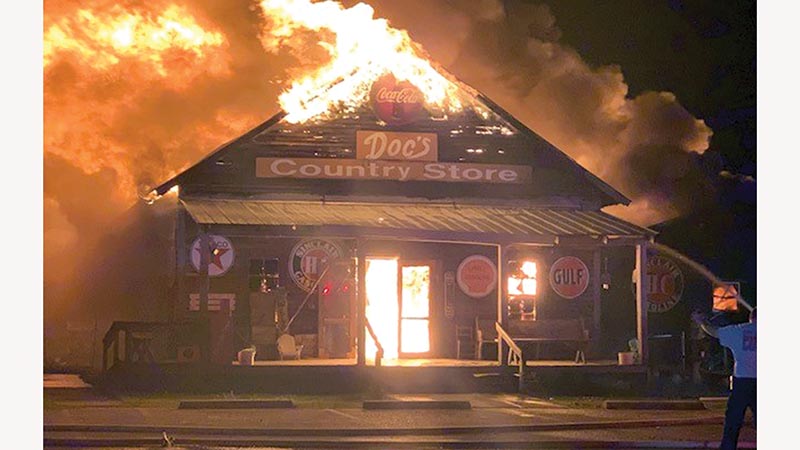 The Opp Fire Department, with assistance from other departments in the area, battled a fire at Doc’s Country Store Monday night. PHOTO PROVIDED

An Opp business that served as a meeting place for local residents and a unique stop for travelers was destroyed in a fire Monday night.

The Opp Fire Department responded to the location of Doc’s Country Store on Veterans Memorial Parkway at approximately 9:35 where they found the building engulfed in flames and smoke.

Opp Fire Chief Corey Spurlin has said the main structure is a total loss. Members of the OFD continued to work hot spots at the scene as of mid-morning Tuesday.

Assisting the Opp Fire Department on the scene were firefighters from Andalusia, Elba, Union Grove, Babbie, Florala and others.

The restaurant and store has been in operation for about 15 years and included the Boothe Family Museum of vintage vehicles and structures, including a 100-year-old cabin that was restored in 2003. The extent of damage to the secondary structures could not be confirmed on Tuesday, but firefighters worked to protect them.

“We indeed lost a great ‘friend,’ in losing this special place,” said Opp Mayor Becky Bracke. “It was more than a business or a store. It was a restaurant, a gathering place, a destination for travelers and Opp citizens alike. Over the years, it had truly become an Opp institution, serving as a place where meetings were held and reunions were enjoyed.”

Mayor Bracke added that the owners of Doc’s worked hard to make Doc’s a special place for the community of Opp.

“While Doc’s meant a lot to so many, it was part of the heart and soul of Steve, Elaine and TJ Boothe. Doc’s came about as a labor of love from these three outstanding citizens. Together, they had poured their hearts, their time and their energy into making Doc’s the special place that it was. They were determined not only to preserve history, but to share it with others also,” Bracke said.