The Albritton Family’s Legacy of Service 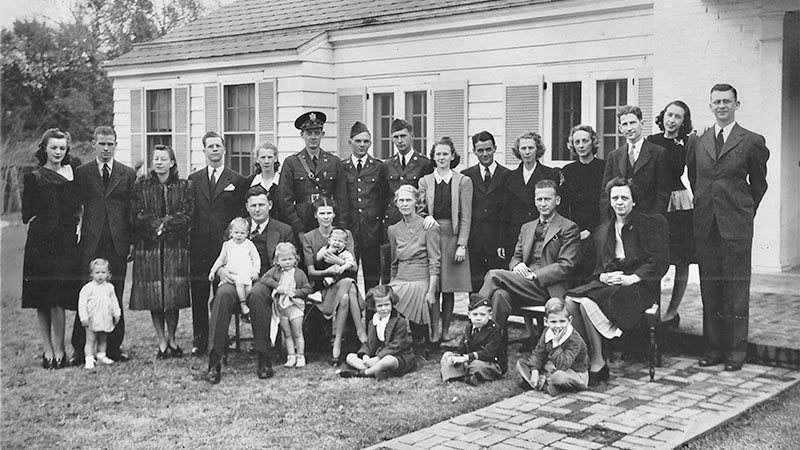 Recently, Dr. Bill Albritton brought the author a photograph of his family reunion taken Christmas 1941, just a little over two weeks after Pearl Harbor. The matriarch of the Albritton family, Annie Rebecca Mashburn Albritton, is surrounded by 10 of her 11 children. Her husband, William Harold Albritton, had died in 1929. He had been a partner in the law firm with his father, Edgar Thomas Albritton. Pictured within the photo are several of the Albritton family who had a remarkable record of service to their country.

John Thomas [far left] with wife, Mary Neill, had tuberculosis and did not serve.

Next is Jesse Tignor with wife, Frances Josey. He was a career Air Force officer.

Next is Apsilah Daniel Albritton Terry [her husband Durham sits in front].

Next is Edward Harman Cabannis, III [in uniform with wife Mary seated in front]. He served with the Army in North Africa and Italy.

Next is a family friend John C. “Bud” Hart who served in the Army.

Next is Margaret “Monnie” Albritton who worked at the Oak Ridge Nuclear facility.

Next is Robert David Conner, Jr. and his wife, Annie Rebecca Albritton Conner.

Next is Carrie Veal Albritton with husband Robert Bynum Albritton seated in front.

Next is Ophelia Adams Albritton and husband, James Marvin Albritton who served in the Navy.

Edward H. Cabannis III, husband of Mary, was in the 20th Combat Engineers and served in North Africa and Sicily. He landed at Normandy three weeks after D-Day but was sent home after developing malaria. After the war, he worked for General Electric. One of his projects was working on the Polaris missile guidance system.

Edward H. Cabiness IV [called Ned by the family] served in the Army as an infantry officer before transferring to Military Intelligence. He worked in the Pentagon and was an interpreter and action officer with the U.S. delegation to the START II talks. He taught Russian at West Point and national security at the Army War College before retiring as a colonel.

Durham Terry’s brother, Dr. Luther Terry joined the Public Health Service in 1942. President John F. Kennedy named him Surgeon General of the United States in 1961. Dr. Terry was known for his campaign against tobacco use during his four years in office. He later served as a consultant to the American Cancer Society.

Dr. Terry’s work in the Public Health Service influenced Dr. William Leonard [Bill] Albritton. Bill Albritton was not in the photo above. Bill is the son of William H. Albritton, Jr. and Anne and was just a couple of weeks old at the time. He trained as a physician and spent more than four years in the Public Health Service working with the CDC. He served a couple of months at the Carville Hansen’s Disease hospital in Carville, Louisiana. After retiring from the Public Health Service, Bill taught at several medical colleges at Saskatchewan, Manitoba and Alberta. He retired in 2017 as Dean of the Medical School in Saskatchewan and moved to Andalusia. Bill is married to Elizabeth Renfroe Albritton.

Marvin Albritton served in the U.S. Navy during WW II. After earning his law degree, he joined the Albritton Law firm in Andalusia.

Dempsey Albritton became an Army Air Corps pilot during WW II and flew C-47s. After the war, he married Lucille Martin. His story will be told in a separate article next week.

Jesse Tignor Albritton was an accountant in the Army during and after WW II. He rose to the rank of colonel and was Chief of the Systems Division of the Comptroller, Headquarters, Air Materiel Force for the European area.

The young man in a uniform seated in front is Harold Albritton, son of Robert Bynum and Carrie Albritton. Harold served in the Army infantry before transferring to the JAG Corps. He left the Army as a captain in 1962 and joined the Albritton Law firm. President George H. W. Bush named him a federal district judge for the Middle District of Alabama in 1991. He is currently on Senior Status with reduced work load. Harold is married to Jane Howard Albritton.

Two of their sons, Hal and Tom were partners at the Albritton Law firm at one time. Tom was named Executive Director of the Alabama Ethics Commission in 2015. Their third son, Ben, works in the Alabama Attorney General’s office.

The Albritton Law firm was established in 1887 by Edgar Thomas Albritton and Dempsey Powell. In addition to the family members, several of its former partners served in our country’s military service.

John B. Givhan was an Army helicopter pilot in Vietnam. He was combat-wounded and retired from the Army as a 1st Lt. after losing a leg in Vietnam. John joined the law firm in 1972.

Rick Clifton served in the Air Force JAG Corps. After four years he left active duty and joined the law firm in 1984. He retired as a Lt. Col. from the reserves after 17 year’s service.

Ben Bowden served in the Air Force JAG Corps and is a colonel in the active reserve. He joined the Albritton Law firm in 1997. He was appointed Covington County Probate Judge in 2008. He is currently serving as a Circuit Judge in Covington County.

The legacy of the Albritton family has a rich heritage in the history of Andalusia, Alabama. Edgar Thomas Albritton founded what would become the state’s oldest law firm there in 1887. He would also become the city’s first elected mayor in 1888. Many of the descendants not only served Andalusia and the state of Alabama but the military services of our nation.

Author’s note: I would like to thank Dr. Bill Albritton and other members of the Albritton family for their help in writing this article.