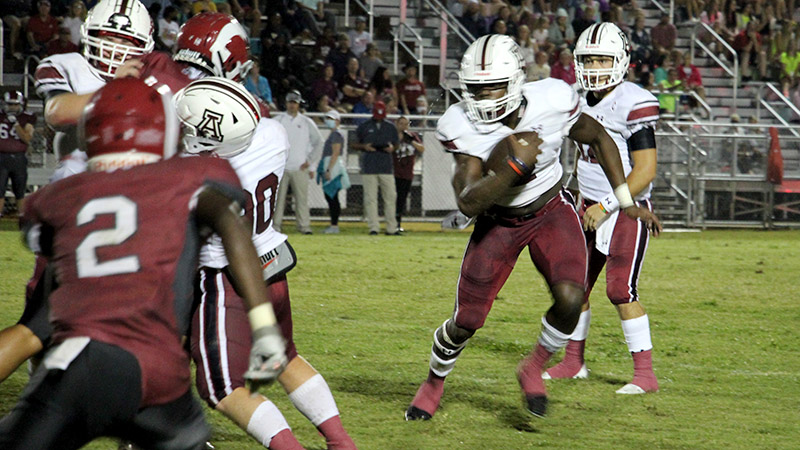 After Andalusia came up on the short end of a 10-9 thriller last season against Faith Academy, this time around it was the Bulldogs’ turn to come up with the big win, 21-20.

Faith Academy (0-1) came into the game as the second-ranked team in 5A. They held a 14-6 halftime lead over Andalusia (1-0), but the Bulldogs found some rhythm in the running game.

Andalusia struck first after recovering the ball at the 31 on a Faith botched punt attempt. On third-and-four, senior Mike Hourel found a hole for a big play, dragging defenders the last few yards into the end zone. The point-after attempt was no good.

The Rams were having some success on their next possession, but the drive came to an end when another senior, Joseph Turner, hauled in an interception.

Faith took the lead early in the second after a 65-yard drive. The PAT put them in the lead, 7-6.

With less than 5 minutes to go, the Rams added to its lead after a 75-yard touchdown drive. The score led to a 14-6 halftime lead over the Bulldogs.

Andalusia got off to a strong start in the second half. After stopping the Rams on a three-and-out, the Bulldogs would turn to Hourel and J’Marion Burnette and the ground game. From the 24-yard line, Burnette found a hole and went in for the score. His number was called again for the successful 2-point conversion, tying the game at 14.

But, Faith Academy came right back with a 65-yard drive of their own to retake the lead, 20-14. The extra point was no good.

The Bulldog defense stepped up late in the game. After the Rams moved the ball close to midfield early in the fourth, senior D’Iandre Sheridan got a big sack that helped lead to a Ram punt.

Andalusia went three-and-out on the next drive and the punt was downed at the 30-yard line. A holding penalty backed the Rams up and that was followed by a tackle for loss by Cameron Johnson, bringing up a fourth down. On the punt, the ball was dropped and Andalusia recovered at the Ram 12-yard line with under 4 minutes to go.

From there, the Bulldogs leaned on Burnette. He picked up 5 yards on first down and another 3 yards on second down. With only 1 yard on third down, the Bulldogs faced a fourth-down-and-one at the 7. Once again, the ball went to Burnette who powered forward for the first down. On the next play Andalusia went the six yards into the end zone for the tie at 20-20. Ayden Amis tacked on the important point-after to give the Bulldogs a 21-20 lead with 1:29 to go in the game.

The defense took care of the rest as they held the Rams to end the game.