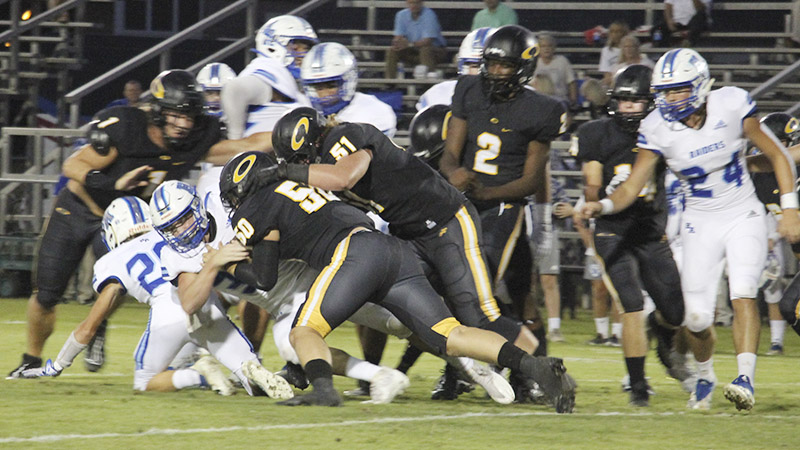 Tanner Hall, left, and Wyatt Horn, right, led the Opp Bobcats in a strong defensive showing over the Houston Academy Raiders for a big win.

The Opp Bobcats scored fast and often against the Houston Academy Raiders to claim their second area win of the season, 49-21.

After each team exchanged punts to open the game, Opp got on the scoreboard on the second play of their second position. Quarterback Gray Jennings found Terry Davis, both juniors, for a long pass of 67 yards into the endzone. Jackson Pierce’s point-after attempt gave Opp a 7-0 lead.

That score stood until the second play of the second quarter when Opp once again struck on a big play. On third-and-five, Jennings found Jabarri Hill for a 44-yard touchdown strike to increase the Bobcat lead to 14-0.

On the kickoff to Houston Academy, the returner lost the handle and the Bobcats pounced on it at the 36-yard line. Jennings ran the ball on first down, picking up 27 yards down to the 9-yard line. Davis took the handoff on the next play and weaved his way into the endzone. Pierce knocked home the PAT to increase the Bobcat lead to 21-0 with 10:23 remaining in the first half.

Houston Academy’s next possession ended when DaDa Stoudemire hauled in an interception at the Pirate 36. Zeb Green picked up 11 yards on a first-down run, followed by another six yards on a QB keeper by Jennings. The Bobcats got into the red zone on a 14-yard pass to Zacchaeus Lindsey. It was Davis who completed the drive, taking it in from 3 yards out. The point-after made the score 28-0.

A short kickoff with a decent return set the Pirates up at midfield for their next drive. Employing a bit of trickery with a reverse-pass, Houston Academy was able to punch the ball into the end zone to get on the board with only 59 seconds remaining in the half.

That was plenty of time for the Bobcats to do more damage. On the first play, Jennings threw a strike to Lindsey who was brought down about three yards short of the goal line. A penalty for an ineligible receiver negated the big play, but the Bobcats went right back to it and this time Lindsey took it all the way, leading to a 35-7 halftime lead for Opp.

Neither team would score in the third quarter, but each put up 14 in the fourth to make the final, 49-21.

Jennings was near perfect, going 11-for-12 for 267 yards passing and four touchdowns. At one point in the game, he completed 10 consecutive passes.

On defense, Cole Jennings led the charge with 16 tackles and 2.5 sacks. Hayden Norris and Will Spurlin had 10 tackles each and Robbie Gafford and Nelson hall each recorded eight tackles. Tanner Hall and Wyatt Horn added seven tackles each.

With the win, Opp improves to 3-1 overall and 2-0 in the region. They will play the second of three straight home games next week when Daleville (0-4, 0-2) visits for another region contest and the Bobcats’ homecoming.