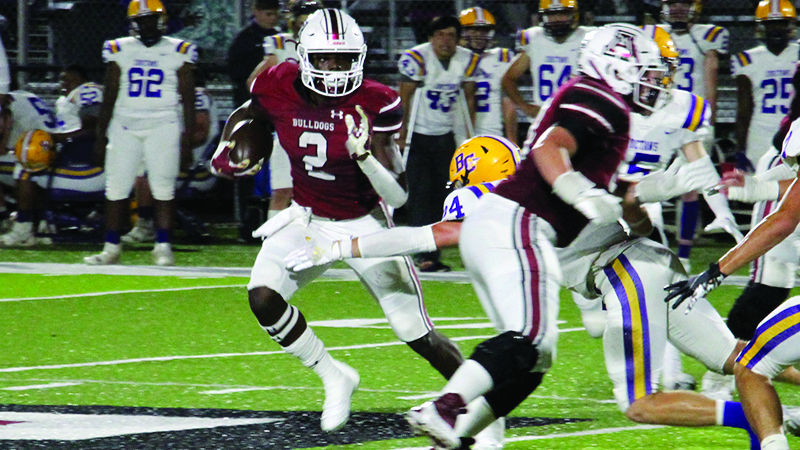 The Bulldogs took an early lead in the game and the defense managed to keep the Choctaws in check throughout the night.

Andalusia Head Coach Trent Taylor said he was proud of his team’s focus throughout the week that led to the team’s victory.

“I thought they did a good job all week long. I was proud of the way we practiced and I’m really proud of the defense. Anytime you get a shutout it’s a big deal,” Taylor said.

The Bulldogs struck early in the game. From their own 36-yard line, Zavier Hamilton got the offensive night going with a 24-yard run across midfield to the Choctaw 40. A couple plays later, J’Marion Burnette found runing room for a 21-yard pickup to the 21. On a third-and-four, Ayden Amis found Omare Latimer open for nine yards to the 4-yard line. Burnette would complete the drive a few plays later on a 2-yard run. Andalusia went for the 2-point conversion and Amis found Hamilton open in the endzone to make the score 8-0.

A hard hit by a Bulldog on the kickoff jarred the ball loose from the Choctaw returner, and John Bolen was there to recover for AHS at the 20-yard line.

On third-and-nine from the 19, Amis found Burnette between two defenders right at the goal line to increase the Bulldog lead to 15-0 after Cole Morgan’s successful point-after.

From there, the remainder of the first half was mostly dominated by the defenses and neither team scored in the second quarter.

Andalusia received the kickoff to start the second half and went to the running game, primarily with Burnette who carried the ball nine times on the drive for a total of 34 yards, including a 2-yard touchdown run. Morgan’s point-after was good, giving Andalusia a 22-0 lead with 6:13 to go in the third quarter.

After another defensive stop, Andalusia took possession at their own 28-yard line after the punt. On a third-and-three, Burnette took another handoff and his exploded for a big 44-yard run to the Bibb County 21. The Bulldogs got as far as the 10-yard line, but settled for a 27-yard field goal by Morgan to increase their lead to 25-0, which would be the final.

The Bulldog defense was stellar, giving up only 145 total yards in the game. Michael Hourel Jr. led the charge with 12.5 tackles, including a sack and two tackles for losses. Josh Riley added six tackles and two TFLs while Diandre Sheridan had 4.5 tackles and one tackle for loss. Travon Thomas recorded an interception.

Leading the receivers was Lucas Jordan with three receptions for 36 yards and Tycamren Jackson caught three balls for 22 yards.

The Bulldogs get back into region play next week when they travel to Headland who were 1-4 overall going into Friday night’s contest against Dale County. Next week marks the final regular season away game for the Bulldogs. They finish the season with three consecutive home games, including two region games.

With the victory over Bibb County, Andalusia is 4-2 overall and 2-1 in Region 2. Pike Road currently stands atop the region at 3-0.