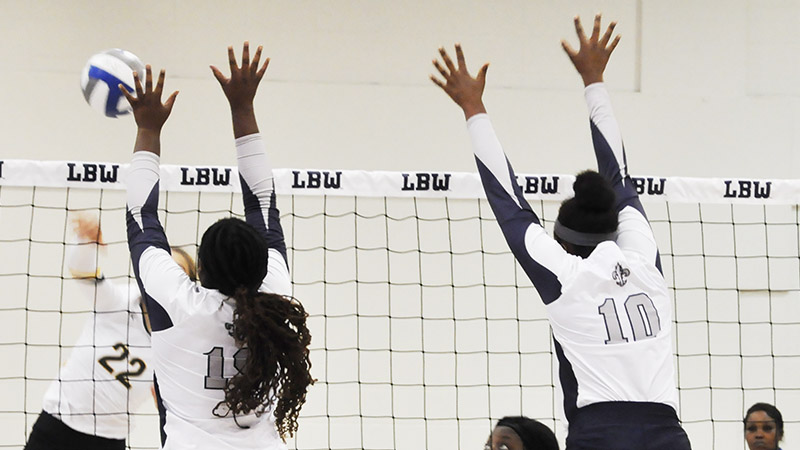 Head Coach Janie Wiggins said, “We are still working on finding a way to win versus trying not to lose. Bishop is a young but talented team. I think we just need to work harder for every single point. We have minimized errors over the last week, so that’s an improvement.”

The Wildcats improved to 10-8 overall and 8-7 in the Alabama Community College Conference while the Saints fell to 4-12 and 3-10 in ACCC play. 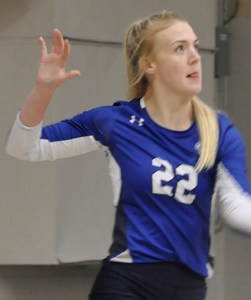 Maggie Haynes stays focused as she prepares to serve the ball for the Saints.

Both teams played to a 2-2 tie in the early stages of the first set. Samantha Moore gave BSCC a 4-2 lead with a kill before a service error cut the deficit to 5-4. Zoe Van Rijn then delivered a kill to begin a 10-1 run. MaKayla Jones earned three kills to increase the lead to 15-5. Caleigh Davis blistered a kill as LBWCC trimmed the gap to 17-8. Kamira Cooper added a kill at the 20-11 point, but Moore used a kill and ace to give the Wildcats a 23-12 cushion. Service errors allowed the Saints to fight back to 23-16. It was not enough to overcome, and Bishop State took a 1-0 lead with a 25-16 win.

Brianna Wilson earned a kill to start the second set as the Saints built a 3-1 lead. Moore drew the Wildcats even at 3-3 with a powerful kill. Cooper kept LBW within striking distance before Jones pushed the score to 6-4. After three straight points from Bishop State, Ashton McCullar delivered a clutch block to pull back within two at 9-7. Wilson used a vicious kill and fought back within four at 14-10. Rijn then executed another kill to build a 16-11 lead. Callie Crider followed suit, and Cooper tallied a pair of kills to draw LBWCC even at 17-17. The two teams went back and forth to force a 20-20 deadlock. Despite another kill from Crider, BSCC held on for a 25-21 win and 2-0 lead.

LBW began the third set with a 2-0 lead as Jones cut it in half with a kill. Bishop State was forced to play catch up after trailing 5-1 and did just that. Moore capped an 8-3 surge with an ace and gave her side their first lead of the frame at 9-8. Crider continued to dazzle with some electrifying kills as LBWCC knotted the score 12-12. Jones gave BSCC a 14-12 lead with back-to-back kills, but Crider and Cooper made it 14-14. The Saints hung tough and forced yet another tie but could not capture the lead. A kill by Rijn and ace from Molly Kate Atkins gave the Wildcats a 21-18 advantage. Wilson brought it down to two at 22-20 until Jones added two kills for another 25-21 win to seal the match. 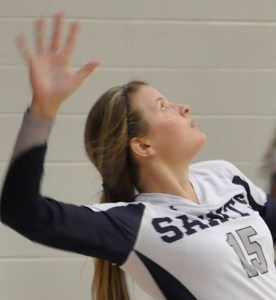 Callie Crider awaits the ball during a play for the LBWCC offense.

Wilson led the charge with 8 kills while Cooper and Crider each added 6. Maggie Haynes tallied 5 digs as Alex Green and Crider chipped in 4. Maddie Rasmussen finished with 16 assists and 4 digs. Davis and Cooper both collected an ace, and Williams and Wilson shared the lead with 2 blocks apiece.

Next up for LBWCC is a long road trip to Catawba Valley Community College where the Saints will play four matches Friday, Oct. 1, and Saturday, Oct. 2. LBW meets St. Johns River State College at 3 p.m. and Cape Fear CC at 4:30 p.m. on the first day. The tournament concludes with an 8 a.m. showdown against Spartanburg Methodist and Lake Sumter State College at 11 a.m. on the second day.

“We are headed to North Carolina. I think this is a great opportunity for the team to find more consistency and play more as a team,” Wiggins said.

The next home match for LBW is Monday, Oct. 4 at 6 p.m. against Wallace-Selma Community College.

Author’s Note: Photos for this story were contributed by Maggie Hammonds.