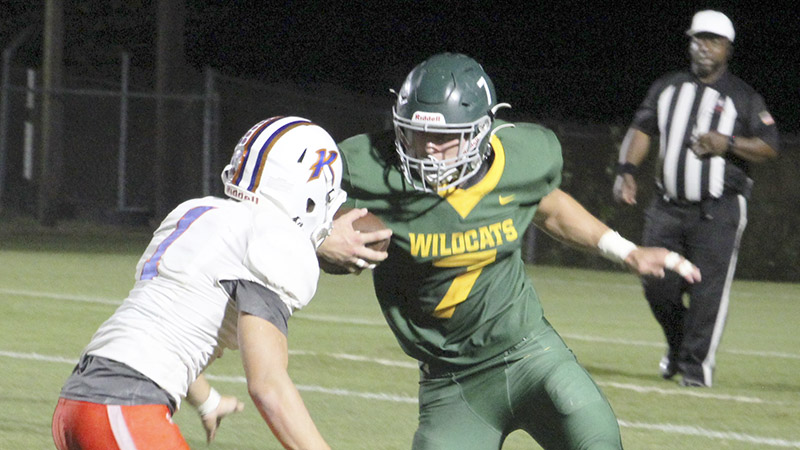 Florala senior Austin Howell cuts back against a Kinston defender.

Florala held a lead for two and a half quarters in their homecoming matchup with Kinston, but penalties and two turnovers down the stretch led to a 35-20 region loss for the Wildcats.

After each team exchanged possessions to the start the game, Florala got on the board with a 49-yard drive. From the 42, Rayshon Coleman found Austin Howell open for a big gain to the 21-yard line. The drive almost stalled there, but Howell, now at the quarterback position, completed a fourth-and-nine pass to Elijah McMeans for the touchdown. Dalton Jackson hit the point-after to give Florala a 7-0 lead with 3:15 to go in the first.

The Wildcat defense did its job on the next possession, holding Kinston to a three-and-out and forcing a punt that was returned a few yards to the 13. It took Howell only one play as he found a hole in the Kinston defense and sped the 87 yards for the score. The point-after lifted the Wildcats to a 14-0 lead with 1:03 to go in the first.

Kinston stayed close with a big play of their own, returning the ensuing kickoff to the Florala 11-yard line. They scored on the next play to cut the Wildcat lead to 14-7.

Early in the second, Kinston pulled out an interception, but two plays later, Howell came up big again, hauling in his own interception at midfield and returning it all the way to the endzone to lift Florala to a 20-7 lead.

Kinston continued to answer the Wildcats and followed up with a three-play drive to cut the lead to 20-14 going into the half.

Florala drove as far as the Bulldog 33, but a holding call and a false start backed them up too much to make up.

Kinston added to its lead on the next drive with the help of two personal foul penalties against the Wildcats, making the score 28-21. A third personal foul was called against Florala after the touchdown.

Two of the Wildcat possessions down the stretch ended in interceptions, the second of which led to a game-clinching score for Kinston with 1:39 to go.