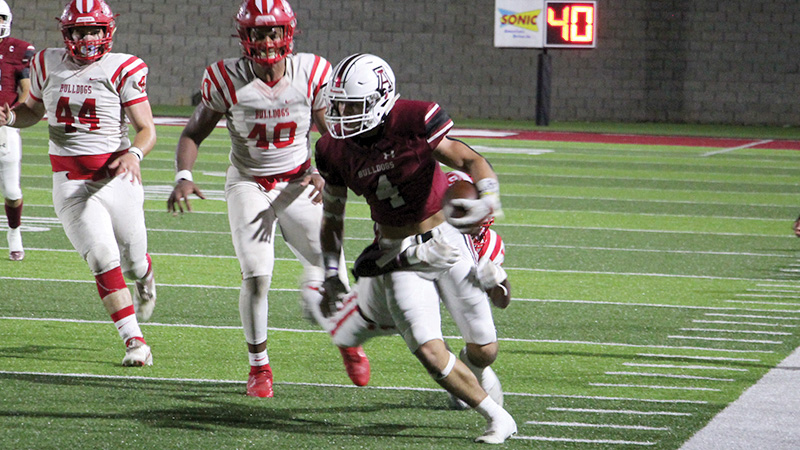 Joseph Turner breaks away from a Crestview defender.

The Andalusia Bulldogs led for three and half quarters, but ultimately fell to the Crestview Bulldogs in a cross-state game, 27-21.

The Andalusia Bulldogs was first to bite, scoring on their first possession on a 60-yard run touchdown run by J’Marion Burnette.

Crestview kept pace with a 60-yard drive that was capped by a 1-yard push into the end zone.

Burnette was quick to get Andalusia back on top. On the second play of the next drive, he took the handoff for another big run, this one a 59-yarder to make the score 14-7.

While Andalusia was scoring quick, Crestview was taking the longer approach and marched down the field for over 5 minutes before punching the ball in for the score. The PAT was no good, leaving Andalusia with a 1-point lead, 14-13 with 1 minute to go in the first.

The scoring slowed down in the second. Crestview’s drive midway through the quarter was stopped with an interception by Joseph Turner.

Andalusia capitalized on the turnover to increase its lead. Burnette took consecutive handoffs for a combined total of 31 yards, but this time it was Omare Latimer who capped it off with an 18-yard touchdown run. The point-after by Cole Morgan was good to make the score 21-13 at the half.

Crestview did have a chance from their own 15 at the end of the half, but the Andalusia defense held to stop the threat.

The scoreboard did not change in the third and well into the fourth as Crestview managed to slow down the Andalusia running game.

With 9:29 showing on the clock, Crestview took possession and drove the ball downfield over almost 6 minutes, ultimately scoring on a fourth-and-1 play that went 34 yards into the end zone. A two-point conversion was good to tie the game at 21 with 3:44 to go.

Andalusia took control with the chance to take the lead, but could not convert on a fourth-and-1 from their own 25-yard line, setting up good field possession for Crestview who scored to take their first lead of the game, 27-21, with only 33 seconds remaining. The PAT after the touchdown was no good.

Andalusia took the kickoff, Ayden Amis completed a 23-yard pass Burnett to set the Bulldogs up at the 47-yard line. Another pass to Kaden Denson was completed for 16 yards to the 37. With only 2.5 seconds remaining, Crestview was called for pass interference, giving Andalusia one more chance with no time left on the clock. The final pass into the end zone was broken up by a Crestview defender.

Statistically, the numbers between the two teams were close, but AHS Head Coach Trent Taylor credited Crestview with making adjustments that slowed down his offense in the second half.

“I thought we did a good job running the football in the first half and they made adjustments. It was on me. We had to go for the first down I felt like. Our defense was gassed and had been on the field pretty much the whole second half. We’ll learn from it,” Taylor said.

Burnette continues to rack up the yardage on the ground for Andalusia, picking up 217 yards on 18 carries. Latimer finished with 80 yards on the ground.

Quarterback Ayden Amis went 8-of-15 for 57 yards passing. Burnette caught two passes for 18 yards while Denson caught one for 16 and Joseph Turner hauled one in for 14.

Leading tackler was Mathew McDonald with 8.5 while Michael Hourel Jr. and Zavier Hamilton each had 7.5. Mark Hart recorded the only sack for the Bulldogs.