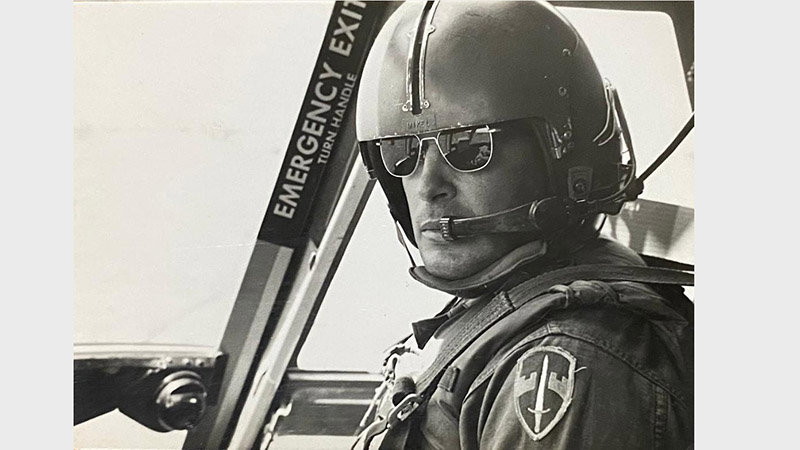 CWO Joe Mikel in the cockpit of his H-21 Shawnee helicopter during his first tour in Vietnam in 1962. It was during this tour, Mikel was awarded the Distinguished Flying Cross. [Photo: the Mikel family]

It was getting late, almost dark, when the pilot of the H-21 gently eased the nose-gear of his helicopter against the hill in front. The aft landing gear was still in the air. To evacuate the 12 wounded men from the steep mountain side, he would have to hover, nose down, low enough for them to enter through the side door, about 20 feet behind the cockpit. The tandem rotors of the H-21 made the maneuver extremely difficult. If the tail rotor dropped below horizontal, it would strike the trees below. The front rotor was just feet from the hill-side in front and time was critical because the Viet Cong were just over the hilltop. As soon as the troops were aboard, the pilot lifted off and flew the wounded men to Da Nang. The pilot during this daring and dangerous operation was CWO Joe Mikel, from Opp, Alabama. His courageous actions on June 13, 1962 would earn him the Distinguished Flying Cross, the first such award given to a helicopter pilot during the Vietnam War.

Joseph Malone Mikel was born November 22, 1935 in Gantt, Alabama. His parents were Charlie and Lena Meredith Mikel. They had one other son, Fred. Joe attended Weed School through the fifth grade before transferring to Brantley High School where he graduated in 1953. He and Sara Evelyn Jones were married in August of that year. He worked at several small jobs before joining the Army in 1954. Joe said that he was motivated to join the Army because of the service of his uncles during WW II, Malone Cliff Meredith, James O. Meredith and Buford Meredith.

Joe was sent for basic training to Fort Gordon, Georgia. After basic, he was trained as a military policeman and sent to Crailsheim, Germany. While in Germany, his Sergeant convinced him to apply for the Aviation Warrant Officer training program. After a couple of years, Joe rotated back to the States and was assigned to Fort Benning, Georgia. While there, he learned that he had been selected for the Aviation Warrant Officer program. He was sent to Fort Wolters, Texas where he underwent primary helicopter training and received his commission as a Warrant Officer. After that, he was sent to Fort Rucker, Alabama for advanced helicopter training and learned to fly the H-21 Shawnee. 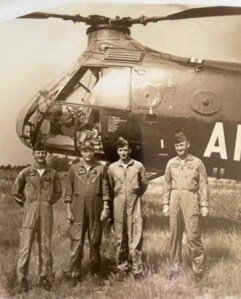 CWO Joe Mikel [third from the left] and his crew beside their H-21 Shawnee helicopter in Vietnam. [Photo: the Mikel family]

After completing training at Fort Rucker in early 1962, Joe was sent to Fort Riley, Kansas for a couple of years. By now Joe and Sara had three children, Ricky born in 1955, Jay born in 1959 and Becky [Riggs] born in 1960. After Fort Riley, Joe was sent to Hickam Field, Hawaii and assigned to the 81st Transportation Company. He was still flying the H-21 which was often called the flying banana because of its odd shape. After hearing about his new assignment, he recalled, “I thought that was going to be all sunshine, beaches and fun. Boy, was I wrong.” Joe and the family had just visited the movie set where Elvis Presley filmed “Blue Hawaii” when he received TDY [temporary duty assignment] orders to Vietnam.

In Vietnam, Joe was assigned to the 93rd Transportation Company based at Soc Trang. At that time, the Army’s Green Berets were acting as advisors to the ARVN [Army of the Republic of Vietnam] and the American public knew very little about our role there. The job of the 93rd was to supply various outposts of ARVN troops from their base at Soc Trang. The 93rd took the name “The Soc Trang Tigers” after someone presented them with a 15-month-old Bengal Tiger. They were known as “The Soc Trang Tigers” thereafter.

Most all the missions flown by the 93rd consisted of two helicopters flying together for security purposes. On the morning of June 13, 1962, WO Joe Mikel’s helicopter was one of two helicopters that were part of a mission to insert troops into a hot area of the Ashau Valley near the border of Laos. The Ashau Valley is a narrow strip of land, west of the northern city of Hue. It is bordered by mountains on both sides and was part of the Ho Chi Minh trail, the main supply route from North Vietnam. On this mission, an Army Captain was flying the other helicopter and was the flight leader. Their flight took place late in the afternoon.

After unloading their troops, the two aircraft were climbing out of the LZ [landing zone] when they received a distress call. The troops they had just offloaded were under heavy mortar fire and taking casualties. The Captain immediately turned his helicopter back for a rescue when he lost his tachometer, leaving him unable to hover. WO Mikel volunteered to take his place and proceeded to a hillside near the wounded troops. That action already described earned Joe Mikel the Distinguished Flying Cross, the first such award given to a helicopter pilot in Vietnam.

CWO Joe Mikel’s Distinguished Service Cross was presented by Army Chief of Staff General Earle G. Wheeler. In presenting the award, Wheeler said, “It takes a special brand of courage to do what you men are doing here every day. This is a dirty little war – not like anything we faced at Normandy or Inchon, Korea. I want you to know your folks back home admire you for it.”

Joe Mikel returned to the 81st Transportation Company back in Hawaii after three months on TDY in Vietnam. Shortly after he rejoined the 81st, they received orders to depart for Vietnam. On Joe’s second trip to Vietnam, his company helped established the military base Camp Holloway at Pleiku. Joe recalled some of their missions, “With the H-21, we were limited in the load we could carry. We could carry 12 troops, fully armed but had to adjust our fuel load down from a full tank. When we carried a howitzer, we broke it down and carried the barrel in a sling, separately from the carriage, which was carried by another helicopter.” At the end of this tour, Joe was assigned to Fort Sill, Oklahoma.

At Fort Sill, Joe was introduced to the new tandem rotor helicopter, the CH-47 Chinook. He spent the next three years training pilots to fly the CH-47A. After flying the H-21, Joe recalled that, “Flying the CH-47 was like driving a new Cadillac after driving a Model ‘A.’”

In 1967, Joe was assigned to the 147th Transportation Company and sent to Vietnam for his third tour. Their base was located at Vung Tao on the southern coast of Vietnam and Joe’s Company stayed at an old French Resort for about three months. During this time, the newly organized 1st Cavalry Division [Air Mobile] was brought in and Joe was transferred to B Company, 228th Battalion. At the end of this tour, he was rotated back to the States and assigned to Fort Rucker.

Back at Fort Rucker, CWO3 Mikel trained student helicopter pilots for a little more than a year. The Army was contemplating sending him back to Vietnam but according to Joe, they offered him a chance to transition to fixed wing aircraft as “a peace offering.” Joe accepted and was sent to Fort Stewart, Georgia where he learned to fly the OH-1 Birddog. After that, he transitioned to the twin engine U-21 Ute, the Army version of the Beechcraft King Air.

In 1970, Joe had been promoted to CWO4 and was ordered back to Vietnam for his fourth tour. This time he would be flying the U-21, configured for electronic surveillance. 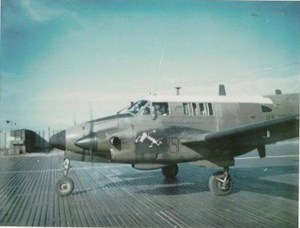 CWO Joe Mikel in the cockpit of his twin engine U-21 used for electronic surveillance in Vietnam.
[Photo: the Mikel family]

His surveillance company was stationed at Phu Bai near Hue. Joe recalled their missions, “We flew up near the North Vietnamese border. We carried lots of electronic equipment used to intercept the enemy’s signals. We also carried linguists who could interpret what we picked up.” Joe’s last tour in Vietnam lasted six or seven months before he was recalled home for a family emergency. His 15-year-old son, Ricky, had been admitted to the hospital in critical condition. The Red Cross had Joe brought back home. After Ricky recovered, Joe was assigned as an instructor pilot at Fort Rucker.

Joe Mikel retired from the Army in 1974 after 22 years-service. Besides the DFC, he had been awarded the European Theater Medal, Good Conduct Medal, the Air Medal and the Senior Army Aviator Medal.

He sold small engine parts for about a year before going to work for Opp Micolas Mills. He retired from there after working 26 years. Joe Mikel is a spry 85-years-old, living in Opp, Alabama, has his own garden and still cuts his own grass.

The author wishes to thank Joe and his son, Jay for providing his service information.