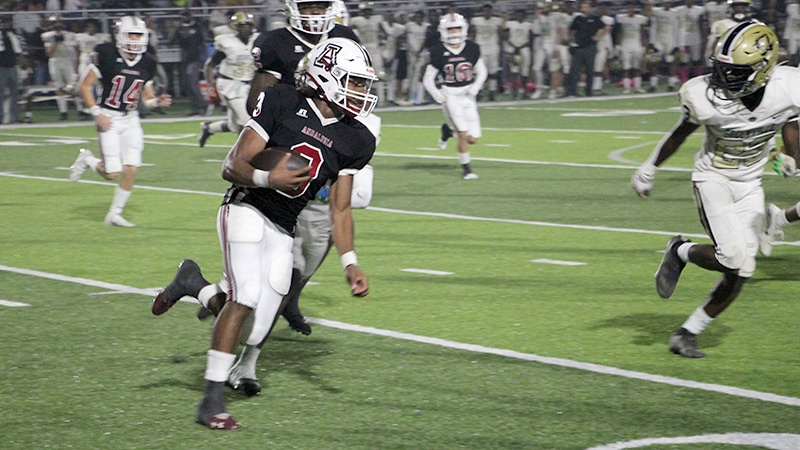 In a region contest that could give the winner an upper hand in playoff seeding going into the final weeks of the regular season, a late surge lifted the visiting Greenville Tigers over Andalusia, 28-20.

Greenville took an early lead in the contest, driving 75 yards on a long drive that was capped with a 5-yard touchdown pass. A 2-point conversion attempt was no good, making the score 6-0.

The scoreboard remained unchanged until midway through the second quarter when Greenville increased its lead on a 45-yard touchdown pass. This time, the 2-pointer was good as the Tigers took a 14-0 lead.

The remainder of the first half belonged to the Bulldogs. With 4:21 to go in the half, Andalusia got on the board courtesy of a 50-yard run by J’Marion Burnette.

The defense held the Tigers on the following possession to force a punt. This time, Andalusia went to the air as Ayden Amis found Kaden Denson in stride who took it the rest of the way for a 57-yard touchdown. Cole Morgan’s point-after tied the game at 14-14 going into the half.

The Tigers took the first possession of the second half and ate up half the third quarter on a 60-yard drive that ended with an 8-yard touchdown run by Burnette. A 2-point conversion attempt was not good, but Andalusia got its first lead, 20-14.

The teams each exchanged fumbles on the next possessions and scoring stopped until the second when Greenville got the upper hand once again.

The Tigers opened the quarter with a drive that ended with a 19-yard touchdown pass. A 2-point conversion failed to keep the game tied at 20.

Andalusia’s next possession did not last long as Greenville’s Jaquavius Sellers picked off a pass and returned it for the go-ahead touchdown. This time, the 2-point conversion was good to lift the Tigers to a 28-20 lead with 7:53 to go.

Andalusia took the next kickoff needing a touchdown and 2-pointer of their own. The Bulldogs leaned on their two runningbacks — Burnette and Omare Latimer — as they drove the ball all the way as far as the Greenville 2-yard line. A false start penalty backed the Bulldogs up, and later, on a fourth-and-goal with 3:46 to go, Greenville was called for encroachment to move the line of scrimmage back to the 2-yard line. The next play went to Burnette, but the Tiger defense gave up no ground to take control on downs with 3:38 remaining.

The Bulldog defense forced a Tiger punt, giving the home team another chance with 42 seconds remaining.

Amis found Denson for a 14-yard gain on first down, but on second down the pass was intercepted to seal the victory for Greenville.

With the loss, Andalusia fell to 5-4 overall and 3-2 in the region. Greenville, along with Pike Road, are undefeated in the region, but will face off next week.

The Bulldogs will face region opponent Carroll next week with the winner being the third seed in the playoffs. It will be Andalusia’s final regular season contest.