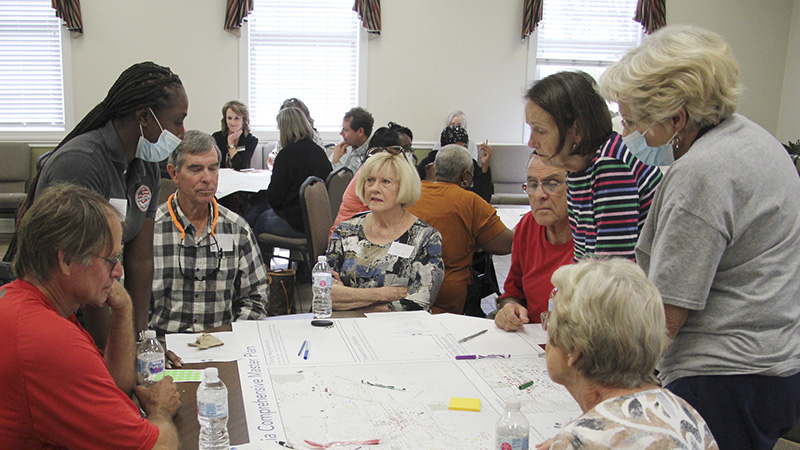 Andalusia residents attending the first of town hall meetings on Tuesday work with a map to help express their opinions that will be considered as the city moves forward with the development of a comprehensive plan.

The future for the City of Andalusia was a big topic Tuesday as city leaders and citizens joined for two town halls to collect input for the development of a 10-year comprehensive development plan.

On Tuesday morning, the Andalusia City Council held its regular-scheduled meeting — with the time changed to 10 a.m. — where they heard representatives of Concordia, an architectural and community development firm that will be assisting the city in the development of the comprehensive plan. Concordia has worked with the city on previous developments, such as the old Coca-Cola building and, more recently, the Prestwood Building.

Concordia CEO Steve Bingler spoke during the council meeting about the importance of community involvement in producing a long-term plan.

“We can’t do this without hearing from those who live here. The best work comes from listening to what people have today,” Bingler said.

The process of collecting community input began in the spring with an online survey. The in-person town halls held Tuesday allowed for even greater feedback.

“We are asking folks to prioritize what they would like to see at the neighborhood and city levels,” said Melissa Lee, director of planning and community engagement at Concordia.

Working in table groups, residents used maps, markers, and notes to communicate their opinions on the needs of the city.

Bobbie Hill, who leads Concordia’s public engagement efforts, said she was pleased with attendance of the first meeting.

“A lot of times people have the feeling (about these type of meetings) that the decisions have already been made. That is not the case here. This is a community plan and the feedback we receive will be analyzed and considered as the comprehensive plan is developed,” Hill said.

She added that there will be other opportunities for citizens to engage in the plan, including when a draft is provided to the city council.

A second town hall, following the same format, was held Tuesday at 5:30 p.m.

Earlier this year, residents were invited to a “virtual meeting,” which involved using an online survey to provide feedback about the community, how people use its assets, and what other assets are needed.