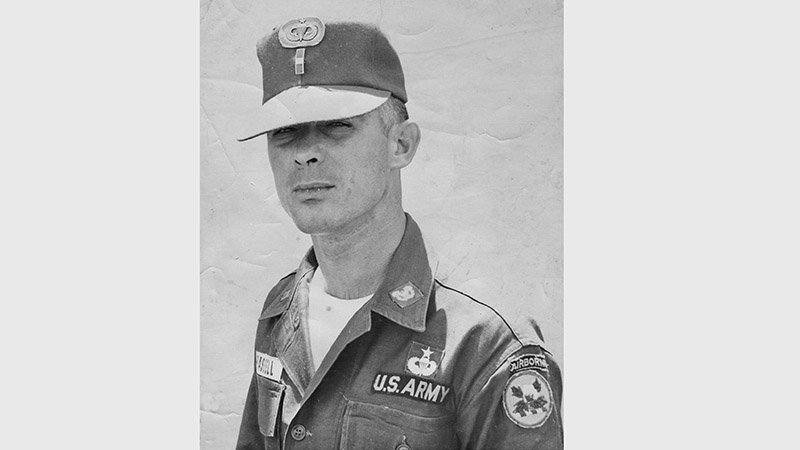 Some of the details of Jimmie Joe Hassell’s military service are lacking but his service in Vietnam was notable and worthy of remembering.

Jimmie Joe Hassell was born February 1, 1936, in Brooklyn, Covington County, Alabama. His parents were Frank [Pete] Hassell and Gladys Teel Hassell. They would have three other children, Jerry Donald Hassell, Carol Jean Hassell [Sasser] and Sharon Kaye Hassell [Little]. At some point, the family moved to Andalusia, Alabama, and Jimmie Joe graduated from Andalusia High School in 1955. He and Joann Smith were married in 1956.

Hassell joined the Army on September 7, 1955, through the Army Specialized School Program for a course in Radar and Electronics. He took basic training and airborne infantry training at Fort Jackson, South Carolina, where he was assigned to Company K, 506th Airborne Infantry Regiment. On January 6, 1956, he was assigned to the Signals School at Fort Monmouth, New Jersey, for Radar and Electronics School. Upon completion, he was sent to Fort Bragg, North Carolina, where he trained as a medic. Later, he was sent to Fort Campbell, Kentucky, where he earned his Parachutist Badge. He served two years in Germany before he was accepted for flight training at Fort Rucker, Alabama. He earned his wings and was designated a Chief Warrant Officer [CWO] just prior to being sent to Vietnam in June 1967.

Hassell was assigned to the Headquarters and Support Company, 15th Medical Battalion. His first assignments involved flying as co-pilot on medical evacuation missions.

Hassell received the Air Medal for completing more than 25 missions in support of combat ground forces between June and July 1967.

He was awarded the Army Commendation Medal his heroic actions on October 12, 1967. The commendation reads, “While serving as pilot of a UH-1H medical evacuation helicopter near Chu Lai, observing a soldier lying in an exposed area, CWO Hassell disregarding his own safety, volunteered to land his aircraft and extract the mortally wounded man. Upon landing, CWO Hassell exposed himself to possible hostile fire as the mortally wounded soldier was loaded aboard his aircraft. He then safely maneuvered his aircraft out of the hazardous area to a forward clearing station.”

Hassell was awarded the Distinguished Flying Cross for his heroic actions on December 7, 1967. He was cited for heroism while participating in flight operations near Bong Son, Vietnam. The citation reads, “CWO Hassell distinguished himself by exceptionally valorous action while serving as a pilot of a medical evacuation helicopter during a search and destroy mission near Bong Son, Vietnam….When an infantry unit became heavily engaged with a hostile force and sustained numerous casualties, CWO Hassell, disregarding his own safety, exposed himself to enemy fire as he made repeated landings into the hazardous landing zone to extract the wounded men. Though his aircraft received numerous hits, CWO Hassell elected to continue the mission.” 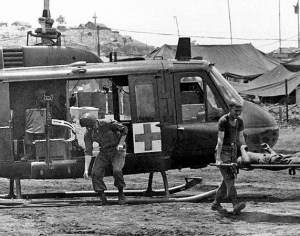 On August 4, 1968, CWO Hassell was again awarded the Air Medal [third through Seventh Oak Leaf Clusters] for meritorious service in aerial flight in the Republic of Vietnam from October 9, 1967- May 8, 1968.

We have no more official records of Hassell in Vietnam. However, his cousin, Larry W. Godwin, remembers talking to him by radio in 1970 when Godwin was stationed with an artillery unit near Saigon.

CWO4 Jimmie Joe Hassell officially retired from the Army in 1977. His DD-214 records show that he had served 24 years active duty. He worked several jobs including civilian flight instructor at Fort Rucker. He also worked at a utility company and worked off-shore but suffered from severe medical issues related to his service in Vietnam. Jimmie Joe Hassell died on December 8, 1992, and was buried at Andalusia Memorial Cemetery. He was pre-deceased by his parents and his wife, Joann Smith Hassell, who died in 1980. He was survived by his sister, Kaye Hassell Little and his children, Terri Hassell Bryan, Joni Hassell Brannon, Clay Hassell, Allison Barton Foshee and Maria Pashia-Boyer.

The author thanks Terri Hassell Bryan and Joni Hassell Brannon for their help in writing about their father’s service.