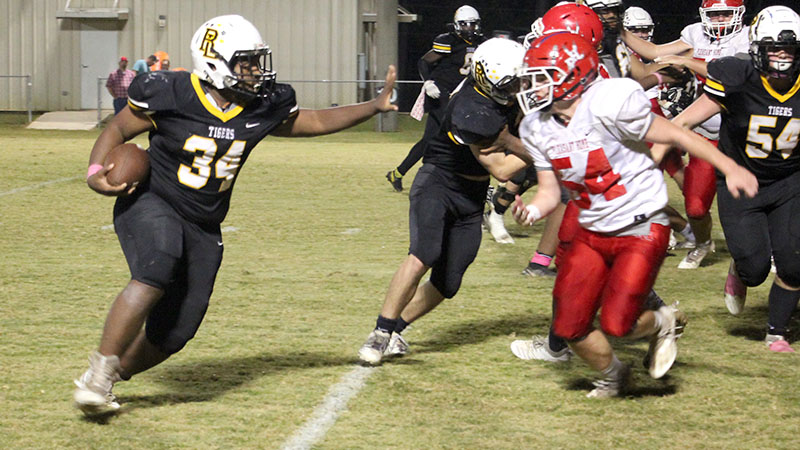 Red Level's Kentravious Likely looks for an opening and prepares to make a stiff arm against Pleasant Home's Brett Jordan.

In a hard-hitting and chippy contest, the Red Level Tigers came back from a halftime deficit to defeat the Pleasant Home Eagles, 33-22.

Each team had one possession in the first quarter. To open the game, Pleasant Home drove as far as the Tiger 6-yard line. A holding penalty backed them up and then the Red Level defense stood its ground forcing a fourth-and-out at the 17 to take possession.

From there, the Tigers began a drive that would end on the first play of the second quarter when Javen Poindexter pushed the ball into the end zone from the 1-yard line. Kennith Huckabaa’s extra point made the score 7-0.

Pleasant Home received a short kickoff and took possession at their own 43. On third-and-five, Ethan Curry found Josh Hawkins for a 15-yard gain to the Red Level 37. A few plays later, from the 19, Curry would hit Logan Bolling for a touchdown. Mason Anderson pushed the ball in for a 2-point conversion to give the Eagles an 8-7 edge.

That lead was short-lived as Malikye Wright took the kickoff about 65 yards to the end zone. A 2-point conversion failed, but the Tigers had taken back the lead, 13-8.

The score remained unchanged until the final seconds of the half. With only 20 seconds remaining, Pleasant Home’s Jordan Davis hauled in an interception and returned it about 60 yards to give the Eagles a 14-13 lead. Landon Kelley ran the ball in for the 2-point conversion to give Pleasant Home a 16-13 edge at the half.

Red Level went to its running attack behind Kentravious Likely and Poindexter to open the second half.  The Tigers pushed their way downfield and from the 2-yard line Poindexter went in for the go-ahead score, 19-16.

A flurry of flags — including multiple unsportsmanlike and personal foul penalties plagued both offenses.

Early in the fourth, from the 24, Poindexter got the ball to Wright for a 16-yard gain and then Likely finished capped the drive with a 7-yard touchdown, lifting the Tigers to a 25-16 lead with 10:43 to go.

Looking to close the gap midway through the fourth, Red Level forced a punt. But on the first play, Poindexter picked off a pass that he returned 30 yards to increase Red Level’s lead. An extra-point attempt was botched, but a quick reaction by holder Tracy Coxwell led to a successful 2-point conversion pass, making the score 33-16.

Pleasant Home hit a strike on their next possession when Curry hit Anderson for a big 64-yard touchdown, cutting the Tiger lead to 33-22. But, their chances for a comeback ended with a failed onside kick attempt.

With the victory, Red Level improves to 3-6 overall and 3-4 in the region. The Tigers will host J.F. Shields for homecoming next week.

Pleasant Home falls to 1-8 and 1-6 in the region. The Eagles host Zion Chapel next week.