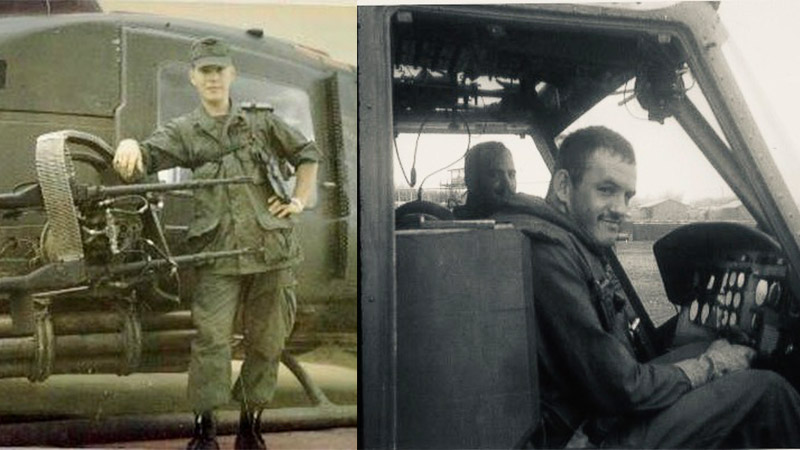 Two friends now live just a few miles apart near the community of Loango, Covington County, Alabama. How did two men, one from Holland, Michigan, and the other from Andalusia, Alabama, become close friends? The distance between their two hometowns is about 886 miles but these two men were brought together by the Vietnam War.

David Burns was born March 15, 1947, in Fort Wayne, Indiana. His parents were Richard and Roseann Burns. The family moved to Holland, Michigan, 10 years later where Dave attended public schools, graduating from Holland High School in 1965. He attended Ferris State University for a year but dropped out to earn money. He was drafted in 1966, but after testing was told he could enlist and be sent to flight school after basic training. Upon completion of basic training at Fort Polk, Louisiana, he was sent to Fort Wolters, Texas, for basic helicopter training. Dave recalls, “There I met Glynn Broom from Andalusia, Alabama, the best friend a guy could have.”

Gerald Glynn Broom was born May 27, 1947, in Columbia, Mississippi. His parents were Larkin and Miriam Broom. When Glynn was five years old, his family moved to Andalusia, Alabama, where his Dad worked for the Gulf Naval Stores. Glynn attended schools in Andalusia except for a one-year move back to Mississippi. Glynn graduated from Andalusia High School in 1965. He worked for a year with his dad who had taken a job with Hercules Powder Company. After receiving his draft notice in 1966, Glynn decided he wanted to fly for the military. He was turned down by the Navy and the Air Force because he needed at least two years of college. After a battery of tests for the Army, Glynn was accepted for helicopter training. He completed basic training at Fort Polk, Louisiana, and was sent to Fort Wolters, Texas, for basic helicopter training. It was there that he met up with Dave Burns.

After completing basic flight training, Dave and Glynn were sent to Fort Rucker, Alabama, for primary flight training. They lived in the same barracks and graduated together, receiving their Warrant Officer commissions and their Wings as Army Aviators together. After 30 days leave, they were both sent to the 90th Replacement Depot in Oakland, California.

They were on the same flight from Travis Air Force Base, California, to Ton Son Nhut Air Force Base in Saigon, Vietnam, and were able to sit together. After a few days there, they were assigned to the 11th Armored Cavalry Regiment and sent to Blackhorse Base Camp near Xuan Loc. After their arrival, the commanding officer asked them if they wanted to fly “slicks” [troops] or gunships. Dave said, “We both replied in unison, ‘Gunships!’ Glynn was assigned to the 1st Gunship Platoon and I was assigned to the 2nd Gunship Platoon. Glynn was given call sign, ‘Thunderhorse 19,’ and I was given ‘Thunderhorse 20.’ Who’d have thought that! God meant for us to be together. I did not know how important that would become later.”

Glynn and Dave both flew the UH-1C Huey. They flew familiarization missions including reconnaissance [night and day], LRRP [Long Range Reconnaissance Patrol] insertions and flew cross-country out to 200 miles. All the routine missions would change in December 1967.

Their base camp was moved to Lai Khe, about 75 miles north of Saigon in early December 1967. In what came to be known as the Pre-Tet offensive, the Viet Cong and the NVA [North Vietnam Regulars] attacked Lai Khe, blowing up an ammunition dump with satchel charges. The ammo dump was located near the area where the helicopters were parked. Several pilots, including Glenn, Dave and Dennis Clancy, scrambled to their ships to move them to safety. Dave recalled, “As we were starting the engines and moving the helicopters, I could hear 105 mm howitzer rounds cooking off and exploding, only about 25-30 yards away. By the Grace of God, we were spared any injuries.”

The three men were nominated for the Distinguished Flying Cross but they were denied by their commanding officer.

Dave recalled the actions of late December, “On Christmas Eve, we were called to a small base called Loc Ninh, near the Cambodian border to evacuate casualties. The compound had suffered a human-wave attack a few days before and were only able to hold out by firing 105 mm howitzers, point-blank into the attackers. There were Viet Cong bodies everywhere and body parts hanging in the concertina wire. I will never forget the smell.”

The Tet offensive started in January 1968. In one of the missions to support troops that had been overrun at Bien Cat, Glynn recalled flying most of the night. Early the next day, they were flying in support of tanks and personnel carriers that were under attack while guarding the Bien Hoa airbase. The daily attacks were unrelenting. After almost continuous flying, Glynn was sent to Taipei, Taiwan, for a few days rest. On the way back, he stopped overnight at Tan Son Nhut airbase near Saigon. Glynn remembered that as his worst night in Vietnam, “The base came under rocket attack during the night. I spent the night on a concrete floor with a mattress pulled over me while shrapnel from the rockets zipped through the tin walls and roof of the building.”

In March, both Dave and Glynn were dispatched to support the 11th Armored Cavalry Regiment troops in operations 20 miles west of Saigon, between Duc Hoa and Cu Chi, where the Viet Cong and NVA had set up a large force. Daily firefights went on for 17 days straight.

On March 12, Dave and Glynn, along with other gunships from Blackhorse base were sent to attack a large enemy force near the village of Duc Hoa. During the attack, four helicopters were shot down, and Dave Burns’ ship was severely damaged. Dave recalled, “We engaged the target with one other gunship and on our second or third run, we were hit by ground fire that took out our tail rotor and parts of the boom. We radioed ’Mayday’ and departed the area. We made it back to Duc Hoa and crash-landed on the pierced steel plank area on the short airstrip. CWO Dennis Clancy was the aircraft commander and sat in the right seat while I was in the left seat as the pilot. Clancy did a marvelous job of landing without a tail rotor by executing a near hover autorotation. When we hit, my safety harness failed and my face hit the gunsight, knocking me out cold.”

Glynn Broom picks up the story at that point. “I was standing near the runway at Duc Hoa, rearming my gunship when I saw a helicopter making an odd sound and coming in on a fast approach. As I turned to watch, the helicopter went into nose-high, tail-low attitude, executing a low-level autorotation. It was trailing smoke and fire and I could see holes from enemy fire. The helicopter seemed to come to a stop about 15 feet above the ground before falling to the ground like a rock, tail first. As it hit, it pitched forward onto its nose and the chin-bubble burst. As I ran to help, I saw the gunner and crew chief emerge from the rear doors and quickly open the front doors to try to get to the fire extinguishers to suppress the fire. When I got to the helicopter, I looked at the pilot in the right seat and he seemed to be OK. The pilot in the left seat was slumped over, unconscious and holding his bleeding head in his hands. He seemed to be in severe pain so I carefully helped him from the aircraft. Not until then did I realize that it was my best friend, CWO Dave Burns.”

With Burns still stunned and suffering from injuries to his face, neck, back and legs, Broom helped him to the nearby Special Forces compound and found a doctor. CWO Burns later reflected on the landing, “I don’t remember much about my rescue but I know Glynn pulled me out of that burning chopper, standing in a couple of hundred gallons of JP4 jet fuel, with the turbines still running. The rest of the crew got out without a scratch! What a great landing by Dennis Clancy. All of that happened three days before my 21st birthday. I wasn’t even old enough to buy a beer back in the States.”

Dave went back home to Michigan where he lived for the next 45 years. He earned a degree in business management from Grand Rapids College and worked as a Quality Engineer for Trans-Matic Corporation until he retired. As with many veterans, the trauma of war was not left behind in Vietnam. Dave was married and divorced a couple of times before he decided to move south to Alabama, near his best friend Glynn Broom.

When Glynn returned to Alabama, he returned to his old job of operating heavy equipment for his dad along with his brother, Reese. Glynn also worked with David Walker on his commercial snapper-fishing boat out of Destin, Florida. The trauma of Vietnam also affected Glynn and he has been married and divorced. Glynn currently lives near Loango.

In recalling his move south in 2015, Dave Burns said, “ I was shoveling snow and ice from my driveway when I thought I was having a heart event. I decided right then that I didn’t want to die there at the end of my driveway in six feet of snow. So, I called my friend Glynn Broom and headed south. I knew I would have a friend and warm weather. I found a nice little 16- acre place about two miles from Glynn. I owe a special thanks to Mr. Fred Hartin and his family and their church family at Pressly ARP Presbyterian Church. They have adopted me into a family of God.”

The author thanks these two Vietnam veterans, Dave Burns and Glynn Broom, for sharing their story. Our country also thanks them for their service.