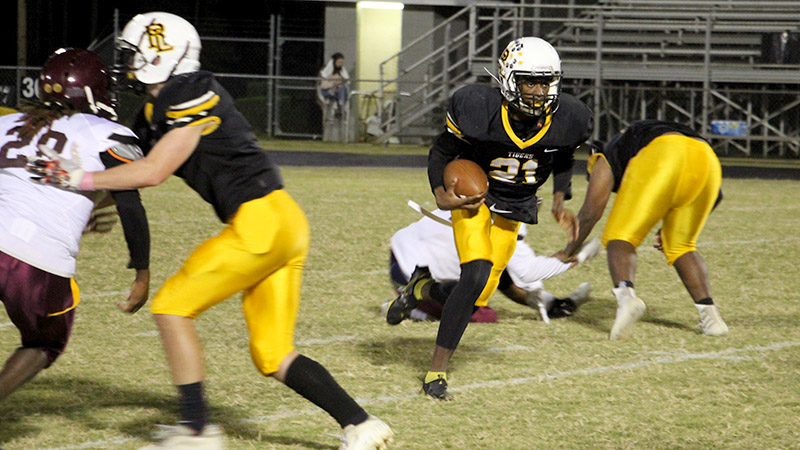 The Red Level Tigers ended the 2021 season on a high note, trouncing the J.F. Shields Panthers, 49-6, for a homecoming victory.

The Tigers quickly jumped on top of the Panthers. After the defense held J.F. Shields on its first possession, the snap on the punt flew over the punter’s head, setting the Tigers up with great field position at the 7-yard line. Quarterback Javen Poindexter took it from there, running the ball into the end zone on the first play. Kennith Huckabaa’s extra point lifted the Tigers to a 7-0 lead.

The Tigers struck again with an onside kick that was recovered at the 50-yard line. A 43-yard pass from Poindexter to Malikye Wright once again put Red Level in scoring position at the 7. After a sack set the Tigers back, Poindexter found Dominic Williams for an 8-yard touchdown pass, making the score 14-0.

J.F. Shields continued to have troubles with snaps, and another on fourth down once again made things a bit easier for the Tigers as they took control at the 13-yard line. After a bad snap of their own backed Red Level up, they ultimately found the end zone on a 19-yard pass from Poindexter to Williams. A 2-point try was no good, but the Tigers held a 20-0 lead going into the second quarter.

Things went from bad to worse for J.F. Shields in the second. In a span of just over 1:30, the Tigers put 14 points on the board, beginning with a 4-yard run by Poindexter. Another high snap by the Panthers led to a safety and on the free kick, Wright returned it about 60 yards for the touchdown, lifting the Tigers to a 34-0 lead with 9 minutes to go in the first half.

The Tigers tacked on one more later in the fourth when Zan Meyon Calloway rumbled 16 yards for a touchdown. Huckabaa weaved and dodged just about every Panther defender to add a 2-point conversion, making the halftime score, 42-0.

The teams went to a running clock in the second half and the Tigers saw a lot of younger players take the field.

Both teams scored in the half. The Tigers scored early in fourth when Wright returned an interception to make the score 49-0. J.F. Shields put their only points on the board as time expired, leading to the final of 49-6.