Opp advances to second round with win over Reeltown, 35-6 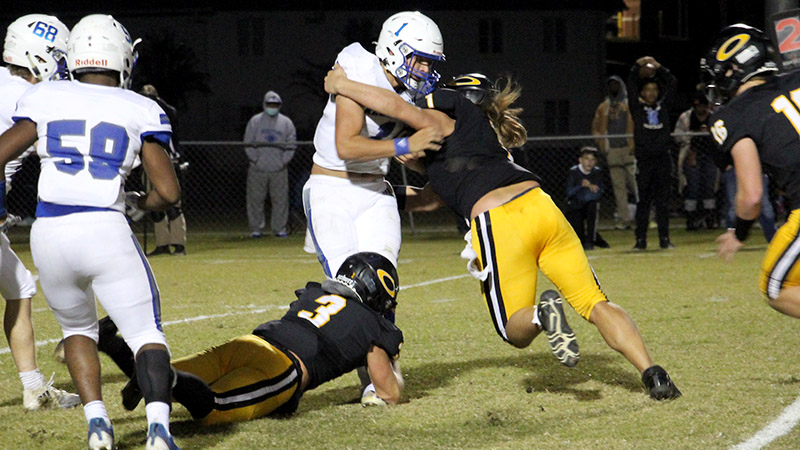 Gray Jennings (3) and Cole Jennings (1) get to the Reeltown quarterback.

The Opp Bobcats slashed through the Reeltown Rebels to claim a first-round playoff victory, 35-6.

Opp got things going in a hurry, taking the first possession 57 yards, capped off with a 3-yard touchdown run by quarterback Gray Jennings.

After forcing the Rebels to punt, Opp took only four plays to increase its lead when Terry Davis bulldozed over a few Reeltown defenders from seven yards out and into the end zone. Jackson Pierce tacked on the extra point to give the Bobcats a 14-0 edge.

Reeltown appeared to be warming up on its next possession. On third and 10, Gabe Bryant found Dakarian Hughley for what would have been a 73-yard touchddown, but a targeting penalty against the Rebels back them up the Opp 45. Reeltown worked their way to the 19 and on a second-and-13 play, Bryant was pushed out of the pocket and scrambled until he found Sedarico Brooks wide open in the end zone. A 2-point conversion failed.

From there it was all Opp. On their next possession, the Bobcats drove the ball 80 yards. Davis found a big hole for an 18-yard touchdown run, lifting Opp to a 21-6 halftime lead.

The Opp defense started the third quarter with an interception by Robbie Gafford. A reverse to ZaZa Lindsey picked up 16 yards for the Bobcats and a pass from Jennings to Pierce picked up 17 yards. Davis had a huge run to put the Bobcats at the 12 and Jennings capped off the drive with a 6-yard run. Pierce’s PAT made the score 28-6 midway through the third.

Opp capped off the scoring later in the third when Jennings found Jabarri Hill for a 10-yard touchdown pass.

Davis had a great night for the Bobcats, collecting 177 yards and two touchdowns on 17 carries. Jennings went 13 of 23 for 172 yards and a touchdown passing and he gained 57 yards on the ground with another touchdown. Lindsey was the leading receiver with 67 yards on four catches.

Cole Jennings led the defense with 10 tackles, including four for a loss and two sacks. Gafford and Will Spurlin each recorded interceptions.

The victory sets Opp up with a second-round matchup against T.R. Miller (9-2).