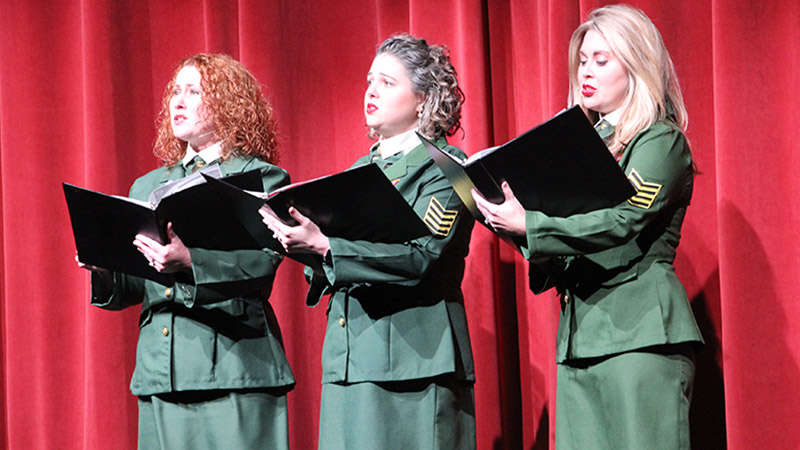 The Andy Sisters (Hannah Cross, Katie King and Olivia Ennis) perform “Where Have All the Flowers Gone.”

The event, held at the Andalusia High School auditorium, was a tribute to all veterans with a focus on those from the Vietnam era. The event included an opening video of local veterans and family members speaking on their experiences. Circuit Court Judge Ben Bowden, the current CVF president, served as the master of ceremonies. 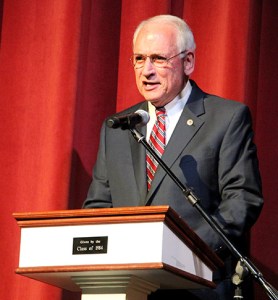 Keynote speaker for the event was Dr. Jack Hawkins Jr., chancellor of Troy University and was a commissioned lieutenant in the U.S. Marine Corps, serving as a platoon leader in Vietnam.

Keynote speaker for the event was Dr. Jack Hawkins Jr., chancellor of Troy University and a commissioned lieutenant in the U.S. Marine Corp, serving as a platoon leader in Vietnam. He was introduced by Andalusia Mayor Earl Johnson.

“It is truly an honor to be with veterans and those who love and support our veterans,” Hawkins said. “The greatest privilege on Earth is being born an American citizen. If you don’t believe it, just look to south of the border to see all of those people wanting to come here. We don’t see thousands of people trying to leave, we see them trying to come.

Hawkins spoke about his return to Vietnam after Troy University established programs there in the 2000s.

“I never thought I would want to go back to Vietnam. Troy had established academic programs in three different cities in Vietnam. We became the first American university to award a bachelor’s degree in Vietnam in 2008 in Hanoi.

“I had not told anyone I had been there during the war. During that graduation ceremony, the young man who introduced me demonstrated the power of the internet and said in his introduction that he wanted to welcome be ‘back’ to Vietnam. I knew then I was in trouble. As I looked into the audience I saw an older gentleman about my age, the difference being I was wearing a cardinal robe and he wore a uniform. His chest was full of medals and we stared at each other for just a moment and I wondered ‘have I seen you before.’ At the end of the ceremony, he was all but running down the aisle … I wasn’t sure if he wanted to tackle me or what. He actually wanted to be there so we could have a photograph. He was a colonel in the North Vietnamese army. His grand-nephew was graduating that afternoon from Troy. I knew then it was a new day. Since that time we have graduated well over 1,000 Vietnamese in all parts of that country. Not one of them wanted to study socialism or communism … they want to learn the American way. In the long run, we may win that war through economics,” Hawkins said.

He went on to speak about the commitment and sacrifice needed to engage enemies in combat.

“Those who stood up today, served and gone into combat, you know that war is brutal. It’s not at all like the movies project. Recently, a Marine from World War II said, ‘unless you are willing to be as brutal as your enemy, do not engage him in conflict because he will defeat you. We fought the Japanese on the beaches with bullets, bayonets and flamethrowers. In Germany, our pilots burned down their cities. It took two atom bombs to bring the Japanese to their knees. But, if that is what it took to win, we were willing to do it. Today, I wonder if we have the leadership, the resolve and the determination to do it again. Or, are we too afraid of hurting someone’s feelings as we worry about gender equity and political correctness.’ I think he raises very good questions considering today’s environment. We need strong leaders who recognize that war is brutal and freedom is not free.”

He also highlighted two Alabama veterans, beginning with Dr. Eugene Sledge who fought in World War and was a biology professor at what is now Montevallo University. 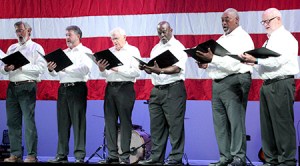 The Andalusia Men’s Chorus perform a medley of service hymns.

“We encouraged him to write his memoirs and he did, publishing a book, “With the Old Breed,” in 1981. That book became the handbook for combat Marines in World War II and was the backbone of the extraordinary documentary, ‘The Pacific.’ Dr. Sledge was an ordinary man, like so many of us. But, he displayed extraordinary courage under extraordinary circumstances.”

Another hero he spoke about was Command Sgt. Major Bennie Adkins. After 24 years of service he returned to Alabama and completed three degrees at Troy University.

“His story is remarkable. In March of 1966, in a remote camp in Vietnam, at the mouth of the Ho Chi Minh trail, he was with 24 Americans and a comparable amount of South Vietnamese soldiers. They became surrounded by thousands of North Vietnam army regulars. Over a three-day period, Atkins fought with mortars, machine guns, hand grenades, single-handedly being credited with taking out 175 of the enemy that  had surrounded him. Even after taking 18 wounds, he continued to fight. The VMA kept coming and ultimately overran their camp. He and a small group of Americans — they left no one behind — moved into the edge of the jungle, carrying their wounded. They evaded the enemy, but soon they were surrounded again. As it was growing dark, they saw eyes circling them. It was the eyes of a tiger. Later Bennie said the only thing the VMA feared more than Americans was that tiger. The VMA broke contact and soon the tiger — attracted to their blood-soaked uniforms — also left them alone.

Adkins was awarded the Congressional Medal of Honor by President Barack Obama in 2014.

“Gene Sledge, Bennie Adkins, and others like them show a devotion that was extraordinary. They also showed the power of servant leadership,” Hawkins said. “The greatness of America is reflected in the heart of patriots who served — and are serving — this nation.” 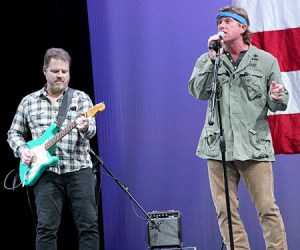 The Three Notch Ramblers perform “Better Run Through the Jungle.”

The Andalusia Men’s Chorus is directed by Dwight Crigger and they were accompanied by Sonya Crigger.

The director of the program was Amy Dugger. Jerry Wishum was the technical director and Steve French worked audio and lighting. 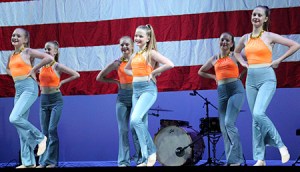 Members of the Andalusia Ballet perform to “I Feel Good.”

Following the program, the audience was invited to city hall for the opening reception of a Vietnam Veterans exhibit, which is now open to the public during regular business hours.

Other planned events for Veterans Day include a dedication ceremony on Wednesday, 10 a.m., at the South Alabama Regional Airport where the heliport there will be dedicated in honor of the late Lt. John B. Givhan, a veteran of Vietnam. The CVF in partnership with the Friends of Army Aviation will have two UH-1 helicopters at the airport and will be available for rides from 9 a.m. until sunset. Tickets are available at friendsofarmyaviation.org.

On Thursday there will be a Veterans Day parade beginning at 9 a.m. All veterans are invited to ride on floats that are prepared for them. To ride on a float, veterans are asked to arrive at the First Baptist Church parking lot at 8:30 a.m.

Following the parade, a Veterans Day service will be held at the Covington Veterans Memorial, located behind city hall. Retired educator and Vietnam veteran Sam Nichols, an Andalusia native, will be the guest speaker. A reception for veterans will follow at city hall.