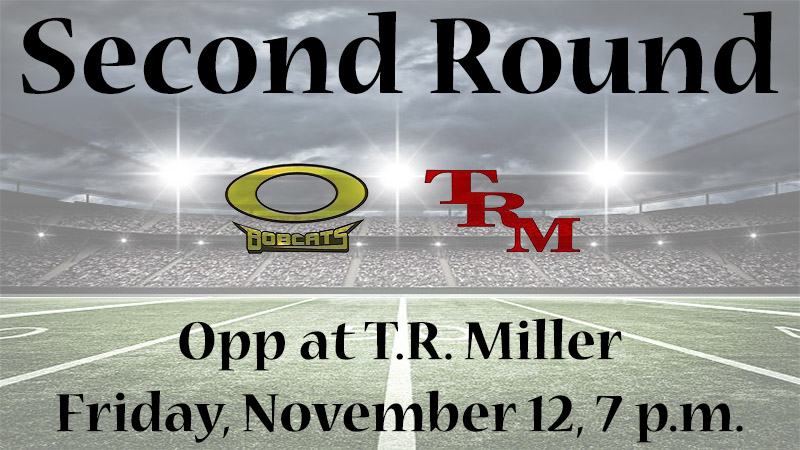 The Bobcats downed Reeltown at home last time out in the first round, 35-6. The Tigers struggled on offense but held off Hale County, 20-7.

“Anytime you win in the playoffs, it’s a big win. I thought our football team played well, and we showed a lot of improvement. I’m proud of both our coaches and players. I felt like we did a great job of calling the game from a coach’s standpoint,” Head Coach Mike Dubose said. “I thought we played well in all three phases of the game.”

He feels like Opp will have another big challenge this week.

“When you think about the playoffs especially in 3A football, one of the first names you think of is T.R. Miller. They have won state championships and competed for a long time. They have a great team and know what to expect. They’re very well-coached and physical up front at the line of scrimmage on offense and defense. They have a powerful running back about 230, 235. They’re the type of team you expect to play in the second round of the playoffs. They’re very, very good,” Dubose said.

The two teams are no stranger to one another as this contest marks the 35th meeting overall and the first time in the playoffs. T.R. Miller has a 20-14 lead in the series, but Opp has won three of its last five trips to Brewton including two straight.

Each team advanced to the second round last season, but neither side advanced. Opp dropped a tough outing at Montgomery Catholic, 38-0. T.R. Miller fell just short in a close game at home against Thomasville, 28-21.

The winner of this game advances to the quarterfinals against Montgomery Academy or Trinity next week.

“We understand it is a challenge, and that challenge is nothing more than an opportunity for us to play. We will have to come out ready to compete against a great football team,” Dubose said.

Andalusia preps for second round against Demopolis