SARA Heliport named in honor of Lt. John B. Givhan 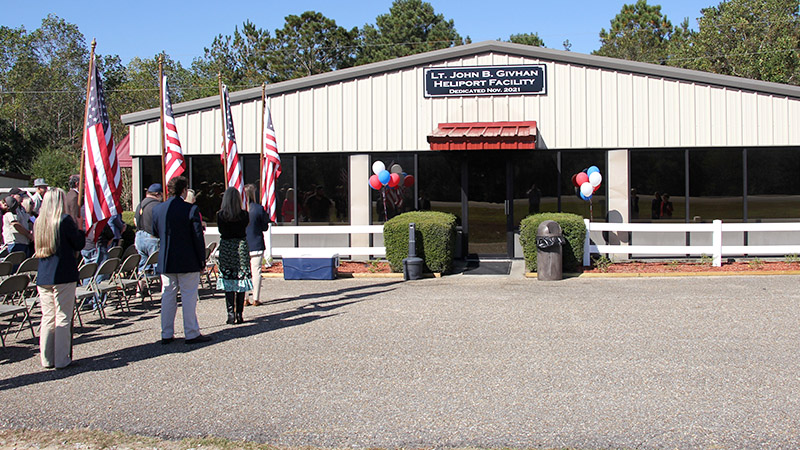 A sign naming the SARA heliport facility for Lt. John B. Givhan was unveiled Wednesday.

It was a bittersweet ceremony Thursday as South Alabama Regional Airport officially dedicated its heliport facility for local veteran and beloved airport supporter, the late Lt. John B. Givhan.

SARA Director Jed Blackwell opened the event with a brief history about the airport and his own personal remarks about Givhan.

“John and I spent many, many hours together here at the airport. He was an advocate for this airport and for veterans. He was a true friend,” Blackwell said. “We feel that with all he has given to this airport, our community, and to our country, this is the best way we can honor him.” 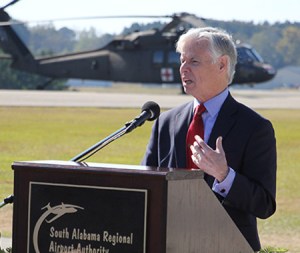 “There was nothing about John that he was more passionate about than the armed forces of this country. There was nothing he was prouder of than to have been an Army aviator and combat veteran. Although he was born in Dallas County, Andalusia became his beloved home. This is the place and this is the way to be remembered that would mean the most to him,” W. Givhan said.

Givhan said he was aware, even as a child, “that John had left and gone off to Vietnam” where he flew more than 250 combat missions.

“This is the early 60s, before the massive buildup after the Gulf of Tonkin incident in 1964,” he said. “His families would share the letters he wrote. I remember hearing them read. All of that was cut short when he was severely wounded by a missile that hit the lower part of his right leg.”

“He almost bled to death,” Walter Givhan said. “He would have died if his co-pilot, Bo Thompson, had not thought to put a belt around his leg.”

Givhan, who was 6 at the time, said the stories made the war real to him.

“I remember how joyful it was when John came home to Alabama,” he said.

Givhan said that for many veterans, war never goes away.

“They called it shell-shock in WWI. Now it is known as PTSD. Many of us who served in combat experiences have PTSD to some degree. It varies, according to trauma experiences.

“John felt it acutely,” Givhan said. “Part of his therapy was writing a memoir. It’s good to get the traumas out.”

Givhan said his cousin connected to other veterans, and acted as a mentor to those serving in the military.

“When I came home from my first combat tour, I remember talking to him,” he said. “I give credit to him and to others that the lessons we learned from their war helped us.”

John Givhan also organized efforts to support soldiers in combat and often shipped care packages.
“I was a hero to all of my unit for all the things we received, including some pound cakes from Andalusia,” he said of his time in Desert Shield and Desert Storm. “It was John’s passion for caring for veterans that drove him. I know how pleased and proud he would be to be remembered in the way you remember him today.”

Several family members spoke during the event, including his son, John Givhan.

“I know all of you meant a lot to my father. My dad spent a lot of his time here. He enjoyed thoroughly speaking with the young pilots who would come in and mentoring them. He had so many good times out here,” J. Givhan said.

Givhan’s daughter, Endsley Bolen, said her father was always there for his family as well as many others.

“The word the comes to mind is comfort. During some troubled years of my own, my dad brought me to the heliport. He didn’t know what else to do for his daughter, he just wanted to provide some comfort. Daddy found comfort in this place. He wanted to comfort those serving who walked into this place. He wanted them all to know, that he knew, that the war did not end upon the return home,” Bolen said.

“My family has lost a lot this past year. All of your prayers, texts, calls, visits have met a lot to us.

“Growing up, my parents split up and my mom brought us here to Smalltown, USA. The father figure in our house was my grandfather. He taught me lessons on our car rides, made me breakfast … people say I have a lot of wisdom for my age, but that’s just him talking through me. I loved my grandfather and he loved every one of you, and this heliport,” J. Bolen said.

The audience also held a moment of silence to remember Givhan’s wife, Martha Givhan, who passed away recently.

After the speakers and during a performance of “God Bless the USA,” by Phillip McClung and Scott Rogers, the cover was dropped on the official sign for the “Lt. John B. Givhan Heliport Facility.”