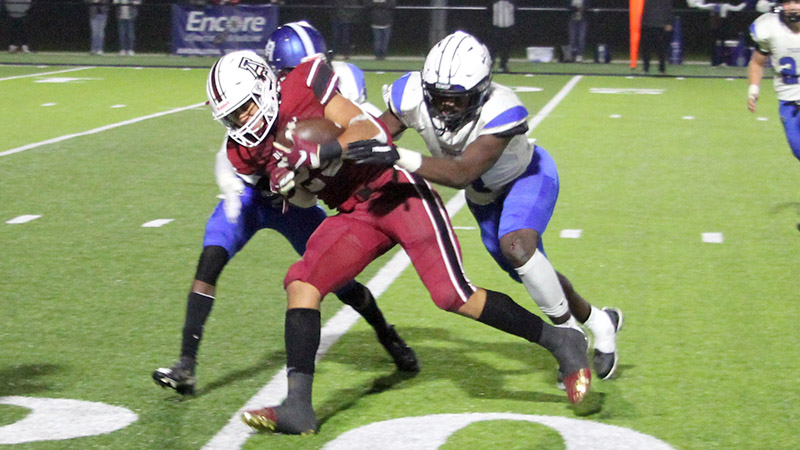 Zavier Hamilton works for extra yardage after a 14-yard reception.

The Andalusia Bulldogs proved to be too much for the Demopolis Tigers in the second round of the 5A playoffs Friday night, running their way to a 48-26 victory and securing a spot in next week’s quarterfinals.

The running game was the big difference for the Bulldogs, finishing with 308 on the ground and helping the team to a big time-of-possession advantage over a Demopolis team that can score quickly when given the opportunity.

“We’re pretty good up front and we have two good runningbacks,” said AHS Head Coach Trent Taylor. “They played their tail off tonight. I’m really proud of our team. We played very well on both sides of the ball.”

Demopolis got the scoring starting with a strike on their first possession as Drew Seymore found Kentrell Adams on a crossing route that went 69 yards to the end zone. The Tigers missed the extra point, but were up 6-0 early in the first.

After each team exchanged punts, Andalusia took control at their own 40-yard line and from there gave the Tigers a steady diet of J’Marrion Burnette and Omare Latimer. The Bulldogs went to one of the two runningbacks every play of an 11-play drive that ended with a 21-yard touchdown for Latimer. Cole Morgan’s point-after put Andalusia on top, 7-6.

With 1 minute to go in the first quarter, Andalusia began a drive from close to midfield. The first handoff went to Burnette who exploded for a 33-yard gain to the Tiger 20-yard line. Two plays later, now in the second quarter, Burnette capped off the drive with a 3-yard run into the end zone, extending the Bulldog lead to 14-6.

Demopolis battled right back, answering with an 81-yard drive of their own. The Tigers mixed up the run and pass, as Seymore had two key passes for a total of 54 yards and Craig Nichols showed some muscle in the running game, picking up 26 yards on the drive. The drive ended with a 2-yard run by Matthew Witherspoon. The 2-point attempt to tie the game failed as Andalusia maintained a 2-point edge, 14-12.

Andalusia got off to a great start on their next possession as Zavier Hamilton returned the kickoff to midfield. From there, the Bulldogs went right back to what was working, handing the ball to Burnette and Latimer. From the 23, it was Latimer who found running room around the right edge and into the endzone. The point-after attempt failed, but Andalusia increased its lead to 20-12, which would be the score at the half.

The Bulldogs took the kickoff to start the second half and went to the air. Aiden Amis hit Lucas Jordan for a big gain of 40 yards. A few plays later, on third-and-seven, Amis threw a strike to Hamilton for 14 yards and a touchdown. Morgan’s point-after extended the Bulldog lead to 27-12.

Penalties and turnovers haunted the Tigers. After driving to the Bulldog 38, Hamilton forced a fumble that was picked up by Latimer and returned for another Andalusia score for a commanding 34-12 lead.

Demopolis was not ready to give up and proceeded to score on their next possession, going 65 yards and ending with a 4-yard touchdown by Witherspoon, making the score 34-18.

The Tigers continued to have trouble stopping the tandem of Latimer and Burnette. The two combined on the next possession for 50 yards. A 9-yard run by Burnette lifted the Bulldogs to a 41-18 lead with only 17 seconds to go in the third.

Both teams tacked on touchdowns in the fourth quarter, but it is Andalusia that advances to the quarterfinals with the 48-26 victory.

Demopolis led Andalusia in total offense, 423-373. But, the Bulldogs held a big advantage in time of possession and in running yards, with a total of 308. Demopolis also gave up three turnovers and had 13 penalties.

With the win, the Bulldogs will host UMS-Wright next week in the quarterfinals. UMS defeated Greenville 14-12 in its second-round contest.