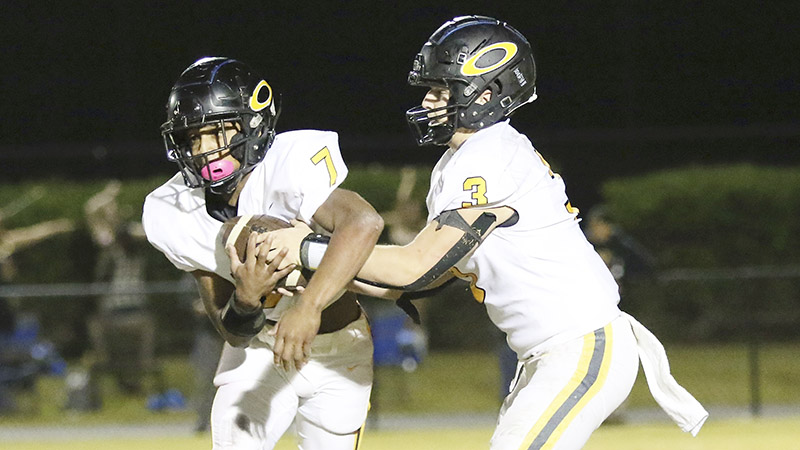 Opp was unable to recover from a 21-point deficit and ended the season with a 35-14 second-round loss at T.R. Miller Friday night.

Miller (10-2) started the contest at the 30. After a false start, Gage Mims moved the chains with a 6-yard run. Opp (9-3) forced a fourth down, but D.J. Fountain used a 19-yard run on a fake punt into visiting territory. Three plays later, Myles Johnson added another first down with a 7-yard run. Fountain ended the 14-play opening drive with a 4-yard touchdown scamper. The PAT was good for a 7-0 lead with 4:23 left in the first.

The Bobcats set up shop at their own 43 as Terry Davis had a 4-yard run on first down. Gray Jennings connected with ZaZa Lindsey for 16 yards, but it was not enough to move the chains after a holding call. The Tigers took over following a punt but went three and out. Jennings found Lindsey again for an 11-yard pickup after one quarter. TRM fought back and forced a pair of incompletions to force another punt by OHS and regained possession early in the second quarter.

Marshall Lovelace had a 5-yard gain on the initial play of the next drive before Miller Hart earned a first down. Hart then hit Trent Cooper in stride for a 64-yard touchdown with 9:29 left until halftime. Miller doubled its lead to 14-0 after a true PAT. A huge sack and two costly penalties proved to be Opp’s undoing on the next series. A shanked punt allowed the Tigers to start with outstanding field position, but the Bobcats gained some momentum with a crucial defensive stand.

Davis converted a clutch third down and darted 14 yards into the red zone. After a 5-yard pass by Jennings, Davis appeared to score but fumbled into the end zone giving TRM the ball at the 20. OHS took over after another three and out as the score remained 14-0 at halftime.

Davis and Jennings opened the second half with consecutive first down runs until the drive stalled. Despite a booming punt from Opp, Hart found Kelley open for a 95-yard touchdown to extend the Miller lead to 21-0. Robbie Gafford then delivered a huge 29-yard third down grab. Jennings put the Bobcats on the board with a 1-yard touchdown run and take the score to 21-7. The Tigers answered right back when Hart threw a 45-yard touchdown pass to Cooper for a 28-7 lead. Jabarri Hill kept the next drive alive with a 45-yard reception on third and long.

Jennings added his second 1-yard touchdown and drew OHS within 28-14 after three quarters. TRM used its ground game in the fourth as Fountain closed the scoring with a 9-yard touchdown run. Davis rumbled 20 yards for another first down, but Cooper intercepted the ball. Neither side posed a threat the rest of the way.

Jennings finished 12-of-27 passing for 179 yards and also rushed for 13 yards. Davis had 19 carries for 142 yards. Hill added 2 receptions for 48 yards while Lindsey grabbed 40 yards through the air. Cole Jennings and Colby Ballard led the Opp defense with 9 tackles each.