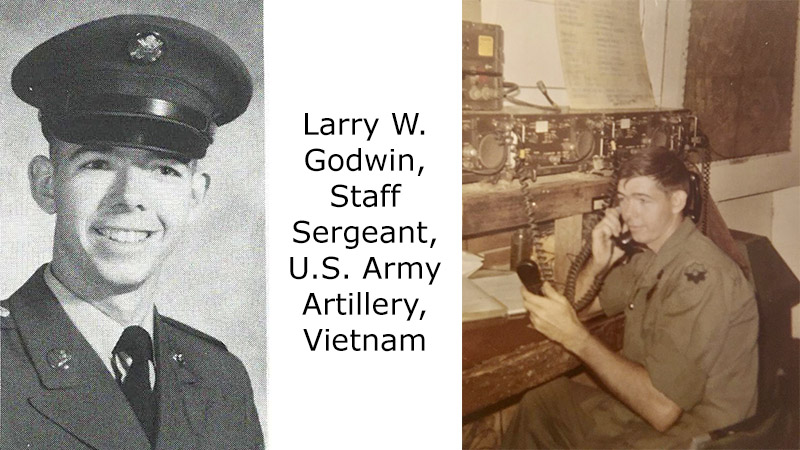 Larry W. Godwin agreed to share his story, not so much to tell about what happened to him in Vietnam but to share the feelings of loneliness and danger faced by young men that were sent halfway around the world to a strange country called Vietnam. Larry recalled that those challenges began on the plane as they departed California, “I was listening to ‘Leaving on a Jet Plane’ by Peter, Paul and Mary and wondering if I’d ever return.”

Larry Wayne Godwin was born on February 7, 1948, in Andalusia, Alabama, but grew up in the nearby Mobley Creek community. His parents were Thadeus and Hazel Godwin. Larry worked several jobs growing up, including work on the family farm, construction work, one summer at the Alatex, Ray Lewis Salvage yard and he helped open the new Roses department store at Covington Mall. He attended several schools in the county before transferring to Andalusia High School where he graduated in 1966. He attended Auburn University and Jefferson Davis Junior College before enlisting in the Army in February 1969 under the delayed enlistment program.

Larry reported for basic training in March 1969 at Fort Polk, Louisiana. After basic, he was accepted for flight training at Fort Wolters, Texas. In Larry’s words, “After a couple of months, they convinced me that I could not fly a helicopter and I was sent to Fort Sill, Oklahoma, for Artillery Fire Direction Control Training.” Upon completion of training at Fort Sill, he was deployed to Vietnam on November 20, 1969.

One of Larry’s first memories after arrival was Thanksgiving dinner, “I remember the turkey and dressing but it wasn’t quite the same with my M-16 hanging on the back of my chair. It reminded me of home and but I wasn’t enjoying my Mom’s turnip greens and cornbread.”

Larry was assigned to “Charlie” Battery, 2nd Battalion, 4th Field Artillery located at Tan Tru, about 50 miles south of Saigon. Their 105 mm howitzer battery supported the 3rd Brigade of the 9th Infantry Division. Larry worked as the chart operator, the radio operator and as the computer operator. He manually computed firing data using the FADAC [Field Artillery Digital Computer]. Their howitzer was very mobile and Larry recalled firing from the side of a road, then being air-lifted to the Plain of Reeds [in the Mekong Delta]. At times, their gun was mounted on a barge as part of the Mobile Riverine force that could navigate up and down rivers to support ground operations.

There was always anxiety, whether you were the first one to hit the ground in an air mobile operation or sitting on a barge in a Vietnam river with your artillery crew and a platoon of infantry. One incident that Larry remembered happened one night while they were firing from a barge in the river, “One of our night lookouts spotted an object that appeared to be floating toward our barge. He immediately fired his grenade launcher and the exploding grenade set off a large secondary explosion. After that happened, we began receiving small arms fire from across the river. We returned fire including bee hive rounds from our howitzer.

Bee Hive rounds were artillery shells that contained about 8,000 small, metal flechettes. The Bee Hive rounds were often used over a known enemy area where visibility was limited because of dense vegetation.” Larry continued, “We never knew what was next and we had to be ready for anything. I was fortunate that the good Lord was looking out for us.” Larry had made PFC by November 1969 and all the way to Spec 5 [Sergeant] by March 1970.

Larry recalled that the hardest part of his tour happened on May 7, 1970, “I was about four and a half miles from the Cambodian border, listening to an air mobile operation on the radio as half of our battery was being air-lifted to the Parrot’s Beak area in Cambodia when I received a call that my father had died.” His father had died of a heart attack while at work at the Alatex and Larry was given emergency leave to go home for the funeral. On the way home, he thought about his dad and how much he would miss his letters from home.

Returning to Vietnam after the funeral was extremely difficult for Larry but he said, “I hated the thought of my mother being alone, but I had made a commitment and I was going to see it through.”

Larry returned to Vietnam in June 1970 and in August, was assigned to “Charlie” Battery, 2nd Battalion, 7th Field Artillery unit. A few months later, he was sent home where he received an honorable discharge on November 4, 1970. Larry was awarded the Defense Service Medal, Vietnam Service Medal, Vietnam Campaign Medal, Army Commendation Medal and the Bronze Star.

After returning home, Larry recalled, “The first thing I did when I arrived in Andalusia was to go by Henry Wiggins’ barber shop and get a haircut!” Not long after that, Larry proposed to Patricia [Patty] DeLoach on New Year’s Eve and they were married March 20, 1971.

Once home, Larry ran into a friend, SFC Byram Lambert, a member of the local Alabama National Guard unit. He talked Larry into joining the unit, the Headquarters Battery, 1st Battalion, 117th Field Artillery. Larry remained in the Guard for about 30 months, leaving as a Staff Sergeant.

Larry reentered Auburn University in 1971 and earned his degree in accounting in 1973. After the birth of their daughter, Laura, they moved to South Carolina where Larry worked as an internal auditor for Spring Mills. Later, they moved to Florida where Larry worked as an accountant with the State. That job led to his career in Medicare and Medicaid Reimbursement with Community Health Systems and Hospital Corporation of America [HCA]. Before retiring, Larry spent the last 13 years as Director of Reimbursement at Tulane University Hospital in New Orleans, an HCA facility.

Larry and Patty Godwin currently live in Gulf Breeze, Florida. They are the proud grandparents of five grandchildren. Larry has two siblings, Rebecca Colvin [Charles], and Hilton [Sandra] Godwin. Like so many of our Vietnam Veterans, Larry suffers from the lasting effects of Agent Orange. He credits the Veterans Administration for helping him monitor his diabetes and kidney damage.

The author thanks Larry Godwin and his family for their help in telling his story.