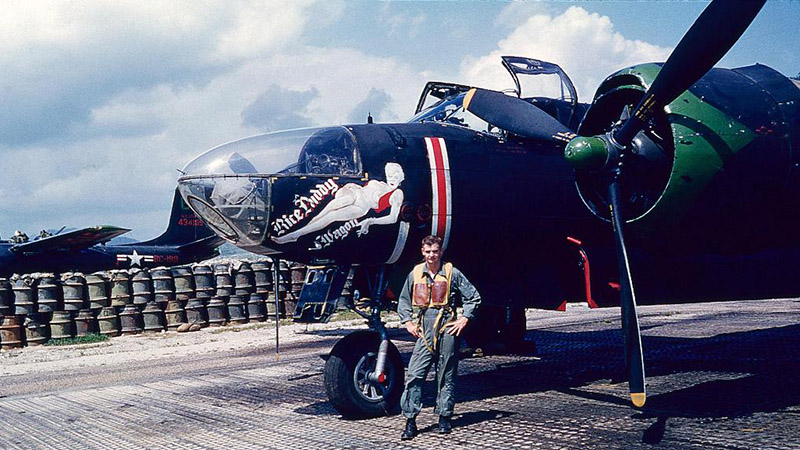 Air Force pilot Charles B. Mathews beside his B-26 bomber called "Rice Paddy Wagon" in Korea. [Photo: The Mathews family]

The author lost a friend and the nation lost a great patriot with the passing of Charles B. Mathews, Major U.S. Air Force [Ret.] on October 11, 2021. Charlie was a native of Andalusia, Alabama, and the son of Major Don S. Mathews, a WW II and Korean War veteran.

Charlie entered Alabama Polytechnic Institute [now Auburn University] in the fall and graduated with a degree in industrial management in 1952. He was a member of the Air Force ROTC Unit, the Arnold Air Society and the military honorary, Scabbard and Blade. Charlie was commissioned a 2nd Lieutenant upon graduation. He was accepted for flight training and reported to Stallings Air Base near Kinston, North Carolina. After receiving his pilot’s wings in 1953, he deployed to Japan and Korea with the 34th Bombing Squadron.

Charlie flew B-26 bombers in Japan and Korea before returning to the States and transitioning to jet aircraft. He flew the B-57 bomber while stationed at Hurlburt Field, Florida, until he separated from the Air Force in 1956. He then joined the Alabama National Air Guard, flying the RF-84 Thunderjet for the next ten years before retiring from the Air Force Reserve at Duke Field, Florida. He returned to Auburn in 1956 and earned a degree in aeronautical engineering and then a master of science degree in aerospace engineering. While at Auburn, Charlie was elected to the honorary fraternities, Tau Beta Pi, Pi Tau Sigma and Pi Mu Epsilon. 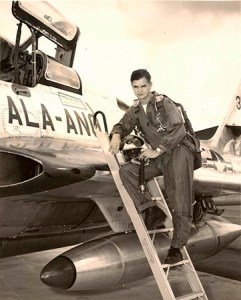 While still stationed at Hurlburt Field near Mary Esther, Florida, Charlie was introduced to the Foster family from Opp, Alabama, at their summer home by his Aunt Gladys Reid. Two and a half years later, he married their daughter Lynne. They would have celebrated their 64th anniversary on January 18, 2022.

Upon graduation from Auburn in 1962, Charlie started work as an engineer with the Air Force Armament Laboratory [later the Armament Directorate] at Eglin Air Force Base, Florida. He held various positions there until his retirement as technical director of the Weapons Flight Mechanics Division in 1994.

In 1978, Charlie was invited to participate in the NATO Advisory Group for Aerospace Research and Development lecture series on Missile Aerodynamics held in Ankara, Turkey; Rome, Italy; London, England and Brussels, Belgium.

In 1982, Charlie accepted the position of Head of Air Armaments for the NATO International Staff in Brussels, Belgium. Lynne said that when Charles first learned that the position would become available in 1981, he was told that it required the director to be fluent in French. She said that Charles studied French for a year and was selected over two other candidates.

The NATO staff included two retired generals, French General Francis Perrotte and Italian General Juan Carlo Ortenze, who also saw to the Mathews’ weekends and holidays, further touring Europe. The staff held one-week meetings throughout NATO countries every three months. Charlie and Lynne spent many holidays and weekends at the Perotte family home at Normandy. Charlie and Lynne lived in Brussels for five years until he returned to Eglin AFB in 1987.

Charlie and Lynne were very active in the Fort Walton Beach – Mary Esther, Florida, community and members of the St. Simon’s on the Sound Episcopal Church. Charlie was active in the Krewe of Bowlegs in Fort Walton and was First Mate in 1975-76. He loved fishing, hunting, skiing, traveling and boating in Santa Rosa Sound. Charlie also loved golf and once broke 70.

The author thanks Mrs. Lynne Mathews for her help in telling Charles Mathews’ story.