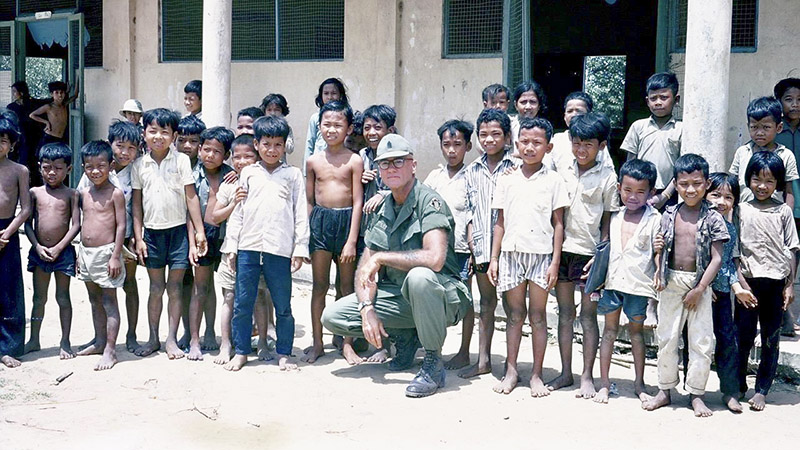 Courage and determination are hallmarks of heroes in war but those traits can also help a soldier overcome great personal battles of health as well. The story of Command Sergeant Major John A. Brown is a great example of the triumph of the human spirit in both areas.

After fighting in WW II, Brown returned home and was diagnosed with tuberculosis. After four years of treatment and the partial loss of one lung and the loss of several ribs, he successfully petitioned the Army for a return to active duty. He went on to complete two tours in Vietnam. 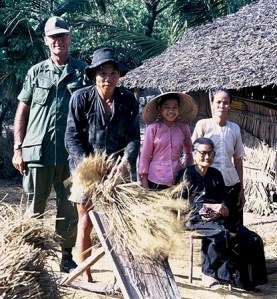 John Alvin Brown was born June 5, 1922, in Lockhart, Covington County, Alabama. His parents were John Alva and Tupsie Justice Brown. His mother died from probable tuberculosis in November and John was sent to live with his uncle’s family when he was about a year old. The Rufus Justice family lived in the Stanley community in Covington County, Alabama. They were sharecroppers who lived a very frugal and difficult life.

John grew up knowing hard work and only completed the eighth grade at the Stanley School. In 1940, he enlisted in the Army by telling them that he was 18, which was the legal age. By the time the Army learned his actual age, John was fighting with General Patton’s Army in North Africa. 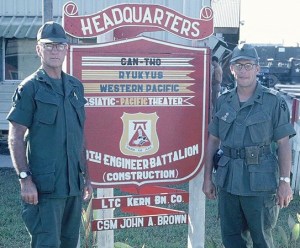 Brown with his CO, Ltc. Kern at the 69th Construction Battalion Headquarters, Can Tho, Vietnam. [Photo: Susan Brown Stewart]

Private John A. Brown trained at Camp Blanding, Florida, before being deployed with an armored unit to North Africa as a part of General George S. Patton’s Army. The U.S. invasion of North Africa called Operation Torch had ended in the defeat of the U.S. II Corps at the Battle of Kasserine Pass in February 1943. On March 8, General Patton was given command of II Corps. His energetic leadership resulted in the defeat of German Field Marshall Erwin Rommel’s Afrika Corps at the Battle of El Guettar in late March 1943. By May 1943, the Allies controlled all of North Africa, setting the stage for the invasion of Sicily.

Brown was a part of Patton’s 7th Army that invaded Sicily, Sardinia and Corsica. He participated in the invasion of Italy and the ensuing battles to the north including the Rome-Arno and Rhineland campaigns.

Near the end of the war, he was a guard at a prisoner-of-war camp near Marseille, France. Through his kind nature, Brown became friends with a German POW named Franz Weddemann, who was also an artist. Weddemann asked to see photos of John and his fiancée, Bonnie Parrish and made two charcoal and pencil sketches of them. He presented them to John in thanks for his friendship. Those sketches are shown with this article. 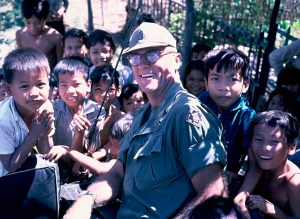 John A. Brown was a Sergeant by the time he returned to the States and was discharged after the war. He married Bonnie Mae Parrish on November 3, 1945, in Covington County, Alabama. They would have three children, Andre Brown of San Francisco, California; Rebecca Brown Dworkin of Medford, Oregon; and Susan Brown Stewart of Greenville, South Carolina.

John rejoined the Army and was sent to Fort Bliss, Texas. While there, he was diagnosed with tuberculosis in 1949. He was sent to the Fitzsimmons Army Medical Center at Aurora, Colorado, where he was treated from 1949-1953. During that time, he was only able to see his family through a window in the tuberculin ward. This was prior to the widespread use of sulfa drugs for treatment and John received surgery in an effort to save his life. The operation removed part of one lung and six ribs.

During the next three years, John underwent pulmonary rehabilitation while earning a high school diploma and attending business school. He petitioned the Army to return to active duty and in 1956 was accepted and assigned to a tank unit at Fort Knox, Kentucky. 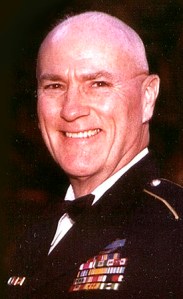 In 1959, John was sent to Butzbach, Germany. It was during this first tour in Germany that he started having vertigo and hearing problems. Even with his physical problems, he took his family to historical sites in Germany, Holland and Belgium, teaching them about the Battle of the Bulge and other war history. In 1962, he was sent back to the States and assigned to the 7th Cavalry Division stationed at Fort Benning, Georgia. John recalled that his colonel had the troops march five miles daily in full combat gear. The colonel explained that while fighting in Korea, his troops had been overtaken and slaughtered because they couldn’t outrun the Chinese. John remained there until 1965 when he was assigned to the Army’s 2nd Armor Battalion in Erlangen, Germany.

During his second tour in Germany, John was promoted to Command Sergeant Major. Still suffering from what would later be diagnosed as Meniere’s disease, he traveled with his family through Italy, Austria and Switzerland. He remained in Germany until 1968 when he was sent to Fort Hood, Texas.

John was assigned to the 35th Armored Division, also known as “Hell on Wheels” division. He spent 10 months at Fort Hood prior to his first deployment to Vietnam in June 1969.

On his first Vietnam tour, John was assigned to the 1st Air Cavalry Division. He flew missions as a Crew Chief and as a door gunner. John related one experience from July 1969. He had been watching the moon landing on TV when his compound was attacked with mortars and rockets. John said that he took cover under a table so that he could see the landing. In the fall of 1969, he was returned to the States because of his wife’s cancer diagnosis. She was successfully treated at Walter Reed Army Medical Center in Washington, DC. The family at that time made their home in Columbus, Georgia.

After six months, John returned to Vietnam for his second tour. This time he was assigned to the Army Corps of Engineers, 69th Construction Battalion, which built everything from runways to roads and bridges. Wherever he went, John made friends with all the village children and “mama-sans” who worked at the compounds and always handed-out candy. John’s friendly demeanor and gift of candy earned him the nickname The Candy Man.

John returned to the States in 1971 and was assigned to Redstone Arsenal at Huntsville, Alabama. He commuted from his home in Columbus, Georgia. John’s Meniere’s disease had gotten progressively worse despite several surgeries to correct it. During the last surgery, his middle and inner ear were removed and he was medically retired in 1974. His wife, Bonnie died that same year.

While visiting relatives at Gantt, Alabama, John met Olivia Hudson. They were married in 1975. She had a daughter, Susan Crosby from a previous marriage. John and Olivia moved to Gantt in 1977. 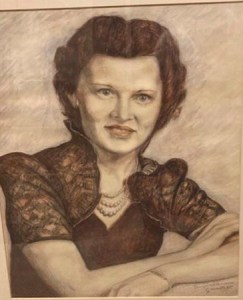 Two charcoal and pencil sketches made for Brown by a German POW in Marseille, France [1945].
John A. Brown and fiancee Bonnie Parrish [later the wife of Brown].
[Photo: Susan Brown Stewart] 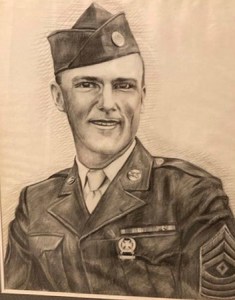 John had been diagnosed with colon cancer in 1976 which he felt was probably related to his exposure to Agent Orange in Vietnam. He was able to overcome the colon cancer and in the early 1980s, they moved to Niceville, Florida, where they resided until his death.

The author thanks Sergeant Major Brown’s children, Andre Brown and Susan Brown Stewart, and his longtime friend Presley Boswell for their assistance in preparing his story.