Pearl Harbor: 80 Years Ago – An Apology 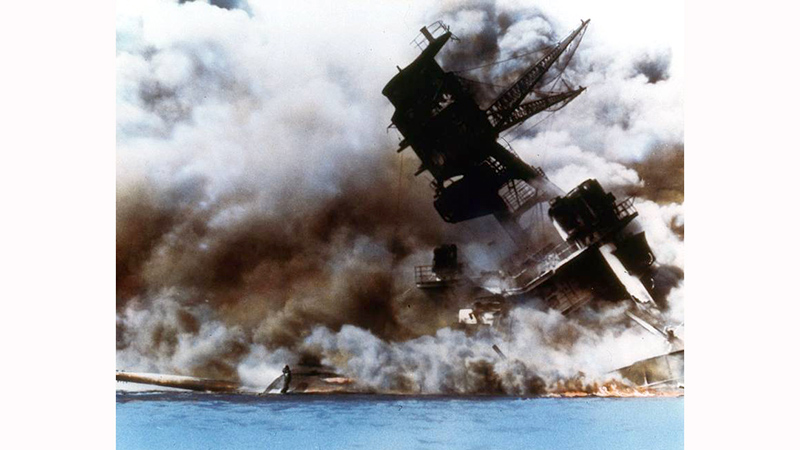 The USS Arizona [BB-39], on fire and sinking in the aftermath of the Japanese attack on Dec. 7, 1941. Andalusia, Alabama native, Chief Bo'suns Mate Comer Wilson died onboard the Arizona. [Photo: Time, Inc.]

This week’s column is dedicated to the more than 2,400 military personnel and civilians killed when Japan brutally and without warning, attacked Pearl Harbor and other military bases on the island of Oahu in the United States Territory of Hawaii on December 7, 1941.

December 7, 2021, marked the 80th anniversary of that attack by the Naval forces of Imperial Japan. The attack brought the United States into a world war that would cost the lives of another 300 thousand American servicemen before the war ended. As we commemorate that attack and memorialize those lost, let’s reflect upon their sacrifice and the sacrifices that were made during the next four years.

The Americans who fought in WW II have been called The Greatest Generation, an honor bestowed upon them by Tom Brokaw in his book of the same name. The Greatest Generation is a fitting description for those young men and women who committed their lives to fighting the totalitarian countries that began the war. Most Americans today cannot appreciate the sacrifices and commitment that was required to defeat Nazism and Fascism.

Our country was totally transformed with more than 16 million men and women joining our fighting forces and millions more women taking jobs with American industry to build the machines and provide the war materials that would win the war. We owe them our thanks, but more than that, we owe them an apology!

America of 1941 was a different nation. Our country was still recovering from the hardships of The Great Depression when the attack on Pearl Harbor took place. In the days after the attack, military recruiters were inundated with hundreds of thousands of young men, eager to join the fight to defeat an enemy that had dared attack their country. Most of them joined because they felt that it was their patriotic duty – after all, patriotism was still taught in our schools and the Pledge of Allegiance was still said every morning. Millions more were drafted

What happened during the next 80 years? The patriotism and sense of duty so evident in the America of 1941 is a lot scarcer in today’s America. Part of the blame for the change might be placed on The Greatest Generation itself. They had lived through hard times and wanted their children to have a better life. Many of them had grown up without enough food, without electricity and indoor plumbing and it was a natural desire to want their children to have a better life. So, what went wrong?

The author was six years old when WW II ended, old enough to remember some of those hard times. The baby-boomer generation that followed had a difficult time appreciating the sacrifices of their parents. Our country’s euphoria at the war’s end caused us to overlook many of our shortcomings as a grateful and free nation. We welcomed the sacrifices of black Americans during the war but treated them as second-class citizens afterwards. The post-war explosion of our standard of living was not shared equally.

Americans who were brought up during hard times greatly underestimated the valuable lessons they had learned. Surviving the 1920s and 1930s produced a resiliency and sense of gratitude that reinforced the backbone of our nation. Young men who left home for the military were often better fed [at least until C-rations] and they lived in a more structured environment. On the home front, those that remained behind tightened their belts and did without in order to do their part for the war effort.

What can we make of the changes in attitudes that took place in America after the war? The industrial might that defeated the Axis powers in WW II was changed over to produce consumer goods. Peacetime factories offered more and better paying jobs. A country that had endured both The Great Depression and a World War was ready to build homes, buy cars and purchase goods that were previously considered luxuries. Who can blame them?

As our country embraced the good times, we tended to forget the sacrifices that made all of that possible. Gratitude and thankfulness, though abundant in the beginning, became less so as the years rolled by. Religious belief and faith diminished, replaced by a more secular society.

Today’s schools, faced with a technology-oriented, fast-paced curriculum, teach less history than was taught 80 years ago – and there’s more to teach. What can be done to give students an education that emphasizes the debt owed to previous generations? That’s a lesson first taught in the Old Testament, Deuteronomy 6:11: [NIV]

“Houses filled with all kinds of good things you did not provide,

Our country owes much to previous generations but perhaps no generation is owed more than The Greatest Generation. They set the bar pretty high. If you’re lucky enough to have known many in that group, you will notice a common trait among most of them, a deep sense of humility that spurns personal recognition. Veterans from WW II felt they were only doing their duty. If there were heroes, they say, “It’s those that never returned.”

The Covington Veterans Foundation was formed to recognize and give voice to veterans from our area. Let us never forget their legacy of honor and sacrifice and may God bless and defend the United States of America!