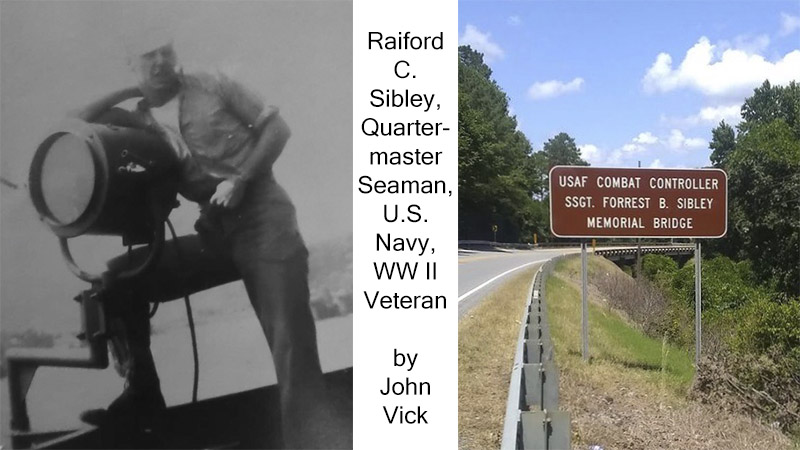 Pictured on the left is QMSN Ray Sibley, aboard the USS Caliente [AO-53] during WW II. [Photo: Buzz Sibley] Pictured on the right is Memorial Bridge honoring SSGT Forrest B. Sibley on US 231 in Blount County, Alabama. [Photo: The Anniston Star]

The author and Covington County lost a very special friend with the passing of Raiford [Ray] Sibley on December 11, 2021. Ray was an honored member of The Greatest Generation, having served in the Navy during WW II. He was a longtime resident of the Open Pond area in Covington County, Alabama.

Ray was an outdoor kid growing up and loved fishing and hunting ducks in the Atchafalaya Swamps. Ray graduated from Istrouma High School in Baton Rouge in 1944. His older brother, George, had been in combat in France at the time and had been seriously wounded. Ray said that he decided to enlist because of that. With his parent’s permission [since he was only 17 years old], Ray enlisted in the Navy and was sent to San Diego, California, for basic training. At “boot camp,” as basic training was called, Ray was given the nickname “Boot,” because he was from Louisiana, the state shaped like a boot. 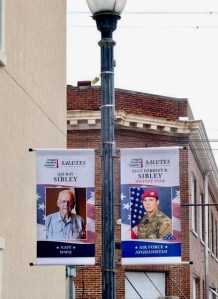 Shortly after completing basic, Ray found himself aboard the Navy troopship, USS Audubon [APA-149] en route to the Philippines. The Audubon took part in several battles including the Battle of Samar. After several months, Ray was transferred to the fast tanker, USS Caliente [AO-53].

Most Navy tankers were slow ships but the Caliente was one of the new fast tankers that were designed to keep up with Admiral Chester Nimitz’s fleet of fast aircraft carriers. Because of the danger of submarine attacks, carriers had to be refueled at higher speeds. As a Quartermaster, Ray spent much of his time on the bridge of the ship, helping navigate and plot courses. He remembered, “You wouldn’t believe how fast we were going during refueling.”

The Caliente made many dangerous trips, traveling from the Pacific war zone to the Middle East and back. They had to go around the tip of India and travel up through the Arabian Sea to ports in the Persian Gulf. After loading fuel, they returned and refueled ships in places like the Ulithi Atoll and Okinawa. Ray said that they were never attacked but they had a scary experience when they were caught in a Pacific typhoon. The Caliente was not seriously damaged but the Navy lost several destroyers.

Ray was aboard the Caliente, anchored in Tokyo Bay near the USS Missouri [BB-60] when the surrender documents were signed. After the surrender, the Caliente traveled to northern Japan, briefly, then on to Hiroshima by way of the Inland Sea. Ray recalled that the crew was apprehensive about meeting Japanese civilians, but that those they met were very friendly.

When the Caliente arrived at Hiroshima, the crew was allowed to visit the city. Ray recalled walking freely around the city amidst the devastation and ashes. At the time, the U.S. military was unaware of the dangers of residual radiation from the bombs. Ray couldn’t recall any health problems caused by his exposure.

Not long after visiting Hiroshima, Ray returned to the States on a troopship and disembarked at Treasure Island, California. From there, he took a train to New Orleans where he received his discharge from the Navy.

Ray worked for about a year for the Civilian Conservation Corps [CCC] in California before enrolling at LSU. His love for the outdoors drew him to the CCC. Ray helped build bridges and roads and he remembered topping giant redwoods as part of his job.

Ray enrolled at LSU under the GI Bill and earned his degree in forestry in 1951. He married Betty Jo Caldwell at the LSU Chapel in 1952. They would have three sons: Lowell Brent [Mona], Bryan Caldwell “Buzz” [Sarah] and Bartley Dale Sibley.

Ray was hired by Esso Standard Oil Company in Baton Rouge where he worked in sales. In 1962, he was moved to Gulf Breeze, Alabama, and placed in charge of sales for South Alabama and Northwest Florida. One of his customers was Fred Price who owned a Standard oil dealership in Andalusia, Alabama. At Fred’s encouragement in 1971, Ray bought property near Open Pond in Covington County, Alabama. Ray built a small cabin there and still owned the property at the time of his death.

Standard Oil became Exxon in 1972. Ray and Fred Price became best friends and enjoyed many happy memories of hunting and other good times together until Fred’s death in 1980.

One of Ray’s greatest pleasures was having his family visit and hunt at his Open Pond camp house. His grandson, Forrest [son of Brent] grew up enjoying those hunting trips and bought property near Bradley, Alabama. After joining the Air Force, he spent every leave with his grandfather in the woods in Alabama. Before Forrest deployed to Afghanistan in 2015, he asked Ray to get a few things done on the property in Bradley. They talked about hunting together when Forrest returned.

That hunting trip with his grandson never took place. Staff Sergeant Forrest B. Sibley was killed in Afghanistan on August 26, 2015. Forrest was a member of the 23rd Special Tactics Squadron, U.S. Air Force, stationed at Hurlburt Field, Florida. He had deployed to Afghanistan with the 21st Special Tactics Squadron as liaison for air-to-ground precision-guided munitions with Special Operations Close Air Support. Forrest and Air Force Captain Matt Roland were killed by Afghan soldiers at a roadblock in Helmand Province in what was called “a green on green” attack. The loss of Forrest was a tragedy for the family and Ray never got over it. In October 2021, the Alabama legislature passed a joint resolution naming a bridge on US 231 in Blount County, the USAF Combat Controller, SSGT Forrest B. Sibley, Memorial Bridge.

Ray Sibley’s wife, Betty Jo [Caldwell] Sibley, died in November 2020. Ray continued to live at his Open Pond property and enjoy his many friends who came to visit. He was an avid LSU Tiger football fan. He thoroughly enjoyed LSU’s National Championship in 2019.

Kevin Price, son of Ray’s friend, Fred Price, was a special friend who helped Ray in his later years. Ray was a longtime member of the First Baptist Church of Andalusia and the Men’s Baraca Sunday School Class. Ray’s friends from Sunday School were frequent visitors at his camp house at Open Pond.

Ray Sibley’s funeral will be held December 20, 2021, at Rose Lawn Funeral Home in Gulf Breeze, Florida. Ray will be buried at Rose Lawn Cemetery next to Betty Jo. Ray was predeceased by his wife, Betty Jo; his brother, George Warren Sibley and his grandson, Forrest Brent Sibley. He is survived by his sons Lowell Brent [Mona] Sibley; Bryan Caldwell “Buzz” [Sarah] Sibley; Bartley Dale Sibley; six grandchildren and one great-grandchild.

The author was privileged to know Ray Sibley as a friend and great American patriot. Visits with Ray were always great history lessons and when we parted, we always parted with a prayer. I will miss him.

[Much of this material came from conversations with Ray over several years. The author wishes to thank Mona S. Maddox, Brent Sibley and Buzz Sibley for their help].