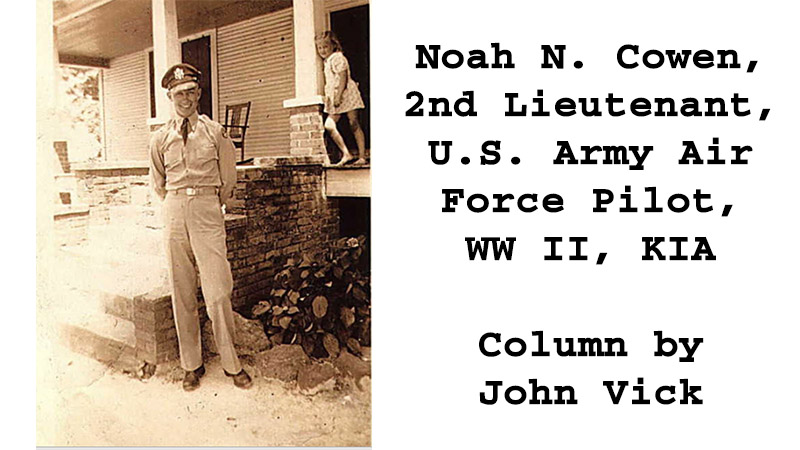 The author thanks Tom and Mike Cowen for their help in writing about their great-uncle Noah Nelson Cowen from Opp, Alabama. Like so many of his brothers-in-arms, Lt. Cowen died way too young. He never had the chance to start his own family and live out his dreams. America is forever in their debt. May we never forget!

The 350th Fighter Squadron’s Red Flight leader, Captain William F. Tanner, was the last person to see 2nd Lieutenant Noah N. Cowen’s P-51 Mustang over Wunstorf, Germany, on December 5, 1944. Their flight was escorting a crippled B-17 bomber when they were jumped by German fighters. Cowen’s plane was last seen being attacked by two German fighters.

Noah Nelson Cowen was born February 20, 1922 in the Curtis community in western edge of Coffee County, Alabama. His parents were Frederick Daniel and Susie Ham Cowen and Noah was the youngest of 10 children. They lived on U.S. Highway 84, east of Opp, Alabama. The Curtis community was a farming area and several Cowen families lived there. 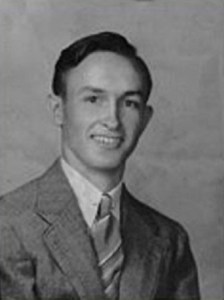 Cowen graduated from Opp High School in 1939 and was president of the senior class. He enrolled at Alabama Polytechnic Institute [now Auburn University] to study electrical engineering. In 1943, he enlisted in the Army Air Force and completed basic training at Miami Beach, Florida. Since he had more than two years of college, he applied for flight training and was accepted and sent to Jackson, Mississippi. It was probably during this time that Noah chose to visit his hometown. In the 1970s, his brother, Reg Cowen spoke about Noah flying over Opp High School and performing a barrel roll. He even landed his plane on a dirt road near his parents’ home in Curtis. Upon completing advanced pilot training in Mississippi, Cowen was commissioned a 2nd Lieutenant and assigned to fly the Army Air Force’s newest fighter aircraft, the P-51 Mustang.

2nd Lieutenant Cowen was sent to the European theater around August 1944 and assigned to the 353rd Fighter Group, 350th Fighter Squadron located at Raydon Airfield, about six miles from Ipswich, England. Like many other Air Force fighter pilots during that time, Cowen likely had little combat experience prior to that fatal flight on December 5, 1944. On that flight, he flew the P-51D Mustang, tail number 44-14538 with Margaret Two painted on the nose.

The Red Flight Leader that day was Captain William F. Tanner and Cowen was his trusted wingman. Their mission was to escort B-17s on a bombing run deep into Germany. After coming off the target near Wunstorf, Captain Tanner had his flight turn south away from the bomber track to avoid mid-air collisions. After they turned, they found a lone B-17 that seemed to be in trouble. The 350th base commander advised that they should stay with the B-17 and try to escort him back. The bomber was at 5,000 feet but rapidly lost altitude until he leveled out at about 500 feet. 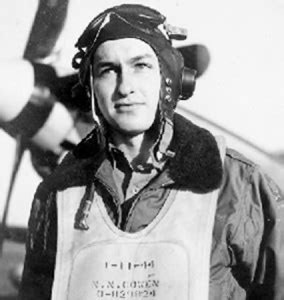 At around 1300 hours in the Steinhuder Lake area, Captain Tanner took his flight of three planes down to 500 feet near the B-17. After strafing a locomotive below, Tanner’s flight rejoined the B-17 when they were jumped by 15 + FW-190s [German Focke-Wulf fighters]. In the ensuing action, Red Flight managed to shoot down three of the FW-190s, but lost two of their own, 2nd Lt. Noah N. Cowen and 1st Lt. Alvin L. Deeds.

The action that cost the lives of two of the three pilots can best be described by Captain Tanner’s Missing Aircrew Report, “The 15 FW 190s came from under a cloud layer and pulled in back of the B-17 and shot him down. I had no choice but to turn, so I made a sharp left-hand orbit which took me in back of the 190s. I saw my wingman, Lt. Cowen, getting quite a few strikes on a 190 and then it caught fire. I had my sight lined up on a 190 and just as I pulled the trigger…I saw tracers coming over my left wing, one hitting me. I broke violently and as I broke, I felt several pieces of metal from a 190 hit my plane, one in the nose spinner and one in the gun-camera…I found myself 180 degrees to the FW 190 who was shooting at me. My number three-man, Lt. Deeds, was on his tail and gave him a long burst until it exploded. I then completed my turn and found myself in a gaggle of 190s…they were diving on Lt. Deeds, who was shooting at another 190. I picked out another 190 and shot. ….He hit the ground and immediately caught fire. I found three 190s on my tail, so I broke again and saw a 190 on Lt. Deeds’ tail. I called for him to break but he kept going straight and the 190 was scoring hits on him. Lt. Deeds’ plane caught fire and he hit the ground burning. I was still in a tight, climbing circle with three 190s on my tail when I saw Lt. Cowen with two 190s in back of him, scoring hits on his tail assembly. I called for him to break, but then tracers came in front of me, so I broke into a cloud layer at 3,000 feet.”

In his final report dated December 9, 1944, Captain Tanner had this to say about the two young pilots that were lost, “1st Lt. Alvin L. deeds had only just received his promotion that day…He was credited with one enemy aircraft destroyed in the action but was later confirmed as killed in action…Lt. Cowen was last seen with two 190s on his tail. They were scoring hits on his tail assembly. When he was called to break, no answer was heard from him, nor was he seen to take any evasive action. Lt. Cowen was last sighted at 1,000 feet.” 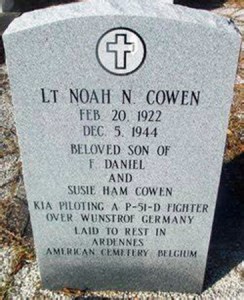 There is no conclusive evidence that 2nd Lt. Noah N. Cowen’s body was ever recovered. A German telegram from Wunstorf Air Field Headquarters dated December 5, 1944 reported that the crash site was 3 km. north west of Hohenhorst and 7 km. south of Wunstorf, and “pilot probably dead.” In a later telegram dated December 9, it stated that “the plane suffered 99 % damage, partly burst, lying in the water. Pilot probably under rubble [under water].”

The Ardennes American Cemetery is located in Neupre, Belgium. It shows that Cowen is interred there. The following is copied from their website: 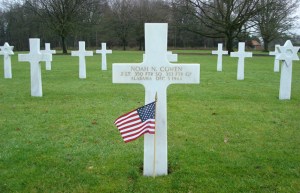 Two of Noah Cowen’s great-nephews, Tom Cowen of Jacksonville, Florida and Mike Cowen of Houston, Texas, provided much of the information to the author. Mike visited Noah N. Cowen’s gravesite in Belgium in 2005. Here is his recollection of that day:

“At the cemetery I met the American caretaker of the cemetery who was expecting me since I called ahead. He gave me a full tour of the grounds, the history, and so much literature about what took place in the Battle of the Bulge and the Ardennes and all the ferocious fighting that went on there. It was Hitler’s last real attempt to break through the Allied lines before being surrounded themselves on all sides. The Germans were almost fanatical in this huge Offensive campaign. But what really got me was when I made it to Uncle Noah’s grave site who I never got to meet, the caretaker played a very loud recording of Bugle Taps over the loud speakers. It was a very moving moment for me. He gave me a cup of sand, that he said came from the beaches of Normandy at D-Day, so I could get the markings on the white sand stone grave cross to show up better to be read and photographed- a very powerful moment again for me. It was not an easy trip to get to Liege and that winter was super cold, but I’m sure glad that I did. “