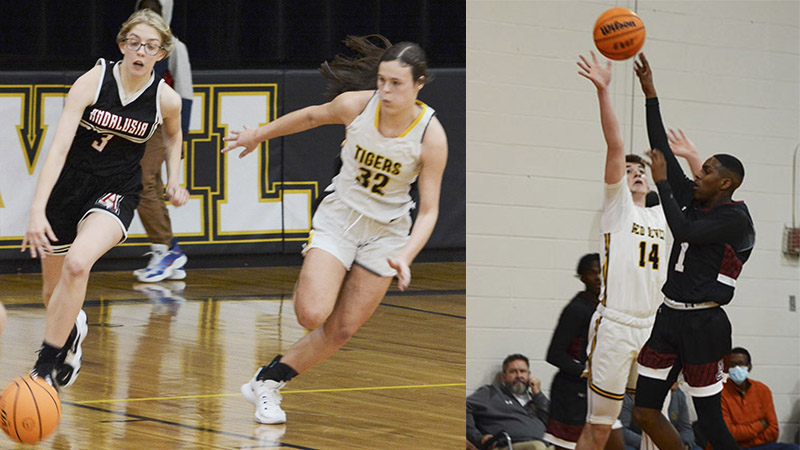 In varsity girls’ action, the Lady Bulldogs (9-4) took a big lead in their game and held on down the stretch for a 42-32 win.

It was a big 17-4 lead after the opening period. Zanyia Anderson started with a pair of threes and had eight points in the first. Kaitlyn Beverly had a three as the Lady Tigers (11-5) struggled to get an offensive rhythm going. Both sides were nearly even in the second as there were 17 combined points. Dianna-Grace Nelson buried another three-pointer, and Anderson added her third in a seven-point effort for Andalusia. Ruby Carroll put up three for Red Level as Mariah Crowell and Elizabeth Cross got in the scoring column with two each. The big advantage from the opening eight minutes stood firm as the halftime score was 27-11.

RLS came out after halftime and began making a comeback bid. Beverly hit a clutch three with two-pointers by Ke’mariah Crittenden, Crowell, and Carroll. The nine-point performance on defense paved the way to the defense having a productive showing. Taya Newton and Anderson posted two apiece in the third, and AHS maintained its lead going to the fourth at 31-20. The offenses both woke up with double-digit showings in the final period. Crowell had a pair of baskets, while Cross and Beverly both had three points. Crittenden picked up another field goal as the Lady Tigers scored a dozen. Newton chipped in four points for the Lady Bulldogs, and Cape Merrell found the net for the first time in the final stanza. 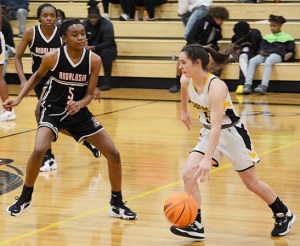 “We played really well in the first half, and in the second half, we lost our intensity a little bit. We didn’t play as well as we did before halftime and got ourselves out of position. We fought back right there toward the end and made sure we held on to the big lead we had built. We’ve actually been missing three starters, so this was good for us to win tonight,” AHS Head Coach Bennie Shellhouse said.

RLS Head Coach Bridges Anderson said his varsity girls suffered two defeats from two good teams. “We are having trouble in the areas of rebounding, passing, and protecting the ball. As coaches, we will try to correct these problems as soon as possible. We look forward to returning to area play and seeing if we can make those improvements.”

Anderson earned 15 points to pace Andalusia in the win. Newton and Nelson followed with eight and seven, respectively. Beverly and Crowell led the charge for Red Level with nine points each. The Lady Bulldogs routed Opp on the road 47-18 in their first game back from the break Friday, Jan. 11. The Lady Tigers won two of three area games over Brantley and McKenzie but fell in Georgiana.

In the varsity boys’ game, the Tigers (15-5) avoided the sweep with a 66-51 win after an earlier loss in December.

Both teams came out on fire in the first as Aksh Patel, Tevin Sigers, and Cammeyun Love all had three for the Bulldogs (6-12). Dominic Williams and Malikye Wright both had for Red Level, who led 16-15 after one. Bryce Dorsey had six points in the second for Andalusia, and Brendan Davison added a three-pointer. Javen Poindexter and Demarcus Johnson combined to light up the floor and free-throw line with 11 and seven points, respectively. That allowed RLS to increase its lead over AHS at halftime 34-24.

Andalusia closed the deficit to single digits with a 14-point effort in the third led by Davison with eight points. Johnson and Poindexter continued to be a force as Jamari Brown picked up his first basket. Red Level had 10 points in the frame and clung to a 44-38 lead after three. The Tigers responded with a huge fourth period and once again had Johnson and Poindexter combine for 18. Davison and Patel each had six for the Bulldogs in the final eight minutes. 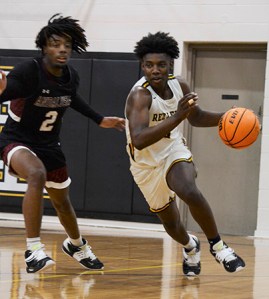 Brendan Davison, left, plays defense for the Bulldogs and keeps up with Demarcus Johnson during an offensive play for the Tigers.

“We played two very good teams back-to-back and were very fortunate to get both wins for the varsity boys. Our boys played fast, hard, and smart. I was afraid that fatigue was going to be a factor, which two players experienced in the Andalusia game, but they reached down and recovered. Our bench players played a vital role in assisting with both wins in Georgiana on Monday and tonight (Tuesday) against Andalusia,” Anderson said.

Poindexter tallied 29 points to lead RLS, and Johnson finished with 20. Davison was the top AHS scorer with 19 and followed by Patel at 12. The Bulldogs fell 60-45 at Opp on Friday, Jan. 11. The Tigers fell in their area opener at Brantley 90-84 but fought back with an 83-47 win over McKenzie and 66-55 win at Georgiana. The win on the road at GHS was significant in that it was the first home area loss for the Panthers in eight years.

Andalusia (2-4) routed Red Level (3-12) 47-18 in the B-team game. Elijah Bradley led the Bulldogs with 15 points. Xavier Hourel and Ashton Bailey finished with eight and six, respectively. The Tigers were led by Brian Davis, who had seven points in the loss.

Both schools are scheduled to continue area play Friday, Jan. 14 at home. Andalusia will welcome Charles Henderson, while Red Level will meet Brantley. Action gets underway at 4:30 p.m. for both teams with the B-team game.