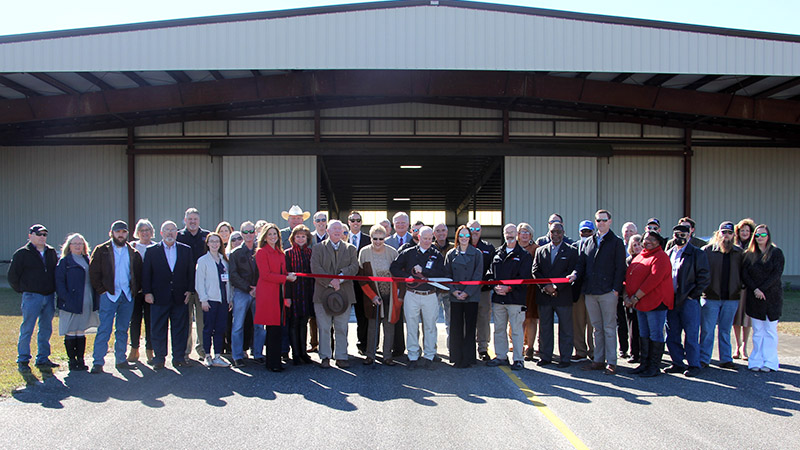 A ribbon cutting was held for the opening of Medical Air Rescue Company on the grounds of the South Alabama Regional Airport on Tuesday.

MARC, which began providing medical air transport services from the South Alabama Regional Airport base in November, is home-based in South Dakota.

The company’s director of medical operations, Ken Maraman, who is a native of this area, said MARC has gotten a good start locally. Even as area officials were gathering for the ribbon cutting, the company’s King Air C-90 left the hangar for a medical flight.

“I grew up in this area. I flew helicopters from the early 2000s until 2016 when Sacred Heart closed our program (in Pensacola). That left a void in this area, from a fixed-wing standpoint, of being taken care of. We’ve always been talking about doing something in this area to fill that void,” Maraman said.

Often flights involve taking patients on long trips that could be several states away. To help the patient and ease the burden, Maraman said MARC allows for a family member to fly along with the patient.

“When you start taking families and breaking that nucleus … one of the big things as medical professionals is being able to maintain that family support. Being able to take a family member with us is huge in our world and what we want to do and a lot of others can’t do that,” he said.

Most of MARC’s flights involve emergency situations, but it may also involve getting patients to other appointments at distant locations.

“For years I flew here and a lot of times there were missions we could not get here due to storms. Now, we are already here and we can fly higher and faster meaning we can go above or around the bad weather,” Maraman said.

MARC has a large hanger at SARA that provides room for expansion if needed.

“I would love to put a couple of aircraft here to assist the citizens of this area. It is a growth process that we want to work toward. We’re just very excited to be here in this area because we feel it is an underserved area and that is where we shine,” he said.

Mayor Earl Johnson expressed his thanks to MARC for bringing the company here, and to the South Alabama Regional Airport Authority for working with them on a location.

“Every time we have a ribbon cutting celebrating a new business, we know that that business will make a difference in some lives. But it is rare that we get to celebrate a new entity that will make a life and death difference in the lives of local residents.

“We have already seen examples of this life and death difference in the days and weeks since Medical Air Rescue Company (MARC) opened in doors in Andalusia. Having them here can be a game changer for local residents, and is just one more way we set ourselves apart as a rural community,” Johnson said.