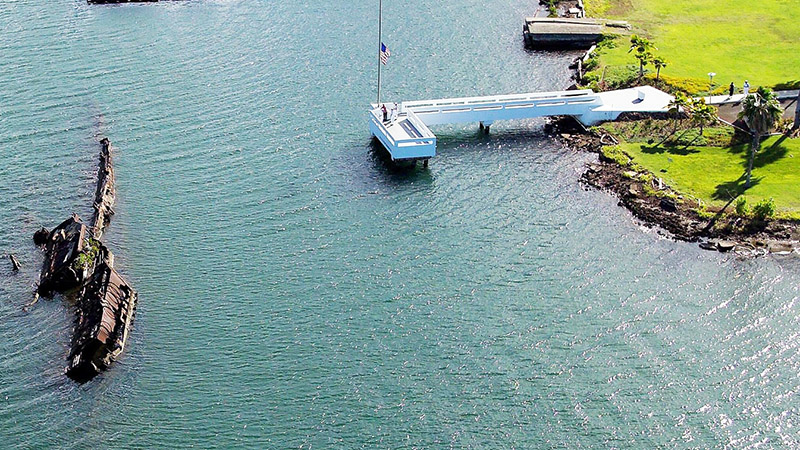 USS Utah Memorial near Ford Island, Pearl Harbor, Hawaii. The rusting hull of the Utah rests near the spot where she went down on Dec. 7, 1941. [Photo: Phillip Gault]

S2C George J. Chestnutt, Jr., a native of Andalusia, Covington County, Alabama, was a member of the Deck Division onboard the USS Utah during the Japanese attack on Pearl Harbor.

The USS Utah [AG-16] was a former battleship, converted to target ship, and was lying, quietly at anchor, just off Ford Island in berth F-11, on the morning of December 7, 1941. A little before 8 a.m., the Sunday morning peace was shattered when large numbers of Japanese planes appeared, flying low over the harbor, dropping bombs and torpedoes. Utah might not have been attacked if the Japanese pilots had looked at her more closely.

Under the terms of the London Naval Treaty of 1930, Utah had been converted into a radio-controlled target-ship. All of her primary and secondary weapons had been removed, including her five, twin-turret 12-inch main guns. The barbettes remained and were covered with box-like structures which went unseen by the attackers. The planes launched six torpedoes, two of which struck the Utah. The massive flooding that quickly followed caused the Utah to list to port and settle by the stern. Abandon ship was sounded and the crew quickly began leaving by any means possible, most of them swimming. The Utah remained afloat for about 12 minutes, thanks in large part to the heroics of Chief Watertender Peter Tomich. He remained below decks and kept vital machinery running as long as possible. Chief Tomich went down with the Utah and would be awarded the Medal of Honor posthumously. After the Utah had capsized, tapping was heard from the hull. Commander Solomon Isquith led a rescue effort that cut through the hull and rescued 10 men. Some 461 sailors survived but 58 officers and enlisted men died, including Seaman Second Class George Jefferson Chestnutt, Jr., who was blown overboard during the attack and presumably lost at sea. Only four of the 58 bodies were recovered.

George Jefferson Chestnutt, Jr. was born April 7, 1924 in Andalusia, Covington County, Alabama. His parents were George Jefferson and Bessie Parker Chestnutt. They had a daughter, Sarah, who was six years old at the time. George Sr. was employed as an electrician and was divorced from Bessie by the time young George was four years old. Bessie would have another daughter, Ada Ruth, after George Sr. had left the home. George, Sr. died in 1931. 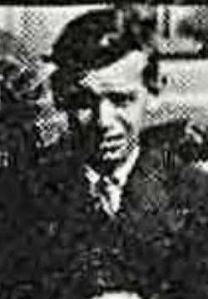 Only known photo of SN2 George J. Chestnutt who was aboard the USS Utah [AG-16] during
the Pearl Harbor attack. He was blown overboard and his body never recovered. [Photo: ancestry.com]

In 1934, Bessie married Grover Velliquette and moved to Toledo, Ohio. George, Jr. attended schools there and had attended Woodward High School one year before he quit in 1939. George worked briefly before joining the Navy in April 1941, at the age of 17.

After basic training, George was assigned to the USS Utah, a former battleship, converted to a training and target ship. The Utah had just undergone overhaul at the Puget Sound Navy Yard and returned to Pearl Harbor at the time. During the overhaul, she was equipped with new single-mount, 5-inch/38 caliber dual-purpose guns [for surface and anti-aircraft firing] that were to be used for training. The presence of those guns may have sealed her fate on December 7.

After the attack, the surrounding area was searched but the body of S2C George J. Chestnutt Jr. could not be found and he was presumed to have been “lost at sea.” A memorial marker for Chestnutt was placed at the National Memorial of the Pacific in Honolulu. Records record that he is listed in the Courts of the Missing. 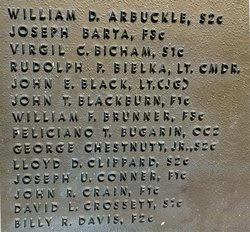 Chestnutt’s name on the plaque at the Memorial aboard the USS Arizona listing all those
lost in the Pearl Harbor attack. [Photo: Bill Vincent]

Subsequent efforts to salvage the Utah were unsuccessful and she was stricken from the Naval Vessel Registry in September 1944. The sailors entombed within the ship were never recovered and she is considered a war grave. Several memorial plaques were placed at or near the wreck including one on the ship. In 1972, a larger memorial was erected just off Ford Island, consisting of a 70-foot, white, concrete walkway leading out to a platform in front of the ship. A brass plaque and flagpole were placed on the platform. The Utah Memorial is part of the Pearl Harbor National Memorial which includes the Arizona Memorial. The ship’s bell from the Utah was recovered and currently is on display at the Naval Science Building at the University of Utah.

Postscript: As noted above, 54 bodies were entombed within the Utah. In an ironic twist of fate, it was later learned that the ashes of a baby girl also went down with the Utah.

A member of the crew, Chief Yeoman Albert T. D. Wagner had stored in his locker onboard, an urn with the ashes of his baby daughter, Nancy Lynne. He was waiting for a Chaplain to be assigned to the Utah so that a proper burial at sea could be performed. Nancy Lynne and twin sister, Mary Dianne Wagner had been born prematurely in 1937 at a Catholic hospital in the Philippines. Nancy Lynne died two days later and her body was cremated. Chief Wagner had wanted his baby daughter’s ashes to be scattered at sea with a proper ceremony but it never happened because of the Pearl Harbor attack. In an interview in 2000, the surviving twin-sister of Nancy Lynne, Mary Dianne Wagner Kreigh said, “I don’t think there is a better tribute to my twin-sister than to have all those wonderful and brave men guarding her. It would have been wonderful if she had lived, but since she did not, I feel nothing but pride and pleasure that she is in such magnificent company. I could not have asked for anything better than for her to be tenderly, carefully looked after by America’s finest.” 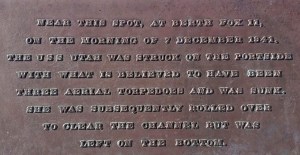