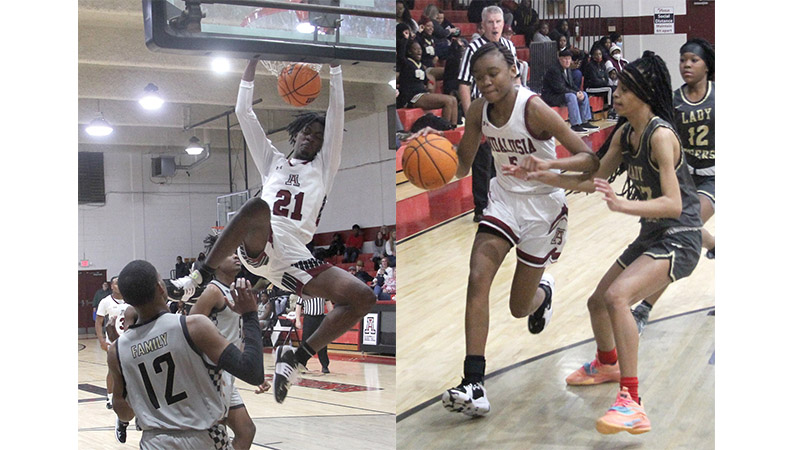 LEFT: Bryce Dorsey slams the ball through the hoop for the Bulldogs. RIGHT: Zanyia Anderson works the ball downcourt against a Greenville defender. (PHOTOS BY ROBERT BLANKENSHIP)

The Andalusia Lady Bulldogs scored an area win, pulling away from Greenville in the second half to notch a 61-56 victory.

The boys’ squad fell behind early and could not make up enough ground as they fell to the Tigers, 67-51.

The girls’ teams stayed close throughout the first half with the Lady Bulldogs holding a one-point lead after the first period, 11-10, and at the end of the second period managed to stretch the lead to only two, 24-22.

The Lady Bulldogs heated up in the third period due in large part to Zanyia Anderson who hit two threes and ended the quarter with 12 points. Andalusia outscored the Lady Tigers in the third, 24-14 to take a 48-36 lead into the fourth period.

Greenville was able to cut into the Lady Bulldog lead, but it was not enough as Andalusia held on for the five-point victory.

The girls’ have an overall record of 10-9 with a 1-3 record in 5A Area 4. After hosting Pleasant Home on Tuesday, the Lady Bulldogs will travel to Straughn on Friday.

In the boys’ game, Greenville jumped to a big lead after a huge second period.

The Bulldogs stayed close through one period, only trailing by three, 15-12. But, Greenville exploded with 29 points in the second period to take a 44-24 halftime lead.

The Bulldogs were unable to cut into the deficit in the second half, managing to only get within 10 at one point in the fourth period.

The loss drops Andalusia to 7-18 and 0-4 in 5A Area 4. The Bulldogs played Pleasant Home on Tuesday night and will travel to Straughn on Friday, Feb. 4.