McCollough runs to scholarship at University of Mobile 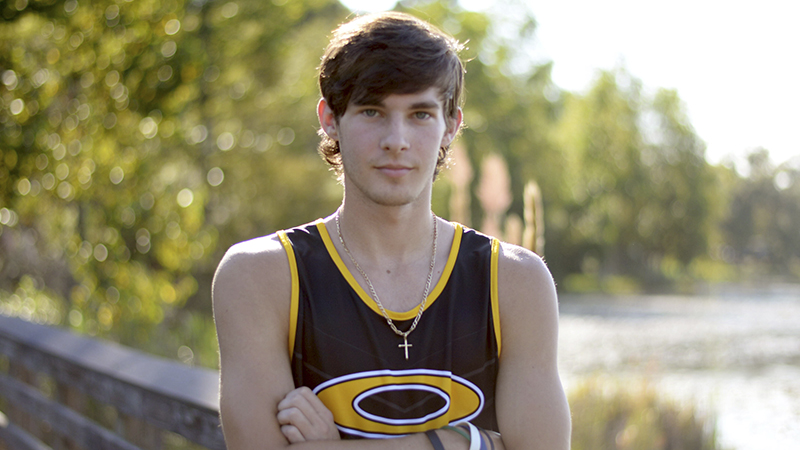 Fueled by his faith, Lain McCollough has spent countless hours running cross country and track in high school, which has led to a scholarship to compete at the University of Mobile.

Now a senior at Opp High School, he began running track in the seventh grade and cross country in the eighth grade.

“I have an older friend that kept trying to get me to run with him on the team. I gave in to the pressure and decided to try out. The relationships made between us runners grabbed my attention the most. When we are all at practice, it’s like one big family competing against each other. At the same time, we laugh and share stories and would do anything to help make each other better. Whether you are first or last at a meet, you always have other teams cheering for you. You get to have relationships with other runners from other teams that can grow into lifelong friendships,” McCollough said.

He is excited to make new acquaintances at the University of Mobile, where he will study Theology and run cross country and track.

“I am looking forward to building new relationships that will be made during my time in college. It wasn’t so much I chose this field; I felt I was called into this field. For the longest time, I wanted to be a lawyer because I loved history and loved taking what I knew from history and the law to solve conflicts. Even though I was dead set on wanting to be a lawyer, God put many different people and situations in my life who showed me His plan for my life was in the ministry. I have always enjoyed church and helping others where I could.”

The opportunity to run for the Rams means a lot. “It shows Coach Andy believes in me and is willing to coach and help me to grow more as an athlete as well as a student. It also means a lot because it shows he sees a possibility of me being a helpful asset to the track and cross country teams.”

McCollough was grateful to have had this experience at Opp. “There have been a lot of friends I have looked up to over the years who pushed me to become better and never get satisfied where I was. The friends and coaches made it wonderful, but the community did as well. There have been many friends made from being at the track after practice hours or running local 5Ks around the community. They always ask about the season and how the team looks from year to year,” he said.

Being an Opp Bobcat means a lot to him.

“To me, being an Opp Bobcat is like being an underdog. Opp is a small, little town not many people know about unless they are local. The underdog role comes in big at sports. Out of the 10 teams in our section, four are private schools. I know from the kids of those schools that when they play Opp in sports, it’s not a very nerve-racking game. Whether it’s on the track or the cross country course, they always look the most professional. You have to prove to them you are their competition and give them a reason to not overlook you,” McCollough said.

He added that his biggest accomplishment in high school was making strong friendships.

“We always build each other up and are here for each other in whatever it may be. Not only do they help push me in athletics, but they also help build my integrity. Whether it’s attending church trips, having Bible studies, going out to eat, or even going to the movies, we always keep each other on the right path and hold each other accountable.”

McCollough understands there will be a big adjustment between running in high school and college. “One reason is the competition will be a lot higher. Everyone who runs at college is there to get better and prove they are good enough to run at the college level. For cross country, the distance you run is longer. You go from running 3 miles to 5 miles,” he said.

The support of his family and friends laid the foundation for what he hopes is a successful future.

“The more people you have in your corner backing you, the easier it is to keep going and not give up. When times get hard or when life gets you down, it is not easy going through it by yourself. It helps a lot to have friends and family to come alongside you and pick you up and be there for you. I see myself being out of college working a job where I can utilize my degree in the next five to 10 years. I also see myself buying a house and starting a family as well.”

He is the son of Lance and Kelly McCollough and the grandson of Roger and Judy McLain. His younger brother, Ben, is eight years old and a student at Opp Elementary School.

“I am always seeking the opportunity to add individuals who are hard-working at practice and in the classroom most importantly. When speaking with Lain and his family, I felt that he would be a great fit in our program allowing me the opportunity to maximize his potential as an athlete and most importantly life after college. I look forward to having Lain in the fall of 2022,” University of Mobile Head Coach Andy Canegitta said.