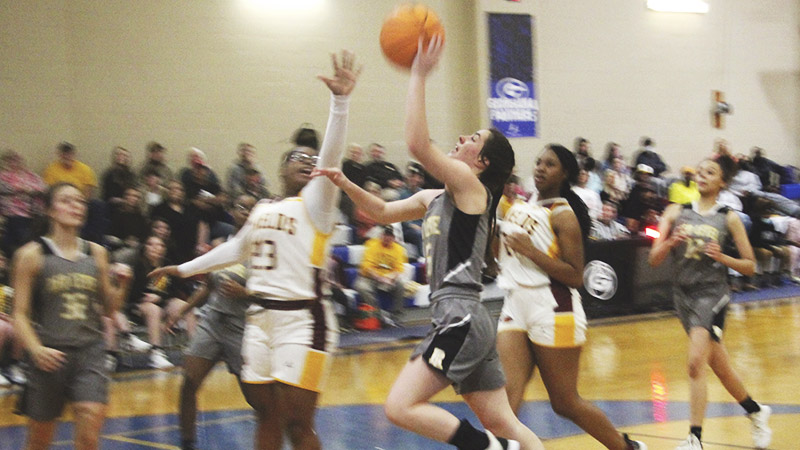 Red Level's Elizabeth Cross goes up for a basketball in the first round of the area tournament. Cross finished the game with 19 points to help lead the Lady Tigers over J.F. Shields, advancing to the area title game against Georgiana on Saturday.

The Red Level Lady Tigers battled closely with the J.F. Shields Lady Panthers Wednesday in the opening round of the 1A Area 3 basketball tournament hosted by Georgiana. Down the stretch, Red Level managed to pull away for a 61-52 victory and a chance to play for the area championship.

In the early going, the Tigers and Panthers remained within a basket of each other. Kaitlyn Beverly’s six points lifted Red Level to a 14-12 lead after one period.

The second half started much like the first with Red Level outscoring J.F. Shields in the period, 14-12, to tie the game at 40-40. Ruby Carroll led the Lady Tigers with eight points in the period.

The final period — with both teams’ season hanging in the balance — remained close in the early minutes with the teams each exchanging baskets. Beverly, Carroll and Elizabeth Cross each scored baskets for the Lady Tigers in the final period. Those baskets ultimately forced J.F. Shields to foul, sending Red Level to the line where they were almost perfect to put the game away. Cross was perfect at the free-throw line, hitting six straight in the final period.

With the victory, the Lady Tigers will return to Georgiana on Saturday, Feb. 12, to take on the host team for the area title at 5:30 p.m. Georgiana defeated Brantley, 50-34, Wednesday night to advance to the area final.

The Red Level boys’ team faced Brantley Thursday in their opening game of the tournament. The Tigers came up short to Brantley by a final score of 72-64.

Red Level’s boys end the season with a 20-9 final record.